US Bids to Erase its Lao Past 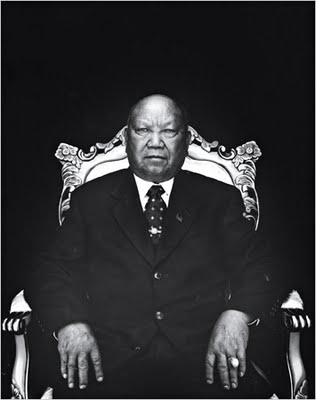 General Vang Pao (Opium? CIA? Air America? - fringe "conspiracy theories," bottomless lunacy -- besides, prosecution could affect the morale of the CIA's torturing jackals ... and Rupert Murdoch's partner Peter Abeles was instrumental in setting up Nugan Hand, the CIA bank used to launder the opium proceeds ... let's drop this embarrassing case. " ... Some believe the decision to drop the case was prompted by a realization that continued prosecution of Vang Pao in court could be embarrassing for the US .... " and Rupert Murdoch, Gen. John Singlaub, etal. ... )

However, a new indictment issued by a California court against a dozen men - 11 of them ethnic Hmong and a former US Special Forces officer during the Vietnam War - raises new questions about connections between anti-government insurgents in Laos and their ethnic brethren in the US.

The new indictment claims a dozen men - including 10 mentioned in the previous dropped charge - violated the Neutrality Act by giving money, weapons and material support to Hmong rebels in Laos, who have continued their resistance against the Lao government since the Vietnam War. The indictment also contains new charges, including conspiracy to receive and transport explosives through interstate and foreign commerce.

Hmong supporters of Vang Pao and many of his former CIA handlers say the federal government's case lacks substance and reads like the plot of an action movie. The case stems from a tip received by investigators in 2006 by a man the US government termed a "defense contractor", but whose main vocation seems to be selling potions he claims cures chronic diseases, including cancer.

The tip sparked an investigation in 2007 by a federal anti-terror task force in Sacramento, California, which it claimed was a US$26 million plot to overthrow the Lao government.

Vang Pao's arrest, however, sparked at least one mass protest among the Hmong community in the US. Because Vang Pao is not included in the new case, it is not expected to draw as much media and public attention. US Attorney Lawrence G Brown of the Eastern District of California, said the charges against Vang Pao had been dropped "based on the totality of the evidence in the case".

In a court motion, Brown wrote, "The government believes, as a discretionary matter, that continued prosecution of defendant Vang Pao is no longer warranted." And in a news release, he said prosecutors could drop charges for a variety of reasons, including vaguely "other consequences if the person is convicted".

Some believe the decision to drop the case was prompted by a realization that continued prosecution of Vang Pao in court could be embarrassing for the US, particularly as Washington bids to forge closer ties to the Lao government. The US re-established full diplomatic relations with Laos in 1992 and granted it Normal Trade Relations (NTR) status in 2004. A bilateral trade agreement entered into force in February 2005 and the two sides exchanged military attaches in 2008.

In June, US President Barack Obama removed Laos and Cambodia from a blacklist that limited government support for companies doing business in both countries. The move was intended to open the way for more US investment in both countries by allowing American companies to apply for financing through the Export-Import Bank of the United States for working capital guarantees, export credit insurance and loan guarantees.

Laos does not represent a large or high purchasing power market for US companies. American exports to Laos were a mere US$18 million last year, while Lao exports to the US tallied $42 million. United States trade with Thailand and Vietnam, in comparison, amounted to $30 billion and $15 billion respectively. At the same time, the US is keen to counterbalance China's rising influence in the region, including in Laos.

Chinese companies have recently moved into Laos in a big way, with Beijing widely recognized as Laos' biggest economic patron. China has financed the construction of major roads, including the recently completed Route 3 linking China and Thailand through northwest Laos, and other high-profile projects such as the National Cultural Hall in downtown Vientiane and the main stadium for the biennial Southeast Asian Games to be held in the capital city in December. ...

Vang Pao, Drugs and the CIA

Who is Vang Pao? Two online sources are helpful if not disturbing in how they portray the Hmong general for whom a new Madison elementary school will be named.

The transcript for a May 17, 1988, investigative report by PBS's Frontline -- "Guns, Drugs, and the CIA" -- names Vang Pao as a key player in the drug trade during the Vietnam War. The report directly connects the transport of opium and its conversion into heroin to the Hmong CIA mercenary army fighting an undeclared war against the North Vietnamese and Laotian communists.

The Hmong raised poppies for opium as a traditional cash crop. But the war disrupted the market, the report says, prompting Vang Pao's army to buy the opium from Hmong villages and transport it for sale via the CIA-controlled Air America and Vang Pao's own airline.

"I know as a fact soon after the army was formed the military officers soon got control of the opium trade," photojournalist John Everingham told Frontline. "It helped not only them make a lot of money and become good loyal officers to the CIA, but it helped the villagers. The villagers needed their opium carried out and carried over the land in a war situation that was much more dangerous and more difficult, and the officers were obviously paying a good price, 'cos the villagers were very eager to sell to the military people."

"Vang Pao wanted control of the aircraft," said pilot Ron Rickenbach. "It would give that much more freedom and that much more flexibility to use these aircraft to go out and pick up the opium that needed to be picked up at this site or that site and to bring it back to Long Chien, and there was quite a hassle, and Vang Pao won.

"The way they got around that," the pilot explained, "was to concede, to create for Vang Pao his own local airline, and Xieng Kouang airline came into reality as a direct result of this compromise.... That aircraft was largely used for the transshipment of opium from Long Chien to sites further south."

"Oh, he was making millions," and he put the money in "U.S. bank accounts, Switzerland, wherever," Poe said.

Vang Pao and his many Hmong supporters in the U.S. have strenuously denied the heroin connection over the years. But in the Frontline documentary, Joe Nellis, a former chief counsel for the House Select Committee on Narcotics, flatly says: "Van Pao had a heavy hand in the production of heroin in that area."

A fuller but still troubling picture of Vang Pao emerges in the winter 2000 issue of the Hmong Studies Journal. It contains 'Warlord," a chapter from Keith Quincy's book, Harvesting Pa Chay's Wheat: The Hmong and America's Secret War in Laos [PDF].

With a touch of Al Capone, it seems.

The chapter's abstract credits Van Pao with creating a political machine with "a vast system of patronage and graft designed to co-opt clan notables (many of them potential political rivals) and, if this failed, a program of assassination for troublemakers."

Vang Pao used CIA money and sponsorship, Quincy says, to create "a massive system of welfare that would eventually make more than a 100,000 Hmong dependent on him for their survival."

For the CIA's purposes, the Vang Pao's army would become the U.S. version of the Viet Cong -- "an indigenous guerrilla force that harassed and bled a militarily superior enemy, frustrating him at every turn."

Quincy, as does other chroniclers of the secret war, credits the Hmong army for being a ferocious fighting force and Vang Pao for being an inspired political and military leader. The CIA was appreciative, and its subsidy was so bountiful, Quincy notes, that Vang Pao was able to pay his soldiers ten times more than soldiers in the Royal Laotian Army received."For thousands of poor Hmong peasants earning less than lowland rice farmers, soldiering for Van Pao was a way to abandon a life of grinding poverty for one of relative affluence," he writes. "Eldest sons had the right to take the place of wounded or killed fathers to keep the family on the military dole."

In time, as the war worn on and Hmong casualties kept mounting, Quincy writes, "young teenagers replaced their dead elder brothers, creating platoons of Lilliputian soldiers in baggy uniforms with sleeves rolled up to the elbows to free tiny hands for the operation of man-size weapons."

Vang Pao, in other words, was using child soldiers to fight the communists.

Quincy explains that money, rice and weapons were sent to Hmong villages that supplied young men for his army. They also benefited from the general's push to establish some 300 elementary schools in Hmong villages -- a program that is cited today as a major reason for naming the new Madison school for Vang Pao.

But Hmong villages that refused to turn over their young men for his army paid a price. They were considered pro-communist and might be bombed, as happened to the village of Long Pot.

Vang Pao also used marriage -- he was reportedly a polygamist with eight wives -- to consolidate the 18 or so Hmong clans under his leadership.

His first marriage was for love, Quincy writes, the rest were politically motivated -- "an effort to forge family links to powerful clan leaders or as a goodwill gestures to the disaffected."

As for his use of assassination, Quincy says it was another technique to maintain his power. How many times he resorted to killing troublemakers isn't clear, he says, but one member of his inner circle "believed there may have been dozens; hardly a reign of terror but substantial nevertheless."

Quincy paints a more nuanced view of Vang Pao's involvement in the drug trade than other chroniclers, but still leaves no doubt that it was considerable.

"Vang Pao had mixed feelings about opium," he writes. "He preached against the evils of addiction, but was pragmatic with addicts; occasionally he airdropped opium to troops in the fields so addicted soldiers involved in a prolonged campaign would not suffer withdrawal and impede the effectiveness of their unit. Nor did he have any reservations about trafficking in the drug if it advanced his ends."

Quincy traces Vang Pao's involvement in the opium trade to 1963 when he desperately wanted to add more soldiers but lacked the money to pay them. "He used military helicopters to collect opium from mountain villages and delivered the narcotics to merchants in central Vietnam where opium fetched top dollar."

The Russians tried to subvert Vang Pao's opium operation, Quincy writes, by shipping 15 tons of silver and 3.5 million feet of cloth to North Vietnam in a failed to effort to buy the drug from the villagers before Vang Pao's troops bargained for it.

The Frontline investigation points out a profound irony: As drug problems worsened among U.S. troops in Vietnam and back home, President Nixon ordered the CIA to participate in a new program aimed at stopping the trafficking.

The incongruity didn't go unnoticed in the field when an unnamed intelligence agent filed a report, according to Frontline, questioning the CIA's role in drug interdiction when the agency "was, in fact, facilitating the movement of opiates to the U.S."

Former CIA agent Victor Marchetti explained the incongruity this way to Frontline: "I doubt that they had any strong deep understanding of what they were allowing to happen by turning their head the other way and letting Vang Pao ship his dope out, which was made into heroin which was going to our troops, which was corrupting people through Southeast Asia and back here...."

A cynic might conclude that the Madison school board overlooking Vang Pao's checkered past is just another example of how government officials avert their eyes from unpleasant facts when they're consumed by a single goal.

In this case to honor a Hmong hero with a bloody history.