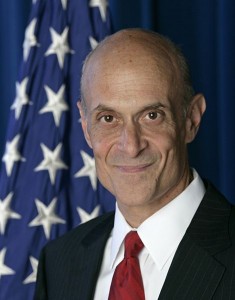 Michael Chertoff, Former Department of Homeland Security, is the head of the Chertoff Group, the lead cheerleader for what is being called the Full Body Scanner Lobby, reports the Washington Post and the Washington Examiner.

Here is a Chertoff quote from the New York Times on December 29th.“If they’d been deployed, this would pick up this kind of device,” Michael Chertoff, the former homeland security secretary, said in an interview, referring to the packet of chemicals hidden in the underwear of the Nigerian man who federal officials say tried to blow up the Northwest Airlines flight.

"Mr. Chertoff should not be allowed to abuse the trust the public has placed in him as a former public servant to privately gain from the sale of full-body scanners under the pretense that the scanners would have detected this particular type of explosive," said Kate Hanni, founder of FlyersRights.org, which opposes the use of the scanners. ... 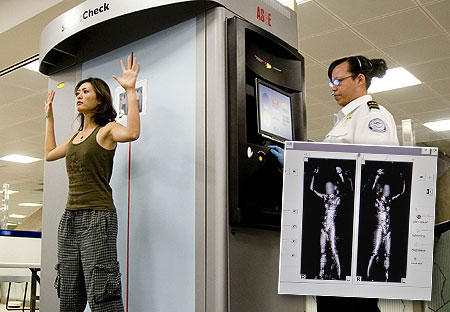 The degradations of passing through full-body scanners that provide naked pictures of you to Transportation Security Administration agents may not mean that the terrorists have won -- but they do mark victories for a few politically connected high-tech companies and their revolving-door lobbyists.

Many experts and critics suspect that the full-body "naked scanners" recently deployed at U.S. airports do little to make us more secure, and a lot to make us angry, embarrassed and late. For instance, the scanners can't see through skin, and so weapons or explosives can be hidden safely in body cavities.

But this is government we're talking about. A program or product doesn't need to be effective, it only needs to have a good lobby. And the naked-scanner lobby is small but well-connected.

If you've seen one of these scanners at an airport, there's a good chance it was made by L-3 Communications, a major contractor with the Department of Homeland Security. L-3 employs three different lobbying firms including Park Strategies, where former Sen. Al D'Amato, R-N.Y., plumps on the company's behalf. Back in 1989, President George H.W. Bush appointed D'Amato to the President's Commission on Aviation Security and Terrorism following the bombing of Pan Am Flight 103. Also on Park's L-3 account is former Appropriations staffer Kraig Siracuse.

The scanner contract, issued four days after the Christmas Day bomb attempt last year, is worth $165 million to L-3. 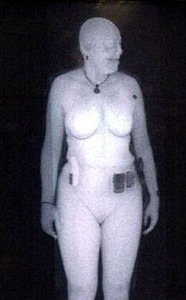 Rapiscan got the other naked-scanner contract from the TSA, worth $173 million. Rapiscan's lobbyists include Susan Carr, a former senior legislative aide to Rep. David Price, D-N.C., chairman of the Homeland Security Subcommittee. When Defense Daily reported on Price's appropriations bill last winter, the publication noted "Price likes the budget for its emphasis on filling gaps in aviation security, in particular the whole body imaging systems."

An early TSA contractor for full-body scanners was the American Science and Engineering company. AS&E's lobbying team is impressive, including Tom Blank, a former deputy administrator for the TSA. Fellow AS&E lobbyist Chad Wolf was an assistant administrator at TSA and an aide to Sen. Kay Bailey Hutchison, who sits on the Transportation and Defense subcommittees of Appropriations. Finally, Democratic former Rep. Bud Cramer is also an AS&E lobbyist -- he sat on the Defense and Transportation subcommittees of the Appropriations Committee.

The full-body scanners have caused an understandable uproar. Even before the devices were rolled out, they sparked predictable mischief: During training on the scanners, a group of TSA workers noted and mocked the genitalia of the guinea-pig employee sent through the scanner. The guy soon beat down one of his mockers and was arrested for assault.

After assurances by contractors and the TSA that the nude images of the scanners' subjects weren't being stored and saved, the U.S. Marshals Service admitted that it had stored thousands of such images.

Homeland Security insists that the "naked scans" are optional, but if you're randomly selected for one and you "opt out," you're subject to a very intimate frisk.

There's good reason to doubt these scanners significantly reduce the chance of a successful terrorist attack on an airplane. Deploying these naked scanners was a reaction to Umar Farouk Abdulmutallab's failed attempt to blow up a plane on Christmas 2009, but the Government Accountability Office found, "it remains unclear whether [the scanners] would have been able to detect the weapon Mr. Abdulmutallab used."

But there's a deeper question to ask: how far are we willing to go to prevent weapons or bombs from getting on airplanes? In the past decade, terrorists on airplanes have killed just about 3,000 people -- all on one day. Even if the Christmas Day bomber had succeeded, the number would be under 3,500.

Those are horrible deaths. But in that same period, more than 150,000 people have been murdered in the United States. We haven't put the entire U.S. on lockdown -- or even murder capitals like Detroit, New Orleans and Baltimore.

While reducing the murder rate to zero is very desirable, we also understand that the costs, in terms of liberty and resources, are too great. But when it comes to air travel, 9/11 seems to have stripped away our ability to put things in perspective.

Politicians feed into that paranoia with their rhetoric. And lobbyists and government contractors feed on the paranoia.

Update: I failed to mention that Bush’s Homeland Security Secretary flacking for nudie-scanners, too