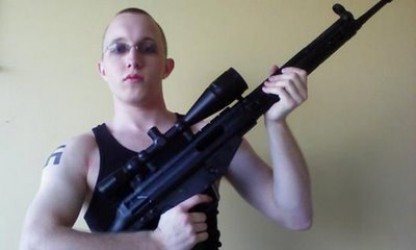 Daniel Cowart: The 20-year-old from Tennessee is being held over an alleged plot to kill Barack Obama and 102 blacks. Photograph: AP

A series of attacks by rightwing extremists has raised fears of a new wave of violence triggered by the economic crisis and the election of the country’s first black president.

Since the inauguration of Barack Obama this year a series of shootings have taken place, with targets ranging from an abortion clinic to a liberal church and police officers. The attacks have often been fuelled by a potent mix of race hate and conspiracy theories.

Last week’s shooting by neo-Nazi James von Brunn of a black security guard at the Holocaust Museum in Washington DC, a few blocks from the White House, was the most recent incident. Now many experts are worried that extremists will eventually take aim at Obama himself.

“There is now a worry that Obama is going to be a target. It is a really serious situation. It is simply because of the colour of his skin,” said Heidi Beirich, director of research at the Southern Poverty Law Centre, which closely monitors hate groups in the United States. In papers left in Von Brunn’s car after last week’s shooting, investigators have already found anti-Obama statements. Von Brunn wrote in a note: “The Holocaust was a lie. Obama was created by Jews.” Von Brunn, who shot dead Stephen Johns before being shot himself, is in hospital and has been charged with murder.

The shooting has sent shock waves through the US, but in fact it is the tip of an iceberg of incidents over the past year involving far-right gunmen or those inspired by conspiracy theories and inflamed by conservative media pundits.

Two weeks ago Kansas-based abortion doctor George Tiller was gunned down in a church by an anti-abortion campaigner. In April, Joshua Cartwright shot dead two policemen in Florida after a domestic disturbance. Police interviews established that he was “severely disturbed” that Obama had been elected. In North Carolina a former marine is facing charges after police investigating an armed robbery found a private journal containing a plan to kill Obama and white supremacist material.

In January, the day after Obama was inaugurated, a white man in Brockton, Massachusetts, went on a gun spree that killed two blacks. He also had links to white supremacist groups. That followed another shooting spree last summer in which an unemployed truck driver in Tennessee shot two people dead at a church. The gunman, Jim Adkisson, left a note saying he was targeting the church because of its liberal and gay-friendly outlook.

But perhaps the most disturbing recent incident involving the far right happened in December 2008, when police investigated the murder of James Cummings in Maine. Searching his house, they discovered literature on how to build a dirty bomb and many ingredients that could have been used to make such a weapon. Cummings, who collected Nazi memorabilia, had amassed four barrels of radioactive material.

Experts believe that the upsurge in rightwing shootings mirrors the 1990s, when militia groups sprang up across the US, often believing anti-government conspiracy theories. The election of Obama and the sheer scale of the economic crisis have now provided a huge boost to a movement that had appeared to decline markedly over the past decade.

“From the moment Obama became a serious candidate, you have seen a serious up-tick in activities and online chatter from these people… there is a push from extremists that ‘we have got to do something’,” said Professor Jim Corcoran, an expert on America’s far right at Simmons College, Boston, and author of two books on the subject.

So serious has the problem become that the Department of Homeland Security (DHS) issued a report warning about the problem in April. Though the report was greeted with howls of protest by conservatives, its central thesis of an upsurge in far-right extremist violence seems to have come true.

“The DHS report was not crying wolf. It was spot on,” said Corcoran. The report said the economic downturn and Obama’s election represented “unique drivers” for rightwing groups. It warned that “rightwing extremism is likely to grow in strength” and added that new technologies, especially the internet, made “it much more difficult for law enforcement to deter, prevent or pre-empt a violent extremist attack”.

Another factor driving the rise in extremist attacks has been statements by some conservative politicians and media commentators, especially on the Fox News Channel and talk radio. Some of Fox News’s most popular talking heads regularly accuse Obama of being a socialist or a communist who is a threat to American democracy.

Bill O’Reilly, who hosts a nightly show on Fox, regularly called the shot abortion doctor Tiller a baby murderer and nicknamed him “Tiller the killer”. Glenn Beck, one of Fox’s most well-known TV presenters, has even aired patently false rumours that Obama is building “concentration camps” for Republican supporters. “If you have any fear that we might be heading toward a totalitarian state, look out. There is something happening in our country and it ain’t good,” he said on one broadcast.

Those comments echo those of Republican congresswoman Michele Bachman, who has said that Obama is planning to set up “re-education” camps for young people where they would be trained in political correctness. Such outrageous sentiments, carried on a mainstream news channel, are potentially dangerous and could incite people to kill, some experts say. “It is dangerous. They are just promoting conspiracy theories in what is supposed to be the mainstream media,” said Beirich.

One popular conspiracy theory is that Obama plans a crackdown on gun laws in America. The subject is a popular one among conservatives, despite the absence of evidence. It has led to widespread ammunition shortages across the country as gun supporters hoard bullets. The problem has become so bad that some police departments have even had to ration their ammunition supplies. It can also have a deadly impact. In April in Pittsburgh Richard Poplawski shot and killed three police officers he believed might be trying to take away his weapons. Poplawski, a white supremacist, had come to believe that Obama was planning a crackdown on gun ownership.