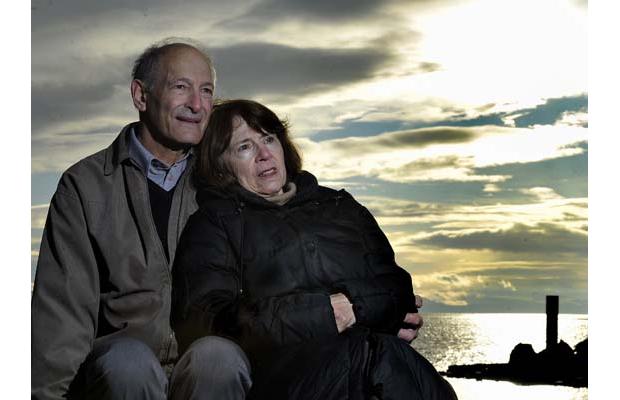 Fifty years ago Richmond homemaker Gina Blasbalg was a victim of physical and psychological torture and unethical experiments. As a teen she was part of a CIA-sponsored program into mind control at the Allan Psychiatric Institute in Montreal. Today, times are happier, but Ralph and Gina Blasbalg still have a favourite bench to sit on at Garry Point Park in Richmond. Gina was an unsuspecting patient in the CIA-sponsored brainwashing program in Montreal, a young Ralph Blasbalg rescued Gina from daily rounds of pills she was being coerced to take. While she was withdrawing from the medication, they had a place they would walk to at night in Montreal. They called it their “crying bench.” Photograph by: Les Bazso, PNG

Gina Blasbalg was brainwashed by the CIA. The Richmond homemaker was a victim of physical and psychological torture and unethical experiments.

The “medical misadventure” took place in Canada more than 50 years ago at the Allan Institute in Montreal.

Although traumatized by the experience, her story is one of triumph, and today her life is about giving back to young people. …

Gina Rossi was a wild kid in postwar Montreal who pounded nails into walls to get attention.

“I must have been a parent’s nightmare,” she says. Her rebellious ways didn’t matter to her kindly father, an Italian-immigrant who bought her ice cream at the park.

Her mother was a different story. Gina says she was “physically and emotionally abusive.”

She was just 10 years old in 1952 when her father died unexpectedly.

“My world crumbled and my life shattered,” she says.

Her mother did not want to have Gina and her sister around anymore.

They were placed in an orphanage.

Gina’s vulnerable life as a ward of the state was setting her up for an even bigger trial.

During the late 1950s and early ‘60s, fears spread that the Chinese had learned to ‘program’ the minds of Western prisoners during the Korean War.

New theories about drugs, electric shock and LSD were showing up and institutions wanted to test them.

Gina’s helpless condition made her a prime victim for the revolutionary experiments being performed in Montreal.

The timing was perfect when Gina, a 16-year-old emotional wreck, arrived at Royal Victoria Hospital with infectious hepatitis.

“Being an orphan played hell with a child’s mind. I couldn’t stop crying,” she says.

When doctors diagnosed depression, they sent her to a gothic 19th century mansion called Ravenscrag, also known as the Allan Memorial Psychiatric Institute.

The Allan Psychiatric Institute has been called a “House of Horrors” for good reason.

The so-called treatment of the teenaged Gina consisted of ingesting twice daily doses of 16 pills, under a nurse’s strict supervision.

The drug types varied widely and often had opposing effects.

In no particular classification, they included uppers and downers, depressants and anti-depressants, tranquillizers, barbiturates and truth serum.

The capsules came in a rainbow of colours: blue and brown, turquoise, yellow and red, azure, salmon, pink and white.

“We had to take our medication. If I didn’t I was told I would be put in the insane asylum,” she says.

The effects left her very weak.

In additon to the pills there was physical and psychological torture.

She says one the worst things done to her was drug-induced contortions which twisted her muscles into unnatural forms.

“It was extremely painful and traumatizing. They wanted to measure the effect of the contortions so they could add it to their research,” she says.

The nitrous oxide given to her, called laughing gas, was anything but funny.

“I felt like I was spinning forever. I didn’t know if I’d ever come out of it. I dreaded it. I remember thinking, is this what it’s like to die?”

She was also given mind-altering LSD.

“I had a dream that I was flying continuously into a massive sticky spider’s web. I was screaming and somebody held me down.”

After long periods of artificially-prolonged sleep, doctors posed questions while she was hypnotized under a truth serum.

“They were able to penetrate my thoughts.,” says Gina.

She was one of hundreds of unsuspecting patients who never gave their informed consent to be used as guinea pigs.

And there was no way to dispute medical orders. “Welfare patients could not sue doctors,” she says.

She feels fortunate not to have received massive doses of electric shocks to the brain which many received at the Allan.

The CIA and Dr. Strangelove

At the top of the Allan’s chain of command was an enigmatic man called Dr. Ewen Cameron.

He was an imposing, Scottish-born figure who was later dubbed “Dr. Strangelove.”

“The chief,” as he was known, had made his mark as a member of a select team which studied Nazi leader Rudolph Hess in Germany after the Second World War.

He was a giant of international medicine who was the first president of the World Psychiatric Association.

Cameron wanted to delve into the inner depths of the human psyche and receive international acclaim — perhaps a Nobel Prize — for his work.

He thought the mind could be deprogrammed through extra-large doses of electric shock, sensory deprivation, drug concoctions and long periods of induced sleep.

Once the mental slate was wiped clean, he believed that minds could be reprogrammed by playing reassuring taped comments through pillows as patients slept.

The messages — things such as ‘You are a good wife and people appreciate you’ — were played over and over each day for hours at a time, and repeated for weeks on end.

“He wasn’t liked by the patients,” says Gina. “They were terrified of him. They tried to run away. I heard people begging for no more treatments.”

During a climate of fear engendered by the Cold War, the CIA gave him money to find out how to control the human mind.

It took two decades for it to be made public that the CIA and the Canadian government secretly contributed more than $500,000 to the now discredited program.

Cameron’s actions have been widely criticized since news of his work surfaced during the 1980s.

A 1986 Department of Justice report concluded that his therapeutic techniques were a “medical misadventure.”

The report’s author said it was an unjustifiable form of assault on the human brain.

He recommended the government award victims $100,000; 77 people have collected.

Montreal lawyer Alan Stein, who has successfully sued on victims’ behalf, says many patients didn’t qualify for the compensation, Gina among them.

Their records were lost (Gina was told her records couldn’t be found) or they didn’t meet the standard of mistreatment that was set.

Victims had to prove that they had been “put in a childlike state.”

Gina was caught in an endless round of failed treatments which made her worse.

After two years of “treatment”, at the age 18, she was temporarily staying at a non-profit home for young women while receiving outpatient treatments at the Allan.

Her treatments continued because the doctors coerced and manipulated her, she says, into believing she needed to stay in the program to regain her physical and mental health.

She was still alone and unprotected.

Enter Ralph Blasbalg, a streetwise kid of 19 who repaired TVs.

The two were alike in many ways. He was given up by his family at an early age and left to fend for himself.

“I related to her. I saw the look that abandoned children have,” he says.

Ralph was at the group residence to repair a TV. It was late. The basement canteen was almost empty — just Gina.

She was trying to follow a murder mystery called Beware My Lovely as Ralph adjusted the set.

It seems hilarious now, but both of them happened to be looking away when the most important scene occurred — a body dropped out of the closet.

When they discovered neither knew what had happened, not much else was said.

It turned out Gina and Ralph had mutual friends. When they met a few days later, Ralph saw a “terribly thin, gaunt and beautiful” woman.

“Her eyes were amazing. She never lost the sparkle. That’s what told me somebody was awake inside,” he says.

“I saw how they wrecked this beautiful girl. She didn’t know what was going on. I call it psychological dissection.”

Gina was now responsible for picking up her own pills at a pharmacy.

“I cannot tell you how angry I was with Cameron,” says Ralph of the doctor in charge at the Allan.

“I was committed to her,” says Ralph.

He secretly weaned Gina off the pills by removing them one at a time over a number of weeks. Some nights Gina and Ralph would walk off the withdrawal symptoms by hiking over Mount Royal to Pratt Park. They huddled at a special bench to keep warm.

“We called it our crying bench,” Ralph says. “We would walk all night. We would sing and embrace each other so she could get rid of the drugs’ effects.”

Finally, the treatments were brought to a close. Gina simply walked away after her last session finished in 1962.

“They always kept threatening that if I didn’t come back, they would send the police after me,” she says.

Ralph retorted: “Over my dead body.”

The pair were free. They married shortly after Gina left the Allan for the last time.

The couple still has a special bench, now at Garry Point Park in Richmond.

More than 50 years on, after raising a family of four, Gina, a diminutive and attractive-looking 70, has survived.

Years of state-sponsored psychological and physical abuse have left their mark, but she has come through.

“It has taken me a long time to trust people,” she says. “I am healthy. I’m thankful I’m still alive. What have I got to complain about?”

Her 2011 book, Disposable Minds, Expendable People, is a personal memoir of the frightening days in the Allan as a helpless teenager.

She wrote the memoir to expunge the bad memories and tell people what happened to her.

Gina has never received any compensation for her abuse.

“I’m not holding anyone accountable. That was then. The times were different.”

Ralph is not so accommodating.

“I don’t have the same forgiving bone as my wife. What she went through was hell.

“I don’t know how people who do these things can sleep at night. The victims were disposable. These people fell through the cracks of the system.

“This was really the chamber of horrors. It’s a sordid part of the country’s past.

What’s remarkable is Gina’s ability to survive it all. The loving care she gives to those around her, including the strangers, the homestay students she invites into her home. Loving care she never received.

“I was afraid when I first arrived from South Korea. I didn’t know them,” says a 15-year-old Lisa.

As she stayed longer, the student says the Blasbalg’s place became home.

This is how her husband explains Gina’s remarkable nature: “She taught me tolerance. She calmed me down. Some people just have this inner strength which pulls them through.

Previous Article
The Recipe Behind the Papa John’s Scandal
Next Article
MSNBC to Air Documentary on the Disappearance of Iowa Paperboy Johnny Gosch on Dec. 16 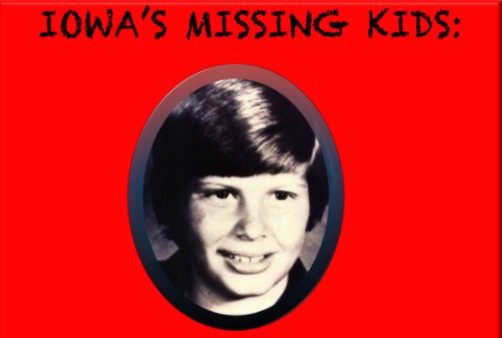 MSNBC to Air Documentary on the Disappearance of Iowa Paperboy Johnny Gosch on Dec. 16
Dec 02