The Oscar-nominated documentary “The Act of Killing” reconstructs the evil mayhem that was the backdrop to Obama’s early life in Jakarta and the erosion of his mother’s second marriage.

Tucked inside the 17,000 word monograph published by New Yorker editor David Remnick this week about Barack Obama, there was this: “He remembers going with his mother to live in Indonesia in 1967 – shortly after a military coup, engineered with American help, led to the slaughter of hundreds of thousands of people. This event, and the fact that so few Americans know much about it, made a lasting impression on Obama.”

Obama was six years old when his mother Ann Dunham took him to Jakarta to join her second husband, Lolo Soetero, whom she had met at the University of Hawaii and whom she married in 1965. Like most other Indonesian students studying abroad, Soetero had been ordered to return home in the purge that followed the failed coup d’etat carried out by the so-called 30 September Movement – also dubbed by its enemies ‘Gestapu’ – in which six Indonesian army generals were killed.

General Suharto’s army pinned the blame on the Indonesian communist party, PKI, in a questionable narrative made famous by the 1982 Peter Weir film “The Year of Living Dangerously.” This was the pretext for a sustained, army-backed, three-year-long killing spree in which over a million Indonesians were liquidated. Shortly before Obama and his mother arrived, Suharto himself deposed Indonesia’s founder and President Sukarno, seizing the reins of absolute power for the ensuing 31 years.

In his autobiographical book Dreams from My Father, Obama writes tenderly and even longingly of the four years he spent with father-figure Lolo: he turned to his him “for guidance and instruction,” for boxing lessons, for introductions to the facts of life as well as to “dog meat (tough), snake meat (tougher) and roasted grasshopper (crunchy).” Lolo’s knowledge of the world, Obama writes, “seemed inexhaustible.”

But relations between Dunham and Lolo deteriorated as Obama’s stepfather retreated into “some dark and hidden place.” Lolo grew despondent because of the government’s total control over his life, because of the all-pervasive corruption, because of the need to kowtow to “ugly Americans” with government ties for his livelihood, because of the explanations that an increasingly distressed Dunham demanded about the persistent reports that the anti-Sukarno coup had been far from bloodless, as she had initially been led to believe, but on the contrary, had entailed a civilian massacre of unthinkable proportions.

The movie “The Act of Killing,” considered by many to be this year’s frontrunner for an Oscar award for best documentary, provides a disturbing account of the wanton carnage that had taken place not far from Obama’s sheltered home, which Indonesian and American guests doubtlessly whispered about when they thought he was out of earshot. Director Joshua Oppenheimer, retreating from his original intention to document the fate of the descendants of the 1965-1968 killings because he feared for their safety, turned his cameras on the perpetrators of the genocide, who willingly and chillingly recounted their crimes and opened a rare window to their warped, amoral and homicidal minds.

Oppenheimer zooms in on Anwar Congo, a local gangster living in North Sumatra, who is said to have murdered over 1000 people with his bare hands. Anwar and his colleagues proudly reconstruct how they extorted enormous amounts of money from Chinese Indonesians, how they killed them on the spot if they refused, how they tortured and then murdered people suspected of being Communists, how they burned down their houses and razed their villages, how they raped their wives and especially their teenage daughters, and how they not only escaped trial or punishment but are considered to be fine upstanding heroes to this day.

Oppenheimer’s modern Indonesia comes across as not much different from the one that enveloped Obama and troubled his stepfather 40 years ago: a primitive place, unrepentant for its crimes, consumed by fear, driven by corruption, controlled by fascist para-military movements that enjoy government support and view Anwar and his killer-gangster colleagues as esteemed founding fathers. Oppenheimer interviews the editor of a local newspaper who doubled as judge, jury and executioner 45 years ago and who proudly proclaims that his “duty as a journalist was to create hate” towards the victims of Suharto’s purge, just as he captures a contemporary television host who interviews Anwar and exhorts her audience to “exterminate Communists,” if any can still be found.

The film does not dwell on the murky role played by the U.S. government and the CIA in directly aiding or abetting the mass murders, though there is no doubt that Lyndon Johnson’s Administration supported Suharto and his bid to eradicate the PKI as they rejoiced over the deposal of the non-aligned and Communist-inclined Sukarno and the removal of a crucial “domino” from the path of the famous Southeast Asian “Domino Theory.” Johnson lauded “a magnificent story of opportunity seen and promise awakened” as Anwar and others of his ilk strangled their victims with thin wires or beheaded them with heavy axes or ran them over with cars or shot them or stabbed them to death, a process heralded by Time Magazine as “Good News from Indonesia” and captioned “Vengeance with a Smile.”

Obama may have been too young to rationally analyze the hell that surrounded him or the mayhem that was slowly eroding the foundations of his family, but there can be no doubt that these events left a lasting, emotional impression on him, conscious or otherwise. As Obama himself makes clear to Remnick, this was a formative event that frames his attitudes to military intervention and, more pertinently, to efforts aimed at achieving ‘regime change’, the catchphrase that achieved prominence with the 2003 removal of Saddam Hussein and remains enticing, nonetheless, for many of Obama’s detractors on the right.

This is a common thread that clusters Obama’s reluctance to support the 2009 Green Revolution in Tehran, his insistence on “leading from behind” in Tripoli, his willingness to cooperate with the Muslim Brotherhood that replaced Mubarak in Egypt and his equivocation concerning Bashar Assad’s murderous regime in Syria: Syrian government forces may be carrying out mass killings on a scale that may one day be seen as rivalling the butchery in Indonesia, but at least Obama can tell himself, right or wrongly, that his hands did not spill this Syrian blood.

Remnick quotes “members of Obama’s team” who believe “that the leaders of Israel, Egypt, Jordan and the Gulf states … want the U.S. to be their proxy in a struggle not merely for de-nuclearization in Iran but for regime change.” Tehran’s rivals are convinced, of course, that nothing could be worse than the ayatollahs, but Obama believes, as he has since he was a child, that behind every ostensible change for the better lurks the specter of absolute evil, for which there is no forgiveness, even after 45 years and even if everyone else seems to have forgotten. 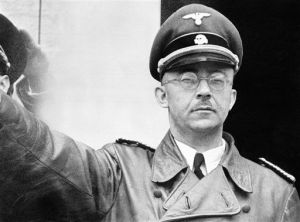