A Justice Department report leaked to The New York Times reveals how the C.I.A. aided Nazis after World War II 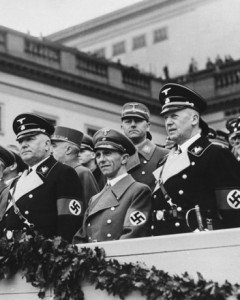 The C.I.A. helped Nazi war criminals in the U.S. by giving them sanctuary and jobs, and covering up their pasts, according to a Justice Department report leaked to Eric Lichtblau of The New York Times. The document was written in 2006, but a full version remained unpublished until this week. The National Security Archives managed to obtain a heavily-redacted version of the report last month, but The New York Times has an uncensored copy. Here are the key revelations:

1. America opened its doors to Nazis

Investigators from a Justice Department division called the Office of Special Investigations (O.S.I.) report that Nazis "were indeed knowingly granted entry" despite the fact that some U.S. officials knew about their associations with Hitler. According to the report, "America, which prided itself on being a safe haven for the persecuted, became — in some small measure — a safe haven for persecutors as well."

2. The C.I.A. employed an architect of the Final Solution

In 1954, the C.I.A. worked with Otto Von Bolschwing, a former SS captain who had helped his associate Adolf Eichmann devise plans to "purge Germany of the Jews." Von Bolschwing was recruited by the C.I.A after the war, and intelligence officials debated what to do if the German was confronted about his past. The Justice Department would later attempt to deport Von Bolschwing in 1981, but he died before being forced to leave the country.

3. A New Jersey man's Nazi involvement was covered up

The Justice Department claimed no C.I.A. or F.B.I. records existed for Tscherim Soobzokov, a former Waffen officer discovered living in New Jersey in 1980. But, the report says, the Department knew that Soobzokov had told the C.I.A. of his SS connection when he arrived in the U.S.

The C.I.A. recruited Nazi scientist Arthur L. Rudolph to work on rocket-building programs in the U.S. without examining his use of Jewish slave laborers at a wartime munitions factory. When it finally learned the facts, Justice Department officials attempted to keep him in the U.S. The one-time NASA engineer was eventually forced to renounce his U.S. citizenship in 1984. ...

Read the entire article at The New York Times.