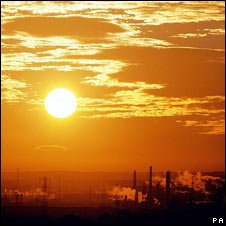 In the Grand Ballroom Of Chicago's Magnificent Mile Hotel, dinner was over.

Beef, of course. A great pink hunk of it from the American Mid-West.

At the world's biggest gathering of climate change sceptics, organised by the right-wing Heartland Institute, vegetarians were an endangered species.

Wine flowed and blood coursed during a rousing address from Heartland's libertarian president Joseph Bast. Climate change is being used by governments to oppress the people, he believes.

After years of opposing government rules on smoking and the environment, Mr Bast now aims to forge a global movement of climate sceptics to end the "myth" that humans are endangering the atmosphere. He urged the audience to spread the word among their families, friends and work colleagues that climate science is too uncertain to guide government policy, and that plans for climate laws in the US would bankrupt the nation.

In turn, he introduced an all-American hero, Harrison Schmitt, one of the last people to walk on the Moon and still going strong. Mr Schmitt trained as a geologist and like some other geologists believes that climate change is part of a natural fluctuation. He's also a former Republican Senator and he made the case that the American constitution contains no powers for government to legislate CO2.

The audience, containing some international faces, but mostly American libertarians and Republicans, loved the small-government message. They cheered when a member of the audience demanded that the "Climategate criminals" - the scientists behind the University of East Anglia (UEA) hacked emails - should be jailed for fraud.

And the fervour reached a peak when the reluctant hero, Steve McIntyre, shambled on to the stage. Mr McIntyre is the retired mining engineer who started enquiring into climate statistics as a hobby and whose requests for raw data from the UEA led to a chain of events which have thrown climate science into turmoil. The crowd rose to applaud him to the stage in recognition of his extraordinary statistical battle to disprove the "Hockey Stick" graph that had become an emblem of man-made global warming.

There was a moment of anticipation as Mr McIntyre stood nervously before the podium - a lugubrious bear of a man resembling a character from Garrison Keillor's Lake Wobegon.

"I'm not used to speaking in front of such big crowds," he mumbled. And he winced a little when one emotional admirer blurted that he had travelled 10,000 miles from South Africa for the thrill of hearing him speak.

But then came a sudden and unexpected anti-climax. Mr McIntyre urged the audience to support the battle for open source data on climate change - but then he counselled them to stop clamouring for the blood of the e-mailers. McIntyre does not want them jailed, or even punished. He just wants them to say they are sorry. The audience disappointment was tangible - like a houndpack denied the kill. Mr McIntyre then advised sceptics to stop insisting that the Hockey Stick is a fraud. It is understandable for scientists to present their data in a graphic way to "sell" their message, he said. He understood why they had done it. But their motives were irrelevant. The standard of evidence required to prove fraud over the Hockey Stick was needlessly high, he said. All that was needed was an acknowledgement by the science authorities that the Hockey Stick was wrong.

This was clearly not the sort of emollient message the sceptics expected from one of their heavy hitters. And the speech slipped further into climate pacifism when Mr McIntyre confessed that he did not share the libertarian tendencies of many in the ballroom.

As a Canadian, he said, he was brought up to believe that governments should govern on behalf of the people - so if CO2 were reckoned to be dangerous, it would be the duty of politicians to make laws to cut emissions. The quiet man said he thought that the work of his climate-statistical website was probably done. He sat down to one-handed applause.

Not so much of a call to arms as a whispered advice to the adversary to lay down his weapons and depart the battlefield.

His message of climate conciliation was reinforced by Tom Harris, founder of the International Climate Science Coalition. He says he's not a right-winger, and he told the conference that many scientists sharing his political views had misgivings about establishment climate theory, but would not speak out for fear of being associated with their political opponents or with the fossil fuel industry.

Indeed some moderate climate sceptics told me they have shunned this conference for fear of being publicly associated with a highly-politicised group. And Sonia Boehmer Christiansen, the British-based climate agnostic (her term), brought to a juddering halt an impassioned anti-government breakfast discussion with a warning to libertarians that they would never win the policy argument on climate unless they could carry people from the Left with them.

Governments needed taxes, she said - and energy taxes - were an efficient way of gathering them.

Even some right-wingers agreed the need to review the language of scam and fraud. Professor Roy Spencer, for instance, is a climate sceptic scientist from the University of Alabama in Huntsville. But when I asked him about the future of Professor Phil Jones, the man of the heart of the UEA e-mail affair, he said he had some sympathy.

"He says he's not very organised. I'm not very organised myself," said Professor Spencer. "If you asked me to find original data from 20 years ago I'd have great difficulty too. We just didn't realise in those days how important and controversial this would all become - now it would just all be stored on computer. Phil Jones has been looking at climate records for a very long time. Frankly our data set agrees with his, so unless we are all making the same mistake we're not likely to find out anything new from the data anyway."

Professor Spencer admits that he is regarded by orthodox climate scientists as a renegade. But as a very conservative Christian he is at home here, and his views carry weight at this meeting.

Like most climate sceptic scientists, he accepts that CO2 is a warming gas - this is basic physics, he says, and very hard to dispute. But he says his studies on incoming and outgoing Earth radiation measured by satellites suggest that changes in cloudiness are mitigating warming caused by CO2. He thinks all the world's climate modellers are wrong to assume that the Earth's natural systems will augment warming from CO2, and he hopes that a forthcoming paper will prove his case. He admits that he has been wrong often enough to know it's easy to be wrong on a subject as complex as the climate. But he says that means the modellers can all be wrong, too.

The key question for the future, he said, was the one that has been asked for the past 30 years with inconclusive answers - how sensitive will the climate be to a doubling of CO2?

The godfather of climate scepticism Richard Lindzen, professor of meteorology at Massachusetts Institute of Technology (MIT), has been pre-occupied with this question for decades. He is a member of the US National Academy of Sciences and a former lead author for the IPCC. But he is immensely controversial and his views run directly counter to those of his institute, which, he says, is looking forward to his retirement.

He has been accused of ignoring recent developments in science.

He believes CO2 is probably keeping the Earth warmer than it would otherwise be, but says he is more convinced than ever that the climate will prove increasingly resilient to extra CO2. He thinks that this greenhouse gas will not increase temperature much more than 1C in total because the positive feedbacks predicted by computer models will not occur.

The final word of this conference - part counter-orthodox science brainstorm, part political rally - was left to a man who is not a scientist at all, Christopher Monckton, former adviser to Mrs Thatcher, now the darling of climate sceptics worldwide.

In a bravura performance he had the audience roaring at his mocking impersonation of "railway engineer Rajendra Pachauri - the Casey Jones of climate change"; hissing with pantomime fury at the "scandal" of Climategate, then emotionally applauding the American troops who have given their lives for the freedom that their political masters are surrendering to the global socialist tyranny of global warming. His closing words were delivered in a weeping whisper, a soft prayer of praise to the American constitution and individual liberty.

As the ecstatic crowd filtered out I pointed one delegate to a copy of the Wall Street Journal on the table. A front page paragraph noted that April had been the warmest on record.