By DONALD GILLILAND
The Patriot-News | September 4, 2010 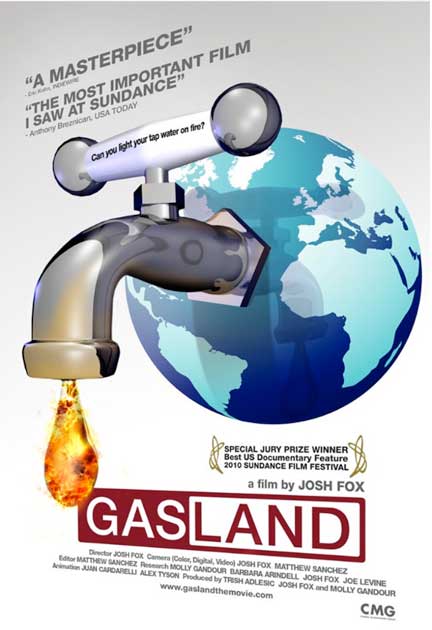 The movie “Gasland” — about the environmental hazards of drilling and fracking shale for natural gas — has become a national sensation.

The documentary has aired repeatedly on HBO in recent months. Critics, including some Pennsylvania government officials, say it’s a shameless piece of propaganda riddled with inaccuracies. Fans say it opened their eyes to what really happens when drillers come to town. Either way, it has become a force to be reckoned with in the ongoing political debate over Marcellus Shale in Pennsylvania.

Director Josh Fox is a native of Wayne County, and much of the film focuses on Pennsylvania problems and policies. In an interview last week, Fox spoke about the film’s impact and local developments since its release.

Q: Your film has been shown on PBS, featured nationally on HBO, and you’ve personally taken it on tour across Pennsylvania for community showings and Q-and-A’s. What changes have you seen — what’s happened — since release of the movie?

A: It has been a galvanizing event. I’ve never seen a movement like this across the country. There are so many people in so many places. … Connectivity has happened. That was a lot. The industry is no longer able to tell people they’re wrong or an isolated case. … We have a New York moratorium on drilling. A copy of the film was distributed to every member of the New York Assembly, and they realized the industry had been lying to them.

Q: Have you heard from anyone in state government? Gov. Ed Rendell?

A: Not directly from Rendell, but from some people in his office who have been investigating this. It’s really insulting what’s happening in Pennsylvania. Pennsylvania is trying to make it easier to drill at the same time that New York is passing a moratorium. (Pennsylvania Department of Environmental Protection Secretary) John Hanger just announced he wants to provide a permanent drinking water supply to Dimock. Is he going to provide that in Washington and Greene counties? I tell you right now all the areas that are being drilled are going to need it.

Q: Secretary Hanger has some very unflattering moments in the film and has since called you a propagandist and called the film fundamentally dishonest. Have you spoken with him since its release and what’s your reaction to his criticism?

A: In the film, he said to me — in a very disingenuous moment — “If something’s going on with your stream, call me,” and he handed me his card. I have an exploratory gas well going in within a couple (of) hundred feet of my stream. I have called and called and have got no response. John Hanger is leading the Department of Everything Permitted. His legacy will be as an apologist for an industry that’s polluting Pennsylvania left and right wherever they go. … It’s an embarrassment. I don’t tell people what to think in the film. I wanted the ranchers in Wyoming to talk to the common people in Pennsylvania. I wanted that conversation to happen. … Not a conversation going from the gas industry to government to Penn State. I think the film is an honest assessment of what’s happening across America. If that comes across as negative, that’s because it is negative.

Q: The film features a rancher out west who thinks his well water has been contaminated by fracking fluids. Have tests been done since? What was the result?

A: They’ve got glycol in their backyard. Triethylene glycol. That’s confirmed by the science. It’s not propaganda.

Q: The film focuses on the secrecy surrounding the chemicals used in fracking. Range Resources and several other companies have since begun publicly posting the fracking recipe for each of their wells in Pennsylvania. Your thoughts on that?

A: They’re clearly afraid of federal regulation. They’re trying to get out ahead of the curve. The governor of Wyoming publicly stated (his state) passed this (fracking disclosure) law to keep the EPA out. That Wyoming law requires the industry to disclose the chemicals to the state, but not the people. There has to be a federal standard in America. … Right now, the gas industry is exempt from the Clean Water Act, the Safe Drinking Water Act, the Clean Air Act. … We shouldn’t be having any discussion of drilling until those exemptions are reversed.

Q: One of the most arresting images from “Gasland” is people lighting their tap water on fire. That really sticks with people, but in my experience viewers equate that with contamination by fracking fluids, and I have criticized your movie for not making a clear distinction between the two. Do you think that’s a fair criticism?

A: We show in Dimock methane is in the water. (Out west) they also have a lot of other crap in their water. I don’t think it’s a fair criticism because it’s just viewers commingling the two things. It may create confusion, but it is the case you have a lot of different forms of contamination.

Q: I’ve written that your film is definitely worth watching, but my other criticism is that it never touches on the voracious American appetite for energy that drives gas exploration and never invites viewers to assume any responsibility — or collusion perhaps — for what’s being done. Do you think we are all to some extent culpable or not?

A: We have a surplus of natural gas in this country right now, and a lot of what’s being drilled is going for export. The only reason we’re not holding industry responsible is for those industries’ profit margins. It has nothing to do with providing energy for America. That’s propaganda. Certainly we need to move toward sustainability — that’s one of the messages of the film. But we should not be risking our health for gas exports or profits for gas companies.

Q: Do you believe that responsible exploitation of this resource is possible? Do you think there is a middle ground that can be found between the environmental folks and the gas drilling companies. … Do you see it as a black/white issue, or is there some gray?

A: This is a disaster across America. Everywhere this industry goes, you see the same problems. We need a five-year moratorium. We need the EPA regulating. We need fracking fluids tagged with nonradioactive isotopes so if they show up in someone’s water, we can tell where it came from. After the Oklahoma City bombing, they tagged all explosive materials so they could tell where they were purchased. There are all sorts of things that could possibly make it safe. Between 1,400 and 1,800 Marcellus wells have been drilled in Pennsylvania, and there have been 1,435 violations. That’s a disastrous track record. This whole thing is a disaster. Where you have drilling you have intense suffering. If they could leave, they would, in Dimock. In most cases, the property value is reduced to zero because you’re living on a property that’s toxic.

Q: Pennsylvania is considering a forced pooling law, which if passed could mean drilling companies could take the gas from under your property without your permission if three-quarters of the property around you has already been leased. What do you think of that?

A: I think that’s wrong. It goes against the most fundamental principle of property ownership in America. (If a forced pooling law passes) people should know even in that case they should not sign a lease because … if they don’t sign they can sue, and they should sue when — not if — when it contaminates their properties. … You can’t have industrial zoning in a residential area, so why are we allowing industrial processes to come in to residential areas?

Q: Pennsylvania seems to be playing catch-up to a lot of other states when it comes to regulations, taxes and development of the shale. Based on your experience, do you think there is any state that Pennsylvania could, or should, look to as a model?

A: Yeah, New York. That’s the only sane policy I’ve heard so far. While New York has looked at Pennsylvania and said we’re not doing this because we can see it’s an absolute disaster, Pennsylvania is moving in the opposite direction, making it easier to pollute with impunity and to force people into doing business with this industry anyway. Every other state you see these problems. New York is the only state treating it with a proper sense of due diligence. There was no due diligence in Pennsylvania. They can’t tell you what’s in the fracking waste being dumped into tributaries of the Monongahela. Does that make any sense to you? It only makes sense if you’re a gas company that wants to dispose of toxic waste for free … into people’s drinking water supply. I can tell you for sure fracking water is in the drinking water in Pittsburgh. They’re dumping it into tributaries of the Monongahela, and that’s where Pittsburgh gets its water.

Nazi Movements in America, their Hateful Ideas & Influence on the Conservative Right
Sep 05