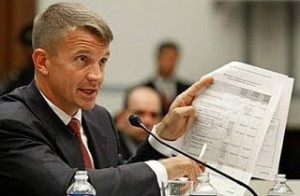 Washington, August 9, 2009, (Pal Telegraph) - Two former employees of Blackwater Worldwide, the embattled security firm hired by the US government to protect American diplomats in Iraq, have given sworn testimony in a Virginia court accusing the company's founder, Erik Prince, of murdering potential whistle-blowers and engaging in a host of other serious crimes.

The company, which now operates under the name Xe, has denied the allegations.

In a sworn affidavit, a former employee identified as "John Doe No 1", alleged that his Blackwater colleagues who provided sensitive information about the company, or who planned to do so, "have been killed in suspicious circumstances".

A second employee, identified as "John Doe No 2", alleged that Mr Prince "murdered, or had murdered, one or more persons who have provided information, or who were planning to provide information, to the federal authorities about the ongoing criminal conduct".

No specifics about those crimes are provided in the affidavits and no charges have been filed against Mr Prince.

The company asserted in a statement to several media outlets that Mr Prince and the company have done nothing wrong.

The statement said the company would respond to the "anonymous unsubstantiated and offensive assertions put forward by the plaintiffs" in court at a briefing later this month.

The former employees' affidavits were filed on Monday in the US district court in Virginia in opposition to Blackwater's motion to dismiss several civil cases filed against it. The cases were brought on behalf of Iraqi families who say their relatives were killed by Blackwater guards.

Blackwater, based in North Carolina, is already involved in several criminal cases stemming from the September 2007 shootings in a Baghdad public square that left 17 Iraqis dead, most of them civilians. US federal prosecutors have charged five guards involved in the incident with manslaughter. A sixth guard, who admitted in a plea deal to killing at least one Iraqi, has been indicted.

That incident and other allegations of excessive force contributed to a decision by the Iraqi government not to renew Blackwater's operating licence in Iraq, which expired in May.

In the affidavits, the former employees painted a disturbing picture of Mr Prince as a religious zealot who views himself as a "Christian crusader tasked with eliminating Muslims and the Islamic faith from the globe".

They also alleged that he committed other egregious crimes, ranging from smuggling banned weapons into Iraq and selling them on the black market to transferring the company's money to his personal bank accounts.

It is unclear what compelled the former employees to testify, but both said they feared retaliation. John Doe No 2 alleged that Mr Prince and others threatened him with "death and violence".

John Doe No 1 said he unloaded "bags of dog food" that were used by Blackwater to smuggle unauthorised weapons into Iraq.

Among the weapons listed in the affidavits is a sawed-off semi-automatic machine gun with a silencer and an M-249 Squad Automatic Weapon.

In one such incident in the city of Baquba, in Diyala province, he said, a guard opened fire on two civilians in a small black car.

"Despite the fact that the car was not heading directly towards us, a Blackwater employee ... motioned to the driver, and almost immediately began firing directly into the car," he said in the affidavit, adding that the shots were "clearly injuring and likely killing the passenger" and "likely injuring" the driver. The guards did not stop their convoy and the incident was not reported, according to John Doe No 1.

The affidavits also allege that Mr Prince knowingly deployed guards who were mentally unfit or had drug abuse problems and hid such information from the US government.

Mr Prince also allegedly "intentionally deployed to Iraq certain men who shared his vision of Christian supremacy, knowing and wanting these men to take every available opportunity to murder Iraqis", according to the testimony.

"Many of these men used call signs based on the Knights of the Templar, the warriors who fought the Crusades".

Other allegations relate to Mr Prince's business practices, including that he attempted to hide wrongdoing by forming several smaller companies.

In 2007, Blackwater's conduct was investigated by the House committee on oversight and government reform.

The members of the committee, a majority of whom were Democrats, produced a report stating that Blackwater's use of force in Iraq was "frequent and extensive, resulting in significant casualties and property damage".

The report also found that when Blackwater guards fired shots, in most cases they fired first, from moving vehicles, without stopping to see if the shots resulted in injuries or deaths.

There is no word on whether the current chairman, Edolphus Towns, a Democrat from New York, plans any further investigation.

Many Blackwater veterans are reportedly working for Virginia-based Triple Canopy, the private security company hired by the state department as Blackwater's replacement.