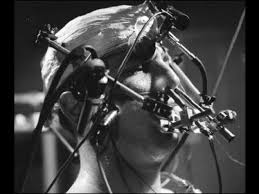 A new article at Truthout I co-wrote with author and investigative journalist H.P. Albarelli describes how the CIA’s Artichoke Project* was the contemporaneous and operational side of the MK-ULTRA mind control research program. It was not superceded by MK-ULTRA in the 1950s, as often supposed.

Even more, Artichoke-derived methods of using drugs, hypnosis, sensory deprivation and overload, behavioral modification techniques and other methods of mind control have resurfaced as a primary component of U.S. interrogation practice.

The Truthout article includes some amazing revelations, including the largest description to date of the roles of then-Ford administration officials Dick Cheney and Donald Rumsfeld in working hand-in-glove with the CIA to suppress information on Artichoke from surfacing.

The article also references the November 2006 release of an “Instruction” from the Secretary of the Navy (3900.39D) regarding its “Human Research Protection Program.” While this memo specifically prohibits the use of research upon prisoners, including so-called “unlawful enemy combatants,” waivers of informed consent for research, or suspension of the protections enumerated in the memo can be made by the Secretary of the Navy under conditions of “operational contingency or during times of national emergency.” It is likely the latter rests upon the legislative language within the September 18, 2001 Authorization to Use Military Force, where terrorist acts are said to “continue to pose an unusual and extraordinary threat to the national security and foreign policy of the United States.”

The waivers allowed for normal human research testing gains further piquancy when one considers the kinds of research referenced in the Secretary of the Navy’s memo. Section 7(a)(2)(a) describes the Undersecretary of the Navy as the “approval authority” for research done upon prisoners, as well as “Severe or unusual intrusions, either physical or psychological, on human subjects (such as consciousness-altering drugs or mind-control techniques)” [emphasis added].

This referencing of “mind-control techniques” in a document specifically discussing human subjects protections by then Secretary of the Navy, Donald C. Winter, is not an anomaly, but a rare instance in which the actual activities of the government in this area are openly revealed. Some of these activities can be documented via publicly available materials. This article describes how some of the individuals involved in U.S. government mind control and torture activities can be tracked and identified.

APA, CIA: “How might we overload the system or overwhelm the senses…?”

Another instance in which the curtain was pulled back on mind control research by the U.S. government involved the online description by the American Psychological Association (APA) of a CIA and Rand Corporation workshop which it co-sponsored in July 2003 at Rand’s Arlington, Virginia headquarters. The event was attended by approximately 40 research psychologists, psychiatrists, neurologists, as well as “representatives from the CIA, FBI and Department of Defense with interests in intelligence operations.”

One of these workshops, ostensibly on detection of deception, specifically described how participants should consider “sensory overloads on the maintenance of deceptive behaviors,” including the use of “pharmacological agents. “How might we,” the workshop asked, “overload the system or overwhelm the senses and see how it affects deceptive behaviors?”

The man in charge of “recruiting the operational expertise” for the workshop was Kirk Hubbard, Chief of the Research & Analysis Branch, Operational Assessment Division of the CIA. It appears likely that Hubbard was responsible for the presence at the workshop of SERE psychologists James Mitchell and Bruce Jessen, who were instrumental in the construction of the Bush administration’s “enhanced interrogation” torture program. Hubbard was also reported (by Scott Shane of the New York Times) to have brought James Mitchell to an informal meeting “of professors and law enforcement and intelligence officers … to brainstorm about Muslim extremism” at the home of former APA president Martin Seligman in November 2001.

Sometime in the past six months, the APA eliminated all references to the webpage described above, even going so far as to eliminate linked references to it on other webpages on its site. While the webpage that described the workshops has been scrubbed, mirrored images of the site remain available at well-known web archive sites, as I described in a recent article on this attempt to rewrite or hide APA’s offensive history. In one sense, this attempt to hide its history is not surprising, because the kind of activities discussed in these workshops are exactly like those that involved CIA and military mind control torture programs going back fifty years or more, and evidently still operational today.

In a recent article, Scott Horton at Harper’s picked up on the unique link between the APA/CIA workshop and the recent revelations about torture at a hitherto unknown black site prison at Bagram Air Base in Afghanistan. That link was an individual, Susan Brandon.

Referenced by Horton as working for the Defense Intelligence Agency’s (DIA), Defense Counterintelligence and Human Intelligence Center (DCHC), a recent publication identified Brandon more fully as Chief for Research in the DCHC’s Behavioral Science Program. As Horton notes, a recent column by Marc Ambinder at The Atlantic described the DCHC as providing “intelligence operatives and interrogators….. [performing] interrogations for a sub-unit of Task Force 714, an elite counter-terrorism brigade.” Interrogations at the Afghan black site reportedly have included use of sleep deprivation, sensory deprivation, brutality, isolation, relying on the guidelines of the Army Field Manual, including its Appendix M. Many human rights groups have criticized Appendix M as including techniques tantamount to torture and/or cruel, inhumane and degrading and illegal by domestic and international law.

Back in 2003, according to an APA news article, Brandon “jointly conceived” the APA/CIA workshops with Rand Associate Policy Analyst, Scott Gerwehr. (Mr. Gerwehr reportedly died a few years ago.) At the time, psychologist Susan Brandon was the Program Officer for Affect and Biobehavioral Regulation at the National Institute of Mental Health, and worked on the APA/CIA program while also serving as “Senior Scientist” at the APA.

In the early 2000s, Dr. Brandon served as Behavioral and Social Science Principal at the Mitre Corporation, a company highly linked to U.S. Air Defense. Subsequent to her stint as APA’s Senior Scientist, she went on to work in for the Bush administration as Assistant Director of Social, Behavioral, and Educational Sciences for the White House Office of Science & Technology Policy. In addition, she became an instrumental member of the Social, Behavioral and Economic Sciences (SBES) Subcommittee of the National Science and Technology Council’s Committees on Science and Homeland and National Security.

Subsequently, as described in an important article by Stephen Soldz that extends many of the points in this essay, Brandon joined the Defense Department’s Counterintelligence Field Activity group (CIFA), which was later disbanded and reformed as part of the DCHC. Soldz also reminds us that Brandon was “one of the silent observers at the [APA] PENS [Psychological Ethics and National Security] taskforce described by dissident taskforce member Jean Maria Arrigo as exerting pressure on members to adopt a likely pre-approved policy in favor of participation in Guantánamo, CIA, and other interrogations. According to a 2005 article by Geoff Mumford, APA’s Director of Science Policy, Dr. Branford “helped steer much of the association’s scientific outreach relevant to counter-terrorism after 9/11.”

One example of such outreach would include the June 11, 2002 meeting between Branford, and other top APA officials with “two senior staff members in the National Security Council’s (NSC’s) Office of Combating Terrorism” (OCT). Since Vice Admiral William McRaven was head of OCT at that time, perhaps Brandon’s acquaintance with the world of Special Operations dates to that time, as McRaven was to become Commander of Joint Special Operations Command (JSOC).

JSOC is the other Defense Department component, besides DIA, that has been linked currently with the management of the black site prisons run by the Obama administration, subsequent to President Obama’s apparent closure of the CIA black sites. One reputable source has informed me that there are eight such black site prisons in Afghanistan alone. A recent report by the BBC corroborated earlier reports by the New York Times and the Washington Post. The article by Ambinder further elaborated upon this story.

Why is the Obama Administration Still Involved in Torture?

It is not known if Dr. Brandon has been involved in any of the reported abuses of prisoners coming out of Bagram’s Tor prison, or elsewhere. Yet one would think the Obama administration and the Pentagon has a lot to explain in utilizing as their behavioral chief of research for an agency involved in intelligence operations, including interrogation. But then, why is the Obama administration involved in torture or operating secret prisons at all? President Obama has manifestly broken his promise to the American people to end torture and close all secret prisons. Nor has Congress done their due diligence in investigating these matters. Only when the American people fully understand the extent to which these activities have occupied the government and their various collaborators, like the APA, will society be able to take the necessary steps to end these abuses, and hold those accountable for what amount to crimes against humanity.

As for psychologists, Dr. Soldz rightly notes, “Psychology as a profession is at a crossroads.” The same holds true for other professions involved with this abusive and criminal history, including the activities of anthropologists in the military’s Human Terrain System teams in Afghanistan, researchers in numerous academic departments across the country, and the many reports of doctors and other medical personnel involved in the monitoring of torture activities for the CIA and Defense Department. The use of torture has suborned U.S. civil society as a whole in activities that are dark and evil, and the society as a whole must make a tremendous effort if it is to extirpate such evil from its midst.

*For an early document referring to Artichoke’s history, see CIA, Memorandum for the Record, Subject: Project ARTICHOKE, January 31, 1975. While this MOR downplays Artichoke’s history, it represents the degree to which the CIA was willing to reveal such operations. The Truthout article discusses Operation Dormouse, where then Ford administration officials Dick Cheney and Donald Rumsfeld worked with the CIA to limit revelations about Artichoke and other CIA torture and assassination operations.

Jeffrey Kaye is a psychologist living in Northern California who writes regularly on torture and other subjects for The Public Record, Truthout and Firedoglake. He also maintains a personal blog, Invictus. His email address is sfpsych at gmail dot com