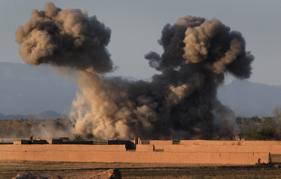 President Obama’s drone attacks on Middle Eastern nations are not just lawless war crimes. As the “murderous drone campaign is both widespread and systematic it thus qualifies as a crime against humanity that verges on genocide,” the distinguished international legal authority Francis Boyle of the University of Illinois, Champaign, says.

In an exclusive interview, Boyle points out that “Obama’s victims are Muslims” and Article II of the 1948 Genocide Convention expressly defines genocide as “any of the following acts committed with intent to destroy, in whole or in part, a national, ethnical, racial or religious group, as such: (a) Killing members of the group…”
Boyle added that as the U.S. “is a contracting party to the Genocide Convention” this would make CIA Director John Brennan as guilty of genocide as Obama. Boyle added, “They are just terrorizing everyone into submission and they know it. Like the Nazis bombing London.” As the Pentagon also has actively launched drones, presumably it shares culpability for genocide.
The CIA’s Brennan told a group of academicians, “We only authorize a strike if we have a high degree of confidence that innocent civilians will not be injured or killed, except in the rarest of circumstances,” Charlie Savage of The New York Times reported.
Brennan acknowledged “instances when — despite the extraordinary precautions we take — civilians have been accidentally injured, or worse, killed in these strikes. It is exceedingly rare, but it has happened. When it does, it pains us and we regret it deeply, as we do any time innocents are killed in war.”
Exceedingly rare? The non-profit Bureau of Investigative Journalism, of London, reports the total killed by Obama’s drone strikes is at least 2,537; that the minimum number of civilians killed is at least 416 and may be closer to 1,000, and that at least 168 children have been killed. What’s more, the number of injured in the attacks is at least 1,128 and may be as high as 1,557, the BIJ says. Others say the BIJ figures are understated.
In a speech to the Easley, S.C., Rotary Club last year, Sen. Lindsey Graham (R-S.C.) said the number of people killed by drones had climbed to 4,700.
Example: According to Craig Whitlock of The Washington Post, Amnesty International reported a July 6, 2012, drone attack in the village of Zowi Sidgi, near the city of Miran Shah, in which it said 18 civilians — including a 14-year-old boy — were killed.
In that case, The Post reported, a group of male laborers had gathered in a tent for dinner when a missile blast killed 10 of them. A few minutes later, as rescuers arrived at the scene to treat the wounded, another round of missiles killed eight more people, according to Amnesty. (Note: there have been numerous reports of drone attacks on first responders and even on funerals.)
The Miran Shah airstrike took place on September 12, 2008, in North Waziristan in the Federally Administered Tribal Areas (FATA) in Pakistan, Wikipedia reports. It was part of a series of attacks targeting presumed militants, and was carried out by a United States Air Force drone aircraft. The missiles hit two buildings – in one three women and two children were killed, and in the other seven Taliban militants died.
While the CIA boss tries to make it appear the strikes are surgical in nature, the fact is that populations living under the drone flights are terrorized en masse so that many civilians are afraid to go to work, open their businesses for the day, and send their children to school. “(The CIA knows) exactly what they are doing and they just don’t care,” Boyle says, adding, “Ditto for Obama.”
(Sherwood Ross is a Miami-based public relations consultant for good causes who has received awards for his reporting and poetry. To contact him or contribute to his anti-war news operation email him at sherwoodross10@gmail.com  Boyle is the distinguished author of numerous books challenging U.S. “defense” policy, notably nuclear issues and preemptive wars. Among his books is “Protesting Power: War, Resistance, and Law,” published by Rowman & Littlefield.)
Previous Article
2004 DNA Test Confirms That Ward Churchill Has No Indian Ancestry
Next Article
The CIA and the Iowa Writers’ Workshop

The CIA and the Iowa Writers’ Workshop
Feb 10