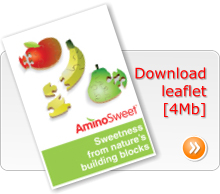 Ajinomoto, “maker of food seasonings, cooking oils and foods, drinks, and pharmaceuticals” (including MSG), has decided to re-brand its controversial artificial sweetener, Aspartame, into AminoSweet. While it will be the exact same product with a different name and packaging, marketing will undoubtedly try to convince you that you’re dealing with a unique new zero-calorie sweetener. Don’t be fooled.

Aspartame-turned-AminoSweet (also known as NutraSweet, Equal and Candarel) is found in most diet soft drinks as well as table sweeteners, breath mints, gum, jams and jellies, cereal and other sugar-free or reduced-sugar products, and is advertised as an easy way to cut calories and lose weight. Unfortunately, Aspartame contains a deadly poison called methanol, which is known to cause headaches, dizziness, nausea, memory loss, eye damage and sometimes even blindness in humans. When methanol is digested by the body, it is broken down into formaldehyde, another poison, which causes cancer and birth defects. Scientists who have studied the effects of Aspartame on diabetics have shown that the use of Aspartame, rather than helping them manage their diabetes by lowering their sugar intake, actually makes their symptoms worse over time. There is also evidence that the chemicals in Aspartame can alter the way the brain works, resulting in mood disorders such as depression.

In fact, there are over 10,000 official complaints, but by the FDA’s own admission, less than 1 percent of those who experience a reaction to a product ever report it. So in all likelihood, the toxic effects of aspartame may have affected roughly a million people already.

While a variety of symptoms have been reported, almost two-thirds of them fall into the neurological and behavioral category consisting mostly of headaches, mood alterations, and hallucinations. The remaining third is mostly gastrointestinal symptoms. –Mercola.com

If you are consuming Aspartame regularly under any of its names, please take the time to read up on its health risks. The marketing tells us that it’s just “made of amino acids—the building blocks of protein that are abundant in our diet”—but the truth is that our bodies can’t handle these artificially isolated amino acids in the quantities found in diet drinks. If you must use a sweetener other than sugar, try a natural alternative such as Stevia.