Sanders is Right: Hillary Clinton’s Praise for Kissinger is Disgusting

The most heated moment in last night’s Democratic debate wasn’t over Wall Street or racial justice. Instead, it was over Henry Kissinger, a former US secretary of state who hasn’t held political office since 1977 and whom Hillary Clinton had previously cited as a foreign policy expert who approved of her work.

“She talked about getting the approval or the support or the mentoring of Henry Kissinger,” Bernie Sanders said. “Now, I find it kind of amazing, because I happen to believe that Henry Kissinger was one of the most destructive secretaries of state in the modern history of this country.”

Sanders has a point. While Kissinger deserves real credit for some of America’s most important Cold War victories, including Nixon’s diplomatic opening to China, he is also responsible for some of its worst atrocities. The carpet-bombing of Cambodia, supporting Pakistan’s genocide in Bangladesh, greenlighting the Argentinian dictatorship’s murderous crackdown on dissidents — all of those were Kissinger initiatives, all pushed in the name of pursuing American national interests and fighting communism.

Christopher Hitchens, in his 2001 book The Trial of Henry Kissinger, called for the man to be indicted by an international court on war crimes charges. He is far from alone.

Clinton and Sanders’s fight over Henry Kissinger wasn’t merely academic history: It speaks to some profound differences in their candidacies, which itself helps explain a major source of Sanders’s appeal.

Kissinger, who served as national security adviser to Richard Nixon as well as secretary of state under Gerald Ford, is, for better or worse, the most important foreign policy official in modern American history. Foreign policy under two American presidents directly reflected his vision of the world.

Before entering public service in 1968, Kissinger was a professor of international relations at Harvard. He developed a very clear worldview centered on the idea of realpolitik: that the United States should carefully pursue its own interests within the confines of what’s politically possible. Moral and ideological considerations, for Kissinger, were less important than cold, hard evaluations of what could advance America’s strategic position.

This led him to take a more pragmatic view of traditional American enemies, like the Soviet Union and China, then had many prior American leaders — ideas that caught Richard Nixon’s ear. Nixon appointed him national security adviser after his 1968 election, and Kissinger quickly became the key influence on Nixon’s foreign policy.

For these accomplishments, Kissinger became one of the most revered foreign policy makers in Washington, widely seen as a strategic genius responsible for reshaping the direction of the Cold War.

“Kissinger seizes the imagination,” biographer Robert Schulzingerwrites, “because he engineered the most significant turning point in United States foreign policy since the beginning of the cold war.”

Here is the problem with this account of Kissinger: It ignores the fact that he shares responsibility for the deaths of enormous numbers of innocent people. For those who believe American policy should be about more than the naked pursuit of self-interest, the continuing veneration of Kissinger in Washington is appalling.

Most infamously, Kissinger masterminded a Nixon-era plan to carpet-bomb Cambodia. Nominally, the bombing — which indiscriminately hit targets in civilian-populated areas — was supposed to destroy North Vietnamese and Viet Cong bases. In reality, it was designed to improve America’s strategic position before a negotiated withdrawal.

American bombs killed between 150,000 and 500,000 people in Cambodia. That created a swell of public support for Pol Pot and his communist Khmer Rouge rebels, who exploited popular anger at the bombings to seize control of the government in 1975. The Khmer Rouge then slaughtered hundreds of thousands of Cambodians and starved even more, ultimately killing at least a million people, about one-seventh of the country’s population.

In 1971, Pakistani dictator Agha Muhammad Yahya Khan began slaughtering the residents of East Pakistan (what’s now Bangladesh) in retaliation for electing a leader who demanded autonomy. Instead of intervening to stop Yahya, Kissinger sent him weapons — a policy that was, at the time, illegal under US law.

He pulled the US consul general in Dhaka, Archer Blood, from his post for questioning the policy, and blocked efforts to pressure Pakistan (a US ally) to end its slaughter. The killing only stopped after India intervened to stop it; estimates of the death toll range between 300,000 and 3 million.

“Kissinger joked about the massacre of Bengali Hindus, and, his voice dripping with contempt, sneered at Americans who ‘bleed’ for ‘the dying Bengalis,” Princeton professor Gary Bass writes in a Politico Magazine piece. Bass suggests that Kissinger’s policy was meant to maintain the alliance with Pakistan, which was an anti-communist bulwark in the region.

We’re still learning about the full extent of Kissinger’s responsibility for violence around the world.

In 2014, newly declassified documents suggested that in the 1970s, Kissinger signaled to Argentina’s right-wing military leaders that the US would not object to its plans to launch a 1976 crackdown on dissent that became known as the Dirty War — and that killed about 30,000 people.

The documents released in 2014 include an account, from then-US Ambassador to Argentina Robert Hill, of Kissinger’s conversation with Argentinian Foreign Minister César Augusto Guzzetti. Guzzetti, it seems, was afraid the crackdown would bring down pressure from the US on human rights — but Kissinger told him that no such pressure would come:

The Argentines were very worried that Kissinger would lecture to them on human rights. Guzzetti and Kissinger had a very long breakfast but the Secretary did not raise the subject. Finally Guzzetti did. Kissinger asked how long will it take you (the Argentines) to clean up the problem. Guzzetti replied that it would be done by the end of the year. Kissinger approved.

In other words, Ambassador Hill explained, Kissinger gave the Argentines the green light.

This is not an exhaustive list of Kissinger’s crimes: It doesn’t touch, among other things, his support for proxy wars in sub-Saharan Africa or his backing of the Indonesian dictator Suharto’s killings in East Timor.

“A back-of-the-envelope count would attribute three, maybe four million deaths to Kissinger’s actions, but that number probably undercounts his victims,” Greg Grandin, a professor of history at New York University, writes at the Nation.

It’s debatable how best to quantify the impact of Kissinger’s actions, and difficult to determine how much of the blame to apportion to him versus other US officials and especially compared with the foreign leaders, whether in Argentina or Pakistan or elsewhere, who ultimately carried out many of these atrocities. Nonetheless, under any accounting, it is a horrifying résumé.

The fact that Hillary Clinton and Bernie Sanders are fighting over Kissinger’s legacy is revealing for both candidates. Her support for Kissinger shows just how much a part of the Washington establishment she really is, while Sanders’s condemnation of the man helps explain his appeal to a lot of liberal voters.

When Clinton first bragged that Kissinger had praised her, she likely didn’t see anything wrong with it. She has been in contact with Kissinger for years — as Grandin notes, they exchanged emails semi-regularly during her own time in Foggy Bottom.

“At 91 years old, the former secretary of state, national security adviser and intellectual-cum-celebrity has come to occupy a unique place in the foreign policy firmament,” Politico‘s Michael Crowley writes. “He has become a Yoda-like figure, bestowing credibility and a statesman’s aura to politicians of both parties, including ones who may not actually share his worldview.”

Kissinger’s crimes have become an afterthought in Washington — even to Clinton, who bills herself as a champion of human rights abroad.

Clinton’s decision to embrace Kissinger, like her highly paid speeches to Goldman Sachs, make her look like someone who’s too ensconced in the American elite to be truly committed to progressive values. It’s everything that many progressives dislike about her.

Which is why it’s such a successful line of attack for Sanders. He, unlike Clinton, isn’t really part of polite Washington society. His career in Congress hasn’t really required him to buddy up with people like Kissinger. He can give voice to progressive concerns about Kissinger and thus about the establishment.

The Kissinger debate, then, isn’t just an argument over a 91-year-old diplomat’s life and legacy. It’s a debate over whether Hillary Clinton is too compromised by her connections to America’s elite to be an effective liberal champion. This is one of Sanders’s key attack lines on Clinton, but one that he has struggled to connect to her foreign policy positions.

Until Clinton gave him an opening. 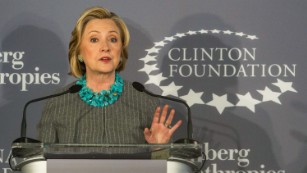