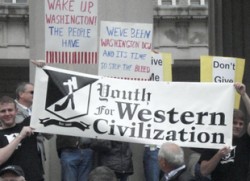 The Towson University chapter of the conservative student group Youth for Western Civilization (YWC) has lost its campus privileges after some of its members chalked “White Pride” at several locations on the school’s Baltimore campus two weeks ago. The school rescinded the group’s official recognition this week after its faculty adviser, Richard Vatz, a communications professor and conservative blogger, said he no longer wanted to be affiliated with the group. He wrote in a letter to the group:

I’m sorry, but that is not how impressive and serious conservatives argue their case. I realize that I have been your adviser only nominally, but I cannot in good conscience advise a group that attacks people or groups personally or tactlessly or does not recognize their dignity and the value of dignified argument in the marketplace of ideas. …

Chapter president Matthew Heimbach defended the graffiti, saying, “White pride is no different than gay pride or black pride.”  The school’s Black Student Union and others complained, leading to a public meeting on racism attended by 400 students. The group has been extremely controversial since it started, when dozens of students spoke out against granting YWC official status.

YWC is a self-described “right wing youth movement” aimed at fighting “radical multiculturism,” socialism, and immigration, both illegal and legal. While the group is not outwardly white nationalist, its members “frequently participated in racist circles and promoted racist beliefs,” according to the Southern Poverty Law center, which tracks radical groups:

The group has allowed a notorious white supremacist organization to raise funds for it; one of its top officials was arrested in a violent racist attack; and its officials have invited racist extremists to speak and in turn addressed hate groups themselves. At least one YWC member has met with and spoken to right-wing extremist groups overseas.

Heimbach himself is a member of the neo-confederate League of the South and has said the two groups planned to work together because they share “similar principles to us and similar goals.”

But despite the group’s radicalism, it is often allowed into the mainstream conservative fold. It was a  co-sponsor of the 2009 College Republican National Convention, where it “received a great response,” and has also co-sponsored the CPAC, the annual conservative gathering in Washington. The group counts former Congressman Tom Tancredo as its “honorary chairman,” and has received funding from the Leadership Institute, which that bills itself as a “training ground” for conservative leaders.