" ... Paul's star witnesses, Thomas DiLorenzo, an economist at Loyola University in Baltimore, has called Abraham Lincoln a 'dictator' and 'mass murderer' - and has links to a neo-Confederate group called League of the South. ... " 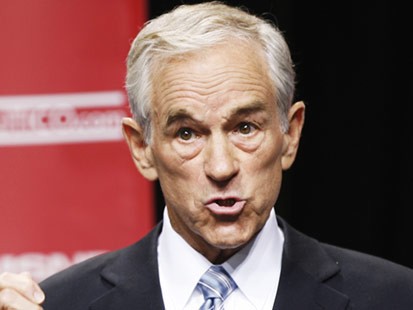 The ranking Democrat on a House panel overseeing the Federal Reserve on Wednesday accused a witness invited by Rep. Ron Paul (R-Texas) of being affiliated with a "hate group."

Clay went after DiLorenzo, an economics professor at Loyola University who was invited to testify by Paul, for his connections with the League of the South, which has been identified by the Southern Poverty Law Center as a "neo-Confederate" group. The league identifies DiLorenzo as an "affiliated scholar" of its League of the South Institute for the Study of Southern Culture and History.

"After reviewing your work and the so-called message you employ, I still do not understand you being invited to testify today on the unemployment situation," Clay said. "But I do know that I have no questions for you." 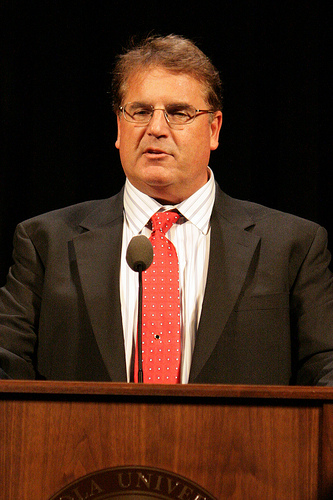 Paul dismissed Clay's comments after the hearing, calling them character attacks in lieu of addressing DiLorenzo's arguments against the Fed. The meeting marked the first hearing of the subcommittee since Paul, a longtime critic of the Federal Reserve, was named its chairman. In his prepared testimony, DiLorenzo accused the Fed of generating "boom-and-bust cycles" since its formation in 1914.

DiLorenzo is also a senior faculty member of the Ludwig von Mises Institute, which promotes the Austrian School of economics, of which Paul is a strong adherent.

After the hearing, Paul was mobbed by an enthusiastic group of well-wishers. Several people asked him to autograph their pocket Constitutions and copies of his book, End the Fed.

The Dallas Morning News has more on Dr. DiLorenzo and the racist underpinnings of the League of the South:

Texas Rep. Ron Paul intended his first hearing as chair of a House subcommittee to showcase one of his complaints about the Federal Reserve - that central planning of the money supply makes unemployment worse, by creating booms that inevitably lead to recessions worse than would otherwise occur.

The hearing did do that. But that was overshadowed somewhat when Democrats noted that Paul's star witnesses, Thomas DiLorenzo, an economist at Loyola University in Baltimore, has called Abraham Lincoln a "dictator" and "mass murderer" - and has links to a neo-Confederate group called League of the South.

The League seeks a Southern breakaway nation led by "European-Americans."

To hear DiLorenzo tell it, linking him to the League is defamation. His only connection, he told the DMN, is that he lectured to some League members "15 years ago" at the invitation of an Emory University professor, and didn't even realize they were League members. He did concede, though, that he sympathizes with anyone who wants to secede from a government they disagree with, be they Southerners in the USA or Soviet Republics under the USSR.

His dismissal of any substantive link don't square with material collected by the Southern Poverty Law Center, which views the League as a hate group.

Issues of the "Southern Patriot" - the League's newsletter - describe DiLorenzo as a lecturer at its 2001 summer school and 2002 national conference. The League also sold tapes of his lectures. In late 2000, he authored a front-page essay for the League's Alabama affiliate about vote fraud; its newsletter identified him as a League member.

And in 2005, DiLorenzo authored an essay defending the League.

Heidi Beirich, research director at the Southern Poverty Law Center, called it "appalling... for a congressman to bring someone in from a group that has these kinds of hate views."

Paul said he didn't know about DiLorenzo's involvement with the League and said Democrats only attacked to deflect attention from the substance of the Fed critique.