In 2013, Josh Doggrell took the stage at the national conference for the Neo-Confederate League of the South (LOS). In a nondescript suit-and-tie, he spoke about gun rights, county supremacy, the state of law enforcement in Alabama and his loyalty to the League.

“It’s wonderful to be around sanity,” the founder and chairman of the League’s John C. Calhoun chapter in a video of the event posted to YouTube.

It was a common speech for a League conference. But Doggrell wasn’t quite a common southern nationalist. He was a police officer, a lieutenant in the Anniston Police Department, and he wasn’t the only one. A second officer from his department, Lieutenant Wayne Brown, joined Doggrell at the convention, and they had come with good news –– good news for any self-respecting southern nationalist at least.

“The vast majority of men in uniform are aware that they’re southerners,” Doggrell said, touching on gun rights and the perennial fear among extremist groups that the Second Amendment is under attack. “And kith and kin comes before illegal national mandates.”

Doggrell knows a little bit about kith and kin. He joined the LOS in 1995 after meeting its presidentMichael Hill at the University of Alabama while Doggrell was a student, serving as the secretary vice chairman and chairman of the school’s LOS chapter before founding his own chapter in 2009.

Kith and kin is part of an explicitly racist ideology called “kinism” that Hill has long promoted through the LOS. The Kinist Institute, an organization that promotes kinism, has called for laws against racial intermarriage, an end to non-white immigration, expelling all “aliens” (“to include all Jews and Arabs”), and restricting the right to vote to white, landholding men over the age of 21. In the past, LOS websites have referred to kinism as “a biblical solution for all races” that will save the South by preventing “white genocide.”

It was an odd thing for a police officer to say, especially one from Anniston. Fifty years earlier, Klansmen firebombed several buses carrying civil rights workers, known as Freedom Riders, coming to the South to test a U.S. Supreme Court ruling ordering that buses be desegregated. On May 14, 1961, in Anniston, a mob of Klansmen, some reportedly still wearing their Sunday church clothes, attacked and firebombed the riders. Police did nothing.

But Doggrell has never hidden his extremist ties, not from his family – in 2013, his two-year-old was already a League member – and definitely not from his employer. As Doggrell boasts elsewhere in the video, his superiors are well aware of his associations.

“It’s always wonderful to go back and show my bosses all the radicals that I cavort with on the weekends,” he boasts.

The video was posted on YouTube two years ago by the Southern Nationalist Network and has only recently came to the attention of Hatewatch, which immediately sought to bring Doggrell’s associations to the city’s attention.

After Hatewatch initially alerted the chief of the Anniston Police Department about Doggrell’s membership, further calls were referred to Brian Johnson, Anniston city manager, who told Hatewatch that even if the city was aware of police officers being a member of such “civic club,” there was only so much they could do.

When posed with the hypothetical of a police officer being a member of the Ku Klux Klan (KKK), Johnson elaborated by stating that, “We could not terminate an employee solely on his or her membership in a legal, lawfully formed, civic club or organization.” He added that it was “unfortunate” the city had to answer for Doggrell’s involvement in the LOS, especially at a time when policing practices are increasingly scrutinized amid a rash of stories of police violence and examples of biased, even racist officers. But, Johnson said, “I do not believe that someone could be terminated solely based on their private sector membership in a properly formed legal organization – as hateful as the KKK might be.”

Other cities have not been so laissez-faire about extremists and racists in their ranks.

Given the deep racism that is central to the LOS, it seems odd of the city to ignore the possible conflicts of interest when acting as a police officer. The League has in recent years taken on increasingly racist and violent antigovernment rhetoric. Early last month, Hill penned an article for the LOS website entitled “A few notes on an American race war.” 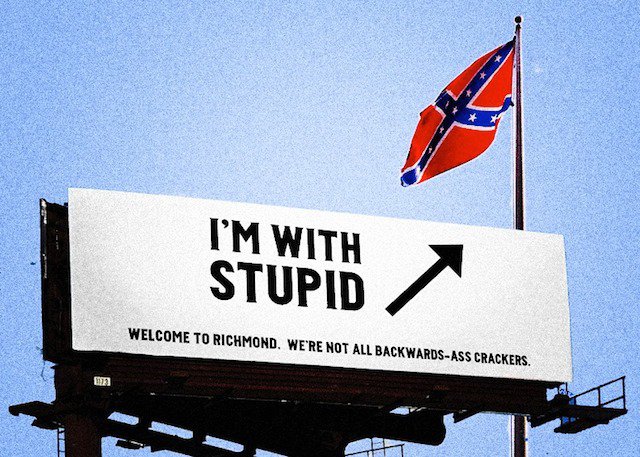 “Negroes are more impulsive than whites,” Hill wrote. “Tenacity and organization are not the negroes [sic] strong suits. If [a race war] could be won by ferocity alone, he might have a chance. But like the adrenaline rush that sparks it, ferocity is short lived. And it can be countered by cool discipline, an historic white trait, and all that stems from it.”

These pronouncements are doubly serious given news first announced on this blog that the LOS wasforming a uniformed, paramilitary unit called “the Indomitables” tasked with advancing a second southern secession by any means necessary. The group has also become increasingly anti-Semitic. This past May, Hill suggested that one of the South’s main problems is “Jewry” and what he depicts as the Jewish-controlled media. “ABC, NBC, CBS, CNN, MSNBC, and other largely Jewish-Progressive owned media would doubtless fan the flames, justifying black behavior while conversely condemning white reaction,” Hill wrote at the time as he contemplated the difficulties that will face the white man.

As for Doggrell, he has some racial views of his own.

In a Facebook post from March of this year, Doggrell asked his followers, “When ‘minorities’ become the majority, why do we still call them minorities?” Hill responded to that post by stating, “So they can still be demonized and destroyed … if they are white (and especially white Christians).”

Later that month, following the Supreme Court’s decision that Alabama’s legislative districts are racially gerrymandered, Doggrell authored a post stating, “So, the robed oligarchs say that gerrymandering is not an issue of right or wrong, legal or illegal—at least on its face. It is a matter of whether or not it benefits blacks (which makes it okay), or if it does not benefit blacks (which means it is not okay).”

Such suspicions regarding the government’s treatment of race relations are only the beginning of Doggrell’s disdain for the federal government.

“What a despondent situation we find ourselves in, as southern men and women, when the very institutions that we grant extraordinary powers in an effort to serve us are abused and misused by a manipulating national government that seeks to make a tool out of local police that can be used to destroy us when the time comes,” Doggrell lamented in his 2013 presentation. But countering Johnson, Doggrell insists the city and the police department know all of what he does in his off time.

In a closing question-and-answer session to his 2013 presentation, Doggrell, who was investigated by the police department and cleared in 2009 for his LOS ties, recounted an interaction with his then chief a year prior. In anticipation of questions about his LOS affiliations, Doggrell told the chief, “I’m not going to sell out my position with the League, as something I believe in strongly. If it came down to it, I’d choose the League.”

According to Doggrell, the chief responded, “We pretty much think like you do.”

If that’s the case, the Anniston police department may have even bigger problems than Doggrell.

Editors’ Note –– Ryan Lenz contributed to the reporting of this article.

No Reparations for Victims of Virginia's Eugenics Sterilization Program