When the gunman let a witness go free, he allegedly said, according to a cousin of a victim, "I have to do it. You rape our women and you're taking over our country," referring to the black community. In a photo on his Facebook profile, which has since been removed, Roof wears a jacket adorned with white-pride symbols.

The chilling part here: Roof's alleged statement is a common mantra among white nationalist groups on Internet forums like Stormfront, a popular white pride forum that was launched by a former Ku Klux Klan leader in the early 1990s.

The phrase "you rape our women" in particular stems from widespread racist ideology, writes the New Republic: For white supremacists, the idea of "sharing ... space or power" with African-Americans, whether in government, society or even physical location, is akin to real assault on the metaphorical body of a (supposedly) formerly all-white nation.Inevitably, less than two hours after the shooting, a thread about the event popped up on Stormfront. The conversation quickly grew to dozens of pages of comments dedicated to whether or not it's right to shoot black people while they're at church, how Roof is contributing to the cause of "taking back the country" and where they can find the flag or patch representing the Rhodesian Front, an extremist right-wing political party who held the mostly black population of Rhodesia under white rule.

The myth of black men taking over America and raping white women is widespread. You'll find it all over online white supremacy forums, in comments, rants and even songs like the Midtown Bootboys' "Coon Hunt," which describes a "gang" of black men: "They rape our women and rob our homes / We want our kinfolk left alone / Let's put 'em on a boat and send 'em back." The rest of the lyrics, which you can read here, describe shooting black people and painting walls with their blood.

Elsewhere, you'll find rants like this, from the white supremacist Vanguard News Network:

And on Dailystormer: "The rape and murder of our women and children in England by nonwhites ... the greatest crime every committed against us by a nation." 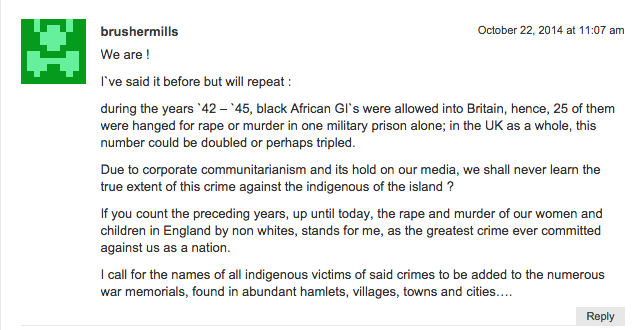 "Raping women and forcing drugs on our youth":

Excerpt from "ROMANTIC VIOLENCE: Memoirs of an American Skinhead"Source: Issuu

At this point, it's not clear what Roof's online presence looks like, or if, like Isla Vista, California, shooter Elliot Rodger, he subscribes to an ideology that positioned white men as victims and women and people of color as their tormentors and aggressors. But Roof's alleged statements reflect a philosophy that advocates brutal violence against African-Americans.

In 2014, the Guardian reported that almost 100 hate-crime murders stemmed from conversations on Stormfront, which at the time boasted 286,000 users. These crimes include the 2011 massacre in Norway, the 2012 shootingat a Wisconsin Sikh temple and the 2014 killing of three people at a Jewish center in Kansas City.

"The fact of the matter is that more people have been killed domestically by radical right extremists than Islamic extremists since 9/11 and where you find a lot of these people is on these sites," said Heidi Beirich, director at the Southern Poverty Law Center, according to the Guardian. "Unfortunately it's not very surprising that people who live in this kind of stew of violent racism eventually pick up a gun and do something about it at some point."

Dylann Roof may have entered that church alone. But countless killers before him acted on behalf and with the approval of a massive online hate collective.

The Facebook profile photo of Dylann Roof, the 21-year-old who is believed to have shot nine black people at the Emanuel African Methodist Episcopal Church in Charleston, South Carolina, has gone viral. Not much is known about Roof, but the jacket he dons in this picture speaks volumes.

The two flags on the right side of his jacket are symbols of the white nationalist movement, representing African colonies when they were ruled by minority white settlers through subjugation of the majority black locals.

Roof's jacket represents Zimbabwe and South Africa's painful history of colonization. Ideologically, their symbolism is congruent with a survivor's account of Roof's attack, in which he allegedly said, "I have to do it. You're raping our women and taking over the country. You have to go."

The top flag, which the Anti-Defamation League considers a white supremacist symbol, represented South Africa while it was under the control of the Nationalist Party, which was composed of white Afrikaners, descendants of the Dutch colonizers. During this period, from 1948 to 1994, the Nationalist Party enforced apartheid, the codified segregation of whites and blacks. Under apartheid, black South Africans were forcibly resettled, a large swath of the black South African population was killed and political opponents were imprisoned, the most famous example being Nelson MandelaIt was only after Mandela was freed and helped to negotiate the end of apartheid with the Nationalist Party in the early '90s that the country became independent, with a transition to Mandela's African National Congress party after the first democratic elections.

These kinds of flags have become powerful symbols for white supremacists. The website Stormfront, also known as White Pride Worldwide, has a forum for the different flags supremacists have collected, with one user posting, "I would like to get a Rhodesian flag, and the pre-1918 German flag (Kaiser Reich)."

As more information about Roof unfurls, it seems increasingly hard to deny this was a racially motivated act of terrorism.