An Underreported GOP Fundraising Scandal Brews in Florida, while the Press Pursues a Phony Democratic "Sex Scandal" in NY State 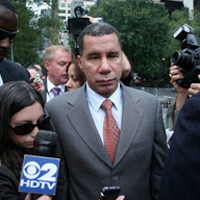 A phony Democratic Party "scandal" has been "exposed" by Rupert Murdoch's New York Post - involving rumors of NY Gov. David Paterson's supposed sexual promiscuity  - threatening to destroy his political career. In a gossip piece, the Post reported, "Paterson was spotted nuzzling, neck-kissing and cooing like a smitten schoolboy with a pretty young woman — not his wife — in a New Jersey steakhouse. ... " The affair was a typically salacious Murdochian fantasy. The "rumors" were baseless. Paterson's aides have stated that there was "zero truth to it."

A prequel to the scandal made headlines in November, 2009 - the arrest of GOP fundraiser Scott Rothstein, a bundler for Crist and John McCain in his recent presidential run. With the charge that Rothstein, "fast-living Fort Lauderdale attorney and friend and donor to Gov. Charlie Crist, orchestrated a massive fraud out of his law firm, there are now three Crist moneymen caught up in alleged criminal or extremely shady activity," TPMMuckraker's Justin Elliott wrote in November.

The scandal continued to swell in Florida - and even big Republican donors in the Sunshine State are outraged over the mishanding of their funds - but the press has limited interest in it.

The "Politics AP" website, an exception, reported on February 5:

... A lucrative secret contract awarded to the top deputy for Florida GOP Chairman Jim Greer has Republican leaders livid as they try to repair the financially ailing party during this key election year.

The contract between Greer and Delmar Johnson -- the 30-year-old staffer named by Greer to be the Republican Party of Florida's executive director -- paid Johnson's company more than $260,000 for fundraising and $42,000 for expenses. Combined with Johnson's $103,000 executive director salary, he was paid at least $405,000 by the party in 2009, according to year-end reports filed this week with the Federal Election Commission.

Both Greer and Johnson are now being forced out of office ...

Curiously, even Marco Rubio, Crist's Senatorial contender, has been mum on the GOP scandal, as Mike Thomas of the Orlando Sentinel reports in his blog:

Why is Marco Rubio mum on Republican scandal?

Marco Rubio’s campaign hasn’t hesitated to bash Charlie Crist about anything and everything. Every time Charlie opens his mouth, I get a zinger from Rubio headquarters within 30 seconds.

But here we have the biggest scandal in recent memory swirling around the Florida Republican Party, all of it centered around Crist’s hand-picked party leader, Jim Greer, and his hand-picked fundraiser Delmar Johnson, and Rubio hasn’t said word one.

This concerns the reckless and rampant spending of Party money by officials who used the company AMEX as a slush fund.

Given that the buck stops with Charlie, why hasn’t Rubio pounced on this? Did Marco have a party AMEX?

The Republicans, or some of them, are implementing the failed strategy of trying to sit on this and handle it internally. Ain’t going to happen. Make everything public. Bleed it out. And get it out of the news cycle.

The Post and New York Times have been  all over David Paterson with imaginary trysts,  but an unsettling silence obscures the real financial scandal down in Florida.

It just dawned on me that I haven't heard anyone defend the manipulative American  media for years.  Why would that be? ...