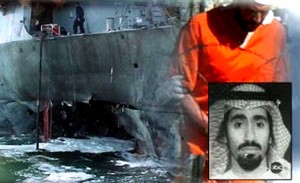 Last week the Department of Defense announced that Khalid Sheik Mohammed and four co-conspirators accused of orchestrating the 9/11 attacks will be arraigned next month before the military commission system in Guantanamo Bay, Cuba. On Wednesday, I observed a pretrial hearing in the case of Abd al Rahim Hussayn Muhammad al Nashiri in which the very system tasked to administer justice for the 9/11 tragedy was under serious attack. This doesn’t bode well for the 9/11 trial or the legitimacy of that verdict.

Al-Nashiri is charged with crimes for his alleged role in the USS Cole bombing, the USS The Sullivans attempted bombing, and the bombing of a French civilian oil tanker MV Limburg. As I’ve explained before, trying al-Nashiri before the military tribunal is risky business because the case raises serious legal questions about the tribunal’s jurisdiction and its rules of evidence.

Today’s hearing focused on a host of motions that went to the heart of the military commissions system’s legitimacy.

First up was whether Nashiri’s testimony about his treatment in CIA custody – his torture by CIA agents has already been made public – would need to be conducted in closed session. Judge Pohl ultimately avoided ruling on whether Nashiri’s testimony about his torture would be closed to the public by granting defense counsel’s motion that Al-Nashiri be unrestrained during legal meetings with his counsel,. But this question will certainly rise again. And at stake is a fundamental question of whether the military commission system provides sufficient transparency to warrant legitimacy and public trust.

The laws of war do not distinguish between aliens and citizens, he argued. Indeed, not only does international law not distinguish based on citizenship, it prohibits such discrimination. And so does the U.S. Constitution. Therefore, the military commissions are unconstitutional and neither al-Nashiri nor anyone else should be tried in them.

As I said, this is not looking good for the upcoming 9/11 trial.

The hearing then turned to a series of motions on whether the military commission system, which is designed to try war crimes, even has jurisdiction over crimes of conspiracy and terrorism, which are not war crimes under international law.

Judge Pohl asked if all of this simply turned on Al-Nashiri’s status as an “unprivileged enemy belligerent.”

The question is an important one. After all, one can only be an “unprivileged enemy belligerent” during an armed conflict, and the crimes al-Nashiri is accused of both occurred in 2000 — before 9/11, before the Authorization to Use Military Force (AUMF), and before the onset of an armed conflict with al Qaeda. Although the attack of the M/V Limburg occurred in 2002, the government still has to demonstrate that an attack on a French-flagged civilian oil tanker beyond the zone of hostilities between the U.S. and al Qaeda or the Taliban was part of the armed conflict contemplated by the AUMF.

“Unprivileged enemy belligerent” simply means that a person does not have immunity from criminal prosecution for targeting a lawful military objective – for example, killing an enemy soldier in a time of war. Such a killing could be a crime under domestic law, but it is not a war crime under international law.

Indeed, no crime committed during war is considered a war crime. Moreover, even though Congress can create “new” war crimes under domestic law, it cannot apply such new laws retroactively. Prosecuting people for conduct that was not a crime when they committed the act violates the ex post facto prohibition enshrined in the US Constitution and the international legal principle of legality. Yet this is exactly what the government is trying to do in the al-Nashiri case.

At Wednesday’s hearing, Judge Pohl appeared to listen carefully to each side’s arguments. He promised to issue a ruling “in due time.”