For once, the European Union’s scientific advisers seem to have got something right. Three pesticides have been banned for two years after the wise boffins voiced concerns after their harmful effect on honey bees. The measure is of immense importance: about one-third of the fruit and vegetables in our diets are grown with the aid of insect pollination, so threats to bees imperil food production in general.

This isn’t the end of the story, however.  While the European Food Safety Authority (EFSA) in Parma, Italy, should be applauded for initiating the research which led to the bans, that body continues to behave as if it is joined at the hip with big business.

The bees dossier offers a case in point.

EFSA’s assessments of whether pesticides are safe are conducted by a panel of “experts”, several of whom also undertake research financed by the chemical and agri-food industries. One of those “experts” – Ettore Capri from Italy – even runs a “think tank”, the main purpose of which is to downplay the dangers associated with pesticides. Known by the acronym OPERA, this outfit recently published a report titled “Bee health in Europe”. The report seeks to shift the focus from pesticides by pinning the blame for dwindling bee numbers on a “wide range of factors”.

Though the document may be liberally sprinkled with scientific terminology, it cannot be considered as objective or unbiased.  A careful reading shows that it was prepared with the help of Bayer, Syngenta, Dow and BASF. All of those firms make pesticides; their bottom line depends on being able to persuade regulators to approve their products.

I contacted EFSA spokesman James Ramsay, asking him if he accepted that Capri was involved in a conflict of interests.  “No,” Ramsay replied.  He told me that OPERA was viewed by the authority as a “food safety organization” as it pursues “public interest objectives”.

When I got in touch directly with Capri, he insisted that he is not involved in “research projects financed by private companies on bee health” and that he had not taken part in an EFSA working group dealing with bees.

Those explanations are Jesuitical.

OPERA’s entry to the register of lobbyists run by the European Commission states that it received 50,000 euros from the private sector during 2012. If that money wasn’t used on its research and advocacy work, then what was it used on? Interior decorating? Bus fares? Moreover, OPERA jointly organised a conference with Syngenta in Brussels during September 2012.  The programme for the event says that one of the main topics addressed was biodiversity, a concept that is meaningless without bees and other insects.  Are we really to believe that Syngenta did not pay at least some of the costs of organising this event?

Capri’s effort to distance himself from EFSA’s work on bees is contradicted by information on the authority’s own website. A list of participants for a “symposium” hosted by EFSA last month indicates that Capri was in attendance. You’ll never guess the topic of this confab. Bees.

Faced with accusations that they are setting the agenda followed by EU institutions, corporate lobbyists tend to point to decisions which didn’t go the way they wanted as evidence that they are not really that influential. The ban on bee-killing pesticides looks like that kind of a decision – until you examine it a bit more closely.

Firstly, the ban is of a limited duration: we can be certain that the chemicals industry will be pressing for it not to be renewed once it expires.  Secondly, it has loopholes: the three pesticides may still be sprayed on winter cereals.  Such crops may not attract bees directly but the use of pesticides on them means that toxic chemicals will still be released into the environment, with potentially adverse consequences for insects.

And thirdly, there are some dangerous substances not covered by the ban.  Greenpeace has identified four pesticides in addition to the three ones recently banned that have been shown to “acutely affect bees”, according to the group.  These pesticides are widely used throughout Europe.

EFSA, again to its credit, has issued a warning about one the four substances – fipronil – over the past few weeks.  Almost definitely, it will come under pressure from the chemical industry to ease off on its work on bees.  Having scientists who are favourably disposed to pesticide-makers sitting on EFSA panels undoubtedly works to that industry’s advantage.

There are bigger issues than honey bees at stake here.  As I argue in my new book Corporate Europe, EFSA is in denial about how many of the “experts” it turns to for counsel are lackeys of big business.  The authority has been admonished by the EU’s internal watchdogs, the Court of Auditors and the Ombudsman, on some of these matters; yet the underlying problems persist.

In 2008, EFSA suffered some embarrassment when it emerged that Suzy Renckens, who coordinated its activities on genetically modified (GM) foods, was hired by Syngenta, a  maker of GM seeds (as well as pesticides).  The “revolving door” case begged the question: how can regulators be expected to put manners on firms they regard as future employers?

Syngenta supports Capri’s activities but EFSA doesn’t see this as in any way problematic.  Syngenta has also lobbied strenuously against the ban on bee-killers.

There’s only way of pretending there’s nothing wrong here: burying your head in the sand.

David Cronin’s book Corporate Europe: How Big Business Sets Policies on Food, Climate and War will be published in August. It can be pre-ordered now from Pluto Press (www.plutobooks.com).

A version of this article was originally published by New Europe. 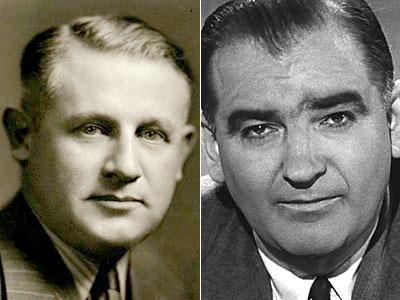 How Joseph McCarthy Drove a Senator to Suicide
Jun 13