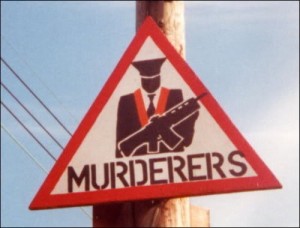 Shum Khan, a man both deaf and unable to speak, lived in the remote border hamlet of Malekshay, 7,000ft up in the mountains. When a heavily armed squad from the CIA barrelled into his village in March 2007, the war logs record that he "ran at the sight of the approaching coalition forces … out of fear and confusion".

The secret CIA paramilitaries, (the euphemism here is OGA, for "other government agency") shouted at him to stop. Khan could not hear them. He carried on running. So they shot him, saying they were entitled to do so under the carefully graded "escalation of force" provisions of the US rules of engagement.

Khan was wounded but survived. The Americans' error was explained to them by village elders, so they fetched out what they term "solatia", or compensation. The classified intelligence report ends briskly: "Solatia was made in the form of supplies and the Element mission progressed".

Behind the military jargon, the war logs are littered with accounts of civilian tragedies. The 144 entries in the logs recording some of these so-called "blue on white" events, cover a wide spectrum of day-by-day assaults on Afghans, with hundreds of casualties.

They range from the shootings of individual innocents to the often massive loss of life from air strikes, which eventually led President Hamid Karzai to protest publicly that the US was treating Afghan lives as "cheap". When civilian family members are actually killed in Afghanistan, their relatives do, in fairness, get greater solatia payments than cans of beans and Hershey bars. The logs refer to sums paid of 100,000 Afghani per corpse, equivalent to about £1,500.

US and allied commanders frequently deny allegations of mass civilian casualties, claiming they are Taliban propaganda or ploys to get compensation, which are contradicted by facts known to the military.

But the logs demonstrate how much of the contemporaneous US internal reporting of air strikes is simply false.

Last September there was a major scandal at Kunduz in the north of Afghanistan when a German commander ordered the bombing of a crowd looting two hijacked fuel tankers. The contemporaneous archive circulated to Nato allies records him authorising the airstrike by a US F-15 jet "after ensuring that no civilians were in the vicinity". The "battle damage assessment" confirmed, it claims, that 56 purely "enemy insurgents" had died.

Media reports followed by official inquiries, however, established something closer to the real death toll. It included 30 to 70 civilians.

In another case the logs show that on the night of 30 August 2008, a US special forces squad called Scorpion 26 blasted Helmand positions with multiple rockets, and called in an airstrike to drop a 500lb bomb. All that was officially logged was that 24 Taliban had been killed.

But writer Patrick Bishop was embedded in the valley nearby with British paratroops at their Sangin bases. He recorded independently: "Overnight, the question of civilian casualties took on an extra urgency. An American team had been inserted on to Black Mountain … From there, they launched a series of offensive operations. On 30 August, wounded civilians, some of them badly injured, turned up at Sangin and FOB Inkerman saying they had been attacked by foreign troops. Such incidents gave a hollow ring to ISAF claims that their presence would bring security to the local population."

Some of the more notorious civilian calamities did become public at the time. The logs confirm that an entirely truthful official announcement was made regretting the guidance system failure of one "smart bomb". On 9 September 2008 it unintentionally landed on a village causing 26 civilian casualties.

The US also realised very quickly that a Polish squad had committed what appeared to have been a possible war crime. On 16 August 2007 the Poles mortared a wedding party in the village of Nangar Khel in an apparent revenge attack shortly after experiencing an IED explosion.

It is recorded under the heading: "Any incident that may cause negative media". The report disclosed that three women victims had "numerous shrapnel wounds … One was pregnant and an emergency C-section was performed but the baby died". In all, six were killed. The Polish troops were shipped home and some eventually put on trial for the atrocity. After protests in their support from a Polish general, the trial has apparently so far failed to reach a conclusion.

But most of the assaults on civilians recorded here, do not appear to have been investigated. French troops "opened fire on a bus that came too close to convoy" near the village of Tangi Kalay outside Kabul on 2 October 2008, according to the logs. They wounded eight children who were in the bus.

Two months later, US troops gunned down a group of bus passengers even more peremptorily, as the logs record.

Patrolling on foot, a Kentucky-based squad from 1st Battalion, 506th Infantry Regiment, known as "Red Currahee", decided to flag down the approaching bus, so their patrol could cross the road. Before sunrise, a soldier stepped out on to Afghanistan's main highway and raised both hands in the air.

When the bus failed to slow – travellers are often wary of being flagged down in Afghanistan's bandit lands – a trooper raked it with machine-gun fire. They killed four passengers and wounded 11 others.

Some of the civilian deaths in the list stem from violent actions by US special forces attempting to hunt down Taliban leaders or al-Qaida incomers. In a typical case, last November, the army files record a demonstration by 80 angry villagers who broke an armoured car window in the village of Lewani. A woman from the village had been killed in an assault by the shadowy Task Force 373.

The influence of the then new commander, General Stanley McChrystal, can be seen, however. Brought in last year with a mission to try to cut the number of civilian casualties, he clearly demanded more detailed reporting of such incidents.

The Lewani file is marked with a new "information requirement" to record each "credible allegation of Isaf [the occupying forces] … causing non-combatant injury/death".

McChrystal was replaced last month, however, by General David Petraeus, amid reports that restraints aimed at cutting civilian deaths would be loosened once again.

The bulk of the "blue-white" file consists of a relentless catalogue of civilian shootings on nearly 100 occasions by jumpy troops at checkpoints, near bases or on convoys. Unco-operative drivers and motorcyclists are frequent targets.

Each incident almost without exception is described as a meticulous "escalation of force" conducted strictly by the book, against a threatening vehicle.

US and UK rules require shouts, waves, flares, warning shots and shots into the engine block, before using lethal force. Each time it is claimed that this procedure is followed. Yet "warning shots" often seem to cause death or injury, generally ascribed to ricochets.

Sometimes, it seems as though civilian drivers merely failed to get off the road fast enough. On 9 July 2006 mechanic Mohamad Baluch was test-driving a car in Ghazni, when the Americans rolled into town on an anti-IED "route clearance patrol".

The log records: "LN [local national] vehicle did not yield to US convoy … Gunner on lead truck shot into the vehicle and convoy kept going out of the area." The townspeople threw rocks at the eight departing armoured Humvees. Baluch ended up in hospital with machine-gun bullets in his shoulder.