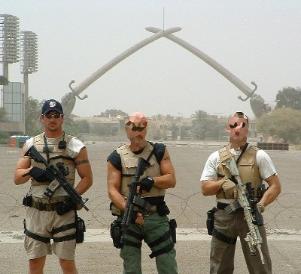 A  lawyer for the former Blackwater president who has been charged with gun crimes hinted at his client's defense Wednesday, telling a North Carolina court room that a US government agency approved of what the company was doing.

Ken Bell -- attorney for Gary Jackson, who was arrested last week along with four other Blackwater staffers -- told the court that "all of this was with the knowledge of, the request of, for the convenience of, an agency of the US government," reports the News & Observer in North Carolina.

While Bell would not say which US government agency that may have been, the News & Observer article suggests that he was talking about the CIA.

"The company has close ties to the Central Intelligence Agency. The company has provided security to CIA stations and officers in Afghanistan and other countries, and several Blackwater officials were once high ranking CIA officials," the article states. Federal prosecutors indicted Jackson, who was president of Blackwater until last year, last week in a case that stemmed from a raid on Blackwater's North Carolina headquarters in 2008, which turned up 22 automatic weapons, including 17 Russian-made AK-47s.

"The 22-page indictment includes accusations of falsifying paperwork to give a firearms gift to the king of Jordan and using the Camden County Sheriff's Office, which had less than a dozen uniformed officers at the time, as a front to buy AK-47s for Blackwater's training facility in Moyock," the News & Observer reports.

Prosecutors told the court in Wednesday's bail bond hearing that, as president, Jackson ran Blackwater with "sheer arrogance" and a "scofflaw attitude," the Associated Press reports.

The News & Observer states that, if the agency involved is indeed the CIA, it may complicate the trial because of the presence of classified information.

Lawyers and court personnel need security clearances, and special evidence rooms are required. Special computers are needed to draft motions, according to Richard Myers, a UNC law professor who has worked with classified materials both as a prosecutor and as a defense attorney.

In February, the Senate Armed Services Committee found "reckless" use of weapons by Blackwater employees in Afghanistan, and found Blackwater staffers had removed weapons from US military facilities without proper authorization.

In one instance, a Blackwater employee signed out military weapons under the name "Eric Cartman," a character in TV's South Park.

The former president of Blackwater Worldwide and four of his past colleagues at the North Carolina security firm can remain free as they await trial on federal weapons charges, a judge ruled Wednesday.

U.S. Magistrate Judge James Gates denied the government's request to set a bond for the suspects, including a proposed $250,000 bond for former Blackwater President Gary Jackson. Gates did order all five defendants to turn over their passports and refrain from possessing guns.

At the hearing, prosecutors accused Jackson of flouting federal regulations with "arrogance." An attorney for Jackson said government officials previously knew of many of the activities discussed in the indictment, which was handed up last week.

The case stems in part from a raid conducted by federal agents at the company's headquarters in Moyock in 2008 that seized 22 weapons, including 17 AK-47s.

The maximum penalty for each charge ranges from five to 10 years in prison and a fine of up to $250,000.

Blackwater has been trying to rehabilitate its image since a 2007 shooting in Baghdad that killed 17 people, outraged the Iraqi government and led to federal charges against several Blackwater guards. The accusations later were thrown out of court after a judge found prosecutors mishandled evidence.