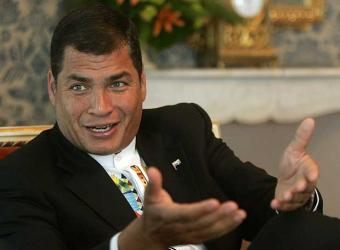 ” … The Central Intelligence Agency (CIA) is using drug money to fund Rafael Correa’s opposition in the coming 2013 Ecuadorian elections…. The allegations were made public by President Rafael Correa on November 3rd on national television…. “

The Central Intelligence Agency (CIA) is using drug money to fund Rafael Correa’s opposition in the coming 2013 Ecuadorian elections, intelligence sources have revealed to Chilean independent media. The accusations do not stand alone. In October, former UK diplomat Craig Murray said that the CIA had tripled its budget to destabilize the government of Ecuador.

The allegations were made public by President Rafael Correa on November 3rd on national television, just days after his official visit to Chile to meet with President Sebastian Piñera.

Correa reaffirmed information that appeared in an article written by Chilean independent media outlet Panoramas News, revealing that the CIA and DEA stations in Chile were running a narcotics trafficking network through that country with the full knowledge of Chilean authorities and police.

One of the sources quoted by Chilean media, a former police officer in the Policia de Investigaciones (PDI) by the name of Fernando Ulloa, said that 300 kilograms of cocaine were entering Chile monthly under the escort of members of his own institution, the Carabineros, and the Chilean Army. In May 2011, Fernando Ulloa met with then Chilean Minister of Interior Rodrigo Hinzpeter in La Moneda to inform him about the drug network. After more than one year, the Piñera’s government had done nothing to investigate the case.

The scandal resurfaced again after 10 Chilean cops were detained with links to a minor drug smuggling ring, not connected to the one Ulloa was exposing. Although Chilean television was more open to talk about police corruption, Ulloa was only interviewed by two TV networks, where he accused Minister Rodrigo Hinzpeter of covering up the larger narcotics ring he was investigating before being kicked out of his job as PDI inspector.

The links to US intelligence emerged after an anonymous source from the Agencia Nacional de Inteligencia (ANI) told Panoramas News that the smuggling of 300 kilos of cocaine was in fact a highly sensitive CIA/DEA operation that would help to raise money to topple the government of Ecuador. The operation is similar to the one carried out by the Agency in Central America during the Iran-Contra scandal in the 1980’s, the source said.

The director of Panoramas News, journalist Patricio Mery Bell, was planning to hand over the information to Rafael Correa while the Ecuadorian President was visiting Chile, but he was strangely accused of beating a woman after she stole his cell-phone. The cell-phone memory contained a video testimony of Mery’s intelligence source, destined to be passed to Correa, but it ended up in the hands of the police after the mysterious incident.

Once he was in Ecuador, President Rafael Correa connected the dots and decided to go public with the information. He quoted Murray’s early warnings about the CIA’s intent to “fund, bribe or blackmail media and officials”, originally written in the former diplomat’s own blog, adding that the Agency was dealing drugs just as Oliver North had done during the Contra support effort.

Im am interview with NTN24,, journalist Patricio Mery added more details to the case, relating the cover-up of the CIA drug dealing operation to the deaths of two different people in the last seven years: former soldier Fabian Vega, who was found hung in the northern city of Calama in 2005, and young citizen Nestor Madariaga Juantok, found death with two bullets in the port of Valparaiso in 2006. Both were ruled as suicides.

For translation, click on the CC (captions) widget, choose Spanish, then select Translate and English (or preferred language).

Mery also gave the name of the alleged CIA liaison with the Chilean Navy, former captain Jesus Saez Luna, who is now being held in a penitentiary after he mysteriously escaped from Navy custody. Saez Luna was described in his arrest as the biggest drug dealer of the coastal city of Viña del Mar, with networks in Santiago de Chile and the Bio-Bio southern region of the country. Known as “El Marino”, the former captain utilized “military intelligence” tactics to avoid detection by police, according to the Chilean newspaper La Segunda.

The case is being depicted as “Chile-Contras”, in reference to the history of CIA narcotics trafficking in Nicaragua. This is just another example of how drug money is used to fund covert operations, such as the ones we have seen in Syria, with whole guerrilla armies and opposition forces being financed to overthrow countries that aren’t part of the Anglo-American establishment and don’t bow to American corporate interests.

This article was originally posted at Strapp Magazine

Previous Article
HOW IS MARGARINE MADE?
Next Article
Nanotechnology: R&D Chief at Nano Labs Turns Tequila into Diamonds