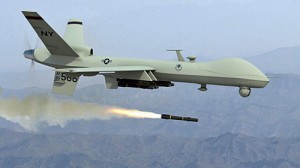 Today, nine organizations submitted a friend-of-the-court brief in support of the ACLU's Freedom of Information Act lawsuit seeking records about the CIA's use of drones to carry out targeted killings around the world.

The organizations work on a diverse array of issues that don't always overlap, including international human rights and rule of law, government transparency, investigative journalism, civil liberties and national security policy. Although some of these groups seldom have occasion to collaborate, they joined together to urge the court to reject the CIA's position that it can't confirm whether it has a drone strike program at all.

The ACLU filed its appeal brief in the case last week in Washington. We argued that because high-ranking government officials have already acknowledged the existence of the drone program in public, the agency can't try to avoid public scrutiny by refusing to acknowledge the same program in court. Today, the amicus brief added depth to that argument by carefully cataloguing just how much information about the drone program has already been made public by government officials, frequently quoted anonymously in press reports.

Here's how the amicus brief framed the issues:

In this Freedom of Information Act ("FOIA") lawsuit, the CIA maintains that revealing the very existence of records relating to its program of targeted killing via drone-based missile strikes would expose a classified secret and cause national security harms. The existence of the CIA's targeted killing program, however, is so widely acknowledged and heavily reported upon that it can hardly be called a secret anymore.

First, the President and the CIA Director have officially acknowledged the CIA's targeted killing program. Second, unnamed government officials have not only confirmed the program's existence, but revealed important details, such as its geographic scope and target selection process. Moreover, the Attorney General publicly defended the program in a recent speech that provided the government's legal rationale for targeted killings. The volume and breadth of program information originating from government officials calls into grave doubt the CIA's claim that national security harms will result from the CIA merely acknowledging that it has responsive records.

The public has a significant interest in obtaining information on the CIA's program, as demonstrated by the fierce ongoing public debate on the issue of targeted killing. Having tolerated or allowed significant informational disclosures on the classified program, the CIA should not be allowed to hide behind its "Glomar" response to avoid the governmental accountability and transparency enabled by FOIA.

The organizations signing the brief are:

The brief was written by the National Security Clinic at the University of Texas at Austin School of Law.