" ... Even conservative polls suggest a majority in Wisconsin is opposed to Walker's attempt to eliminate collective bargaining. ... " 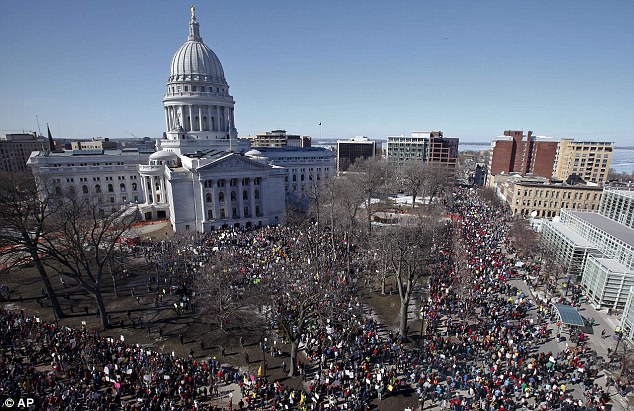 Gary Younge guardian.co.uk, Sunday 27 February 2011 17.59 GMT Article historyYou can tell a great deal about a nation's anxieties and aspirations by the discrepancy between reality and popular perception. Polls last year showed that in the US 61% think the country spends too much on foreign aid. This makes sense once you understand that the average American is under the illusion that 25% of the federal budget goes on foreign aid (the real figure is 1%).

Similarly, a Mori poll in Britain in 2002 revealed that more than a third of the country thought there were too many immigrants. Little wonder. The mean estimate was that immigrants comprise 23% of the country; the actual number was about 4%.

Broadly speaking, these inconsistencies do not reflect malice or wilful ignorance but people's attempts to make sense of the world they experience through the distorting filters of media representation, popular prejudice and national myths. "The way we see things is affected by what we know and what we believe," wrote John Berger in Ways of Seeing. "The relation between what we see and what we know is never settled."

When it comes to class, Americans have long seen themselves as potentially rich and perpetually middling. A Pew survey in 2008 revealed that 91% believe they are either middle class, upper-middle class or lower-middle class. Relatively few claim to be working class or upper class, intimating more of a cultural aspiration than an economic relationship. Meanwhile, a Gallup poll in 2005 showed that while only 2% of Americans described themselves as "rich", 31% thought it very likely or somewhat likely they would "ever be rich".

But trends and ongoing events are forcing a reappraisal of that self-image. Social mobility has stalled; wages have been stagnant for a generation. It is in this light that the growing resistance to events in Wisconsin must be understood. The hardline Republican governor, Scott Walker, has pledged to remove collective bargaining rights from public sector unions and cut local government workers' health benefits and pension entitlements.

As the prospect of becoming rich diminishes, many are simply trying not to become poor. Inequality of income and wealth has been more readily accepted in the US because equality of opportunity has long been assumed. The absence of the latter raises serious questions about the existence of the former. This tension brought thousands to the streets in all 50 states to support the Wisconsin unions last weekend.

For Walker's measures to pass, a certain number of local senators must be present in the chamber for the vote. To prevent that happening, the entire Democratic delegation fled the state and is refusing to return until Walker agrees to negotiate. Meanwhile, thousands of pro-union demonstrators have descended on the state capital to protest, sparking solidarity rallies nationwide.

Coming so soon after Republican electoral victories at federal and state level, Walker might have anticipated an easier ride for his agenda than this. After all, membership of unions is at an all-time low and public support for them does not fare much better. Moreover, support for unions ordinarily falls when unemployment rises. But these are no ordinary times. For if organised labour has fallen out of favour, the illusion that you can make it on your own is not far behind. A Pew survey in 2008 – before the banking system imploded – showed that fewer Americans than at any time in 50 years thought they were moving forward in life. The number of those who don't believe you can get ahead by working hard has doubled in 10 years. Half the country thinks its best days are behind it. While many may question the role of the unions, few believe firing 12,000 government workers, as Walker has pledged to do, is the answer.

Walker's case is as predictable as it is weak. Government workers, he claims, have higher pay and better benefits than others in a bloated state that must slim down if it is to keep running. This is hardly true. Accounting for age and education, US local government employees earn 4% less than their private sector counterparts. Yes, the shortfall in pensions is real. But if the political will existed, calamity could be avoided with a fairly modest increase in the budget allocation. Union members do generally enjoy better benefits. That's the whole point of being in a union: to improve your living standards through collective action. And that is precisely why Republicans like Walker want to crush them.

His agenda has nothing to do with redressing a fiscal imbalance and everything to do with exploiting the crisis to deliver a killer blow to organised labour. If fixing the budget deficit were really Walker's priority, he would not have waved through $140m in tax breaks for multinationals or refused to take federal funds for transport or broadband development. Like 10 other states, he might even have raised taxes progressively.

None of these contradictions are particular to Wisconsin. Similar stories could be told as far away as Ireland and as nearby as Indiana, where Democrats also fled the state to defeat a union-bashing bill. Nor are they coming exclusively from the hard right. Democrats in the US and social democrats around Europe are attacking unions too, albeit with less relish. What Wisconsin does offer is a transparent illustration of the ideological sophistry and political mendacity driving these attacks.

But having started this fight in such a brazen manner, Walker has little option but to pursue it to its bitter end. That is why it has taken on national significance. Faced with an existential threat, the labour movement has broadened its horizons and galvanised a pluralistic, national opposition. That is a precondition for success but by no means a guarantee.

Last weekend's demonstrations do not necessarily reflect a new sense of class consciousness, but they do suggest the potential for it. The idea of a class system where only a handful can ever be truly wealthy intrudes awkwardly on a culture rooted in notions of self-advancement, personal reinvention and rugged individualism, even if it is closer to reality. Old habits die hard. The weekend protests were organised under the banner "Save the American Dream".

Democratic politicians, funded by both unions and corporations, pretend not to take sides, casting the national conversation not in terms of bosses and workers or wages and profits but of rich and poor.

The problem with this, explains Michael Zweig, the director of the centre for the study of working-class life at the State University of New York, is that "most people want to be rich and most of them don't know what rich is. If you put class in terms of power, you start to get to the source of the problem."

Leaders like Walker are making it clear which side of the class divide they stand on. A growing number of Americans, it seems, have begun to understand that this is precisely the problem and are discovering the source of their own power.