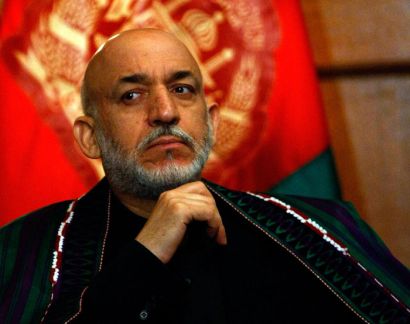 President Hamid Karzai: Did some in the ISI want him dead?

In July and August 2008, the Afghan National Directorate of Security (NDS) passed information to the U.S. that three Pakistan-trained militants, plotting to kill President Karzai, had been groomed by a named officer of Pakistan’s Inter-Services Intelligence (ISI), and had trained at a camp in Zarb-i-Momin outside Karachi. The attackers, Palestinians and Arabs, intended to strike during a Kabul mosque visit by Karzai, or during a visit to the luxury Serena Hotel.

The files, compiled by mostly junior officers based on informants and Afghan officials, reveal that Pakistan aided militants, despite supporting the U.S. war on terrorism. According to the files, NATO is concerned about Pakistan double-dealing, and data that indicates how ISI officials attend meetings of the Taliban and issue orders to militants. The documents report that al-Qaeda, the Taliban and General Gul plotted to kill President Karzai; and that an ISI officer, Colonel Muhammad Yousaf, directed Taliban leader Maulvi Ezatullah to supervise the assassination plot in August 2008.

According to the memos, the Taliban are guided in their attacks on Afghan and NATO forces from Pakistan, which is a safe haven for militants. They reveal that Arabs, Chechens, Pakistanis, and Muslims from European states sneak into Afghanistan from Pakistan to fight NATO and Afghan troops. Gul has also been accused of re-organizing Afghanistan's second-largest militant group, Hizb-i-Islami, led by Gulbuddin Hekmatyar, and the Haqqani Network, a Waziristan-based rebel outfit.

Mr. Gul allegedly visited Waziristan in January 2008 to devise a plan to avenge the killing of Ahmad Alkani, an al-Qaeda leader killed in a U.S. drone missile strike.

He is also accused of directing Pakistani Taliban to wage a jihad in Afghanistan instead of Pakistan. The former spy chief is said to have handed over 65 vehicles full of ammunition to the Taliban. The agency he headed provided 7,000 Kalashnikov assault rifles to the fighters in Kunar, and 1,000 motorcycles to the Haqqani Network for suicide attacks in southeastern Afghanistan. The documents also link Gul to the abduction of United Nations workers on the Kabul-Nangarhar highway. But some of the most eye-popping claims come from the National Directorate of Security.

U.S. National Security Advisor General James Jones has condemned the classified disclosure by individuals and organizations, which could put the lives of Americans and their partners at risk. Since 2009, the United States and Pakistan have deepened bilateral ties, and counter-terror cooperation has led to significant blows against the al-Qaeda leadership. The United States and Pakistan have also commenced a Strategic Dialogue that has expanded cooperation on issues ranging from security to economic development. Jones went on to say that Pakistan and Afghanistan have also improved ties, most recently through the conclusion of a transit trade agreement.

Another significant point raised by the WikiLeaks intelligence leak is that the ISI played a role in terrorist attacks within Afghanistan. Presidential spokesman Wahid Omar told reporters on Monday that the Afghan government has said clearly and repeatedly that foreign interference is one of the key reasons for the instability in war-torn Afghanistan. Some Afghan analysts told Pajhwok Afghan News that the leaked information was nothing new to Afghans. Afghans say they the world should now know that Pakistan interferes in the internal affairs of Afghanistan, and that it must come to an end.

Pakistan has, however, rejected the documents released by WikiLeaks as baseless, and asserts that it has sacrificed a lot to fight the war on terror and continues to fight the terrorist menace with all of its powers.

Boy, the nutzis are blocking me a lot more today than usual. Something must be up, like killing off Iran.