When Zionists Made Deal with the Nazis 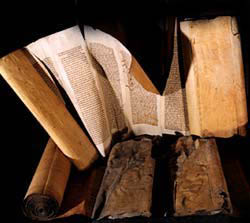 On the afternoon of August 7, 1933, at 76 Wilhelmstrasse in Berlin, on a day when well-dressed Jews in Germany could not step into the street without fear, when laboring kibbutzniks in Palestine proudly swept the midday perspiration from their foreheads, when anxious German businessmen worried the next telegram would cancel yet another order for increasingly unsellable Reich goods, when Nazi organizers throughout Europe gleefully reviewed statistics on Jewish populations and Jewish assets within their midst, when Polish blackshirts viciously beat Jews in town squares, when ordinary jobless Germans wondered where they could find enough money for the next meal, when young Jewish boys in German schools were forced to stand painfully before their classmates as examples of detestable vermin, when defiant Jews across America and England raised their fists in anger proliferating their punishing anti-German boycott, when Jewish Palestinian exporters wondered nervously whether their biggest customer, Germany, would retaliate, when thousands of homeless German Jews existed as refugees and some in concentration camps, when the prospects for Jewry in Europe seemed over, on this fateful day in the first summer of the Hitler regime, an official delegation of four German and Palestinian Zionists and one independent Palestinian businessman were ushered into an Economics Ministry conference room. The Jews had been authorized by a combine of Jewish and Zionist bodies to negotiate with the Third Reich.

After hours of wrangled debate, Hans Hartenstein, director of the Reich Office of Currency Control, was about to call the meeting to an inconclusive close when a messenger from Deutsche Reichpost delivered a telegram from the German consul in Tel Aviv. The telegram advised Hartenstein that a coalition of official and commercial Zionist interests in Palestine was the best way to break the growing Jewish-led worldwide anti-Nazi boycott that was crippling the Hitler regime in its first months. A deal with the Zionists would be necessary.

And so it was done. The Transfer Agreement was created. There was no hard-copy contract with names penned at the bottom. The agreement was actually an official Reich decree, 54/33, issued three days later, on August 10, by the Reich Economics Ministry. The decree authorized the Zionists to create two transfer clearinghouses, one under the supervision of the German Zionist Federation in Berlin, one under the supervision of Anglo-Palestine's trust company in Palestine. The office in Tel Aviv was called Haavara Trust and Transfer Office Ltd. Often called Haavara Ltd. for short, this corporation was organized under the Palestinian commercial code and operated by business managers. Its stock was wholly owned by the Anglo-Palestine Bank, which was later renamed Bank Leumi.

The bargain was this: Jews could leave Germany before being pauperized, and take some of their assets with them in the form of new German goods which the Zionist movement would then sell in Palestine and eventually throughout much of the world market. The proceeds would be given to the emigrants, with a portion reserved for state-building projects such as industrial infrastructure and land purchase.

Jews could not enter Palestine without a so-called "Capitalist Certificate" issued by the British proving they possessed the equivalent of $5,000. Transfer made this possible. Addressing more than just active emigrants, the Transfer Agreement allowed "potential emigrants" to protect their assets in these special bank accounts which again could not be accessed without purchasing and reselling German goods. Between the active and potential emigration accounts, the Transfer apparatus meant millions of reichsmarks - to both the Germans and Zionists.

The more goods the Germans sold, the more Jews would be permitted out of Germany and into Palestine, and the more money would be available to build the Jewish state. The price of this commerce-linked exodus would be the abandonment of the commercial war against Nazi Germany. The punishing, global anti-Nazi boycott that organizers loudly promised would topple the Hitler regime in its first year, this growing nonsectarian and interfaith coalition that every day was vituperatively breaking German contracts, canceling German orders and diverting German business to any Depression-era competitor who would step forward. Jews were fighting back. The Nazis had decided that this moral counterattack - one which Germany feared more than any other Jewish response - had to be stopped.

It did not matter whether the anti-Nazi boycott could have succeeded in real terms. Boycott effectiveness is not measured in dollars and pfennigs but in ergs of fear. The Germans feared the mythical international Jewish conspiracy of global economic manipulation more than any other.

The Zionists understood it. And soon the Jewish and nonsectarian boycott organizations came to grips with it. One could not save a Jew from the Nazis without selling German goods. That killed the boycott before the boycott could even begin to kill the Third Reich.

Whole branches of Jewry would wither, but the trunk would survive - Herzl's words. This one time, this crucial and unparalleled time, the Jewish emergency would be used to secure a future, not ransom a past. From this crisis of humiliation, agony and expulsion would come sanctuary, nationhood and a new Jew, with a new home to call his own. In its various public and private forms, the Transfer Agreement shifted some 60,000 Jews and $100 million - almost $1.7 billion in 2009 dollars - to Jewish Palestine. Ultimately, the Transfer Agreement saved lives, rescued assets and seeded the infrastructure of the Jewish state to be.

DURING THE prewar years, the Transfer Agreement tore the Jewish world apart, turning leader against leader, prompting rebellion and even assassination within the Yishuv and Diaspora alike. Jewish Agency de-facto foreign minister Haim Arlosoroff, who had negotiated the deal on behalf of the Zionist Mapai Party, was assassinated on an empty stretch of the Tel Aviv beach (near where the Tel Aviv Hilton now stands), presumably by Revisionist Zionists of the Ze'ev Jabotinsky camp. The Revisionist Zionists, a minority at the time, violently opposed the deal with the Nazis. Today streets everywhere in Israel are named for Arlosoroff.

American Jewish leaders and organizations such as the American Jewish Congress and Stephen Wise - choosing the Zionist solution - were forever soul-torn by the decision to abandon the organized and cohesive boycott against the Nazis. Official Jewry left the protest war to a ragtag, disorganized but ardent movement devoid of support where it counted. However, without the boycott, there would have never been a Transfer Agreement.

Despite the searing communal outrage, as the situation for Jews in Europe worsened, variations on the same German transfer arrangement were readied by Zionists for Czechoslovakia, Hungary and other Nazi-occupied or dominated countries. Then, when war erupted, when dispossession turned to annihilation, the Transfer was used to rescue whatever and whoever could be rescued. The debate disappeared. However, by that time, the Transfer Agreement had been curtailed or terminated in most respects.

For almost three decades, the Transfer Agreement and the anguished details surrounding it were forgotten. Finally, in 1984, when the full story became known with the original publication of The Transfer Agreement, the book launched a fiery debate, a debate few were prepared to comprehend. Back then, the world and the Jewish community were still confronting the genocide, the survivors and the guilty.

The world's emphasis was on the murderous events of the war years. Organized remembrance was collectively fighting an anti-Semitic revisionist movement that was trying to deny or minimize the Holocaust with rabid pseudo-history. Few, especially in the English-speaking world, had publicly spoken in detail about the financial aspects of the Holocaust until the book's publication. Few had used the words "Zionist" and "Nazi" in the same sentence until this book did.

For perspective, consider that the very first television attempt to treat the Holocaust was a TV series called The Holocaust, which aired in 1978 - the same year neo-Nazis marched through Skokie, Illinois, a Chicago suburb. That was the year, 1978, research began on The Transfer Agreement. At the time, the Second Generation movement of children of Holocaust survivors was just forming. The First World Gathering of Holocaust Survivors was only in the planning stage. The US Holocaust Memorial Museum, which received its charter in 1980, was several years and many controversies away from opening. Organized Holocaust education was essentially nonexistent. For society and for survivors, the dominant priority was coming to grips with the genocide - not the assets.

Today, society understands most of the outward manifestations of what happened. Now the world has turned almost entirely to other more worldly questions: assets.

As such, it places the Transfer Agreement at the forefront. While international efforts continue to recover lost Jewish assets, the Transfer Agreement stands alone as the sole asset rescue that actually worked. And it worked contemporaneously, not with the benefit of hindsight, not lubricated by the after-tears of devastation but in the hellish frenzy of the Nazified day as Zionist leaders looked over their shoulder to remember the past and up to the heavens to envision the future. They remembered and reminded their contemporaries that even Moses was commanded by God to take the sheep and goats. In that context, the world can examine the enormous task facing the Zionist negotiators of 1933 and the monumental arrangements they sealed.

A few coldly realistic Zionist leaders in an office on Wilhelmstrasse were willing to make those decisions. It helped save a people. It helped create a state. Nonetheless, 25 years after the book was published and more than 75 years after the deal was negotiated, the nagging questions still haunts all those who confront the Transfer Agreement. Was it madness? Or was it genius?

The writer is the award-winning best-selling author of IBM and the Holocaust, and his first book, The Transfer Agreement, has now been rereleased in a 25th anniversary edition (Dialog Press), with an afterword by Abraham Foxman. www.edwinblack.com