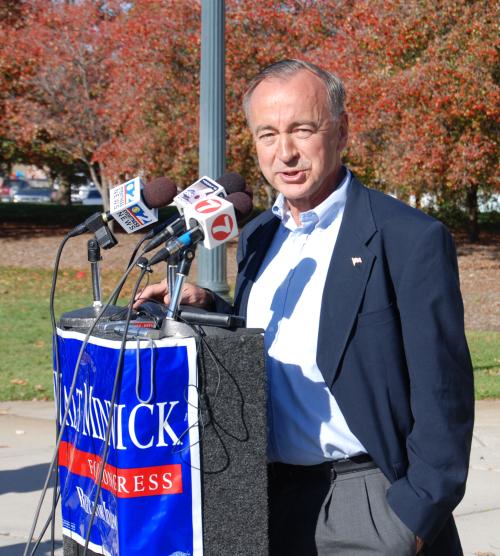 The day Walt Minnick decided to resign from Richard Nixon’s White House was the defining moment in his life. As he’s always told it, it was Sunday, Oct. 21, 1973, the day after two attorneys general resigned after Nixon ordered them to fire a special prosecutor. Minnick decided to quit the administration, give up practicing law, return to the West and go into business. He walked in with his resignation letter the next morning.

The decision led the Walla Walla, Wash., native to Boise, where he would have a successful run as chief executive officer of Trus Joist and eventually become a Democratic member of Congress. But his official biographies leave out the fact that he stayed on in the White House to continue his efforts to establish the Drug Enforcement Administration and lead the administration’s international anti-drug programs until Jan. 14, 1974.

Minnick didn’t hide his delayed departure when interviewed by the Idaho Statesman about it in 2008. But two Idaho Democratic bloggers, fed up with Minnick’s conservative voting record, are challenging Minnick’s resignation motives in a 6,000-word polemic that cites at least 45 documents found online and in public and private archives.

“It’s not clear when Minnick actually decided to resign, let alone whether he ‘resigned in protest,’ “wrote Tara Rowe and anonymous blogger “Mountain Goat.” “But if he was protesting, it wasn’t very loudly.”

They even suggest he was a member of the special investigations unit, the so-called “Plumbers Unit,” that targeted the man who leaked Pentagon secrets to the New York Times and later broke into Democratic Watergate headquarters — events that led to the cover-up that forced Nixon to resign in 1974.

The two bloggers are up-front about their motives. Their painstakingly researched piece is, they say, “as much a response to (Minnick’s) vote … against health care reform as it is a manifestation of a deep-seated frustration with the repercussions of his election on Democratic politics statewide.”

Some of his backers — and even Minnick himself — believe that the sophisticated backgrounding must have come from Republican “opposition research.”

That’s an intense, professional and often ruthless exploration of a candidate’s history routinely employed by campaigns from both parties. The Watergate information, Minnick and others say, most likely came from when Minnick challenged then-powerful Idaho Sen. Larry Craig in 1996.

Craig said Saturday he did share his research with Minnick’s 2008 opponent, conservative GOP Rep. Bill Sali, but to his knowledge it was not shared with the two Democratic bloggers.

The bloggers say they did all the research themselves. Minnick’s theory about Republican sources may underestimate some of the frustrations Democrats have with Minnick, ranked by Congressional Quarterly last summer as the most likely Democrat to vote against his party’s majority. He was the only Democrat nationwide recently endorsed by one of the most prominent national tea party groups.

WALKING AWAY FROM THE WHITE HOUSE

When he decided to leave the Nixon White House, Minnick didn’t protest publicly. He quietly handed in his resignation letter and agreed to stay on to smooth the transition of drug programs to his successor.

But his resignation was based on his conscience, say White House officials who served with him. His decision to stay on was just as principled an act as his resignation, said Geoffrey Shepard, the Harvard Law School colleague who helped bring Minnick to the White House in 1971.

“The effort to combat the flow of international narcotics was very important, and Walt was in charge of it,” Shepard said. “He had a right to resign, but he didn’t have the right to leave it in the lurch.”

Minnick’s time with Nixon has long been scrutinized, first by special prosecutors — who gave him a clean bill of health — and later by the researchers for Craig and Sali, the one-term conservative Minnick unseated in 2008. This is the first time, though, that Minnick’s White House record has been challenged from the left.

Rowe is a historian from Pocatello who’s blogged since she was a student at Idaho State University. She catalogued for ISU the official papers of Richard Stallings, the last Democratic congressman from Idaho, who served four terms in eastern Idaho’s 2nd District.

Mountain Goat, a Canyon County Democrat, has blogged anonymously — in part because she’s gay. After a face-to-face interview, the Statesman agreed to leave her identity out of the story, in part because Rowe put her name to the Minnick research and the anonymous blogger’s account is consistent with Rowe’s explanation of their research and motives.

The two researched Minnick’s life for six months before deciding to publish it in March — right after Minnick voted against Obama’s health care reform bill.

“He has shown no interest in convincing moderates and independents that Democratic values are Idaho values and can make a difference in their lives,” they wrote. “He’s simply been trying to convince as many as will listen that he’s not like other Democrats. That may be good strategy for Walt Minnick but it hasn’t been good for Idaho Democrats.”

In their alternative biography, they dismiss Minnick’s roots as a wheat farmer because his father also was a prominent lawyer. They challenge his service during Vietnam. Minnick’s campaign website says he was a “1st lieutenant in the U.S. Army during the Vietnam War.” The bloggers say that he won an appeal to defer his draft after being admitted to Harvard Law School, and he spent only a short time as an economic analyst in the Pentagon.

“Walt was afforded benefits few others at the time enjoyed, including an elite education and draft deferments, that eventually took him all the way to the White House,” they wrote.

Shepard, who first met Minnick in law school, said he was a gifted student who worked hard and could have gotten out of his obligation for military service but chose to honor it anyway. Shepard went directly to the White House while Minnick went to the Pentagon.

ROOMING NEAR ‘PLUMBERS’ HUNT AND LIDDY

In 1971, when Shepard was a staff assistant to Nixon’s Domestic Policy Chief John Ehrlichman, he persuaded Minnick, still an Army lieutenant, to apply for a job working on drug issues.

Minnick was hired and placed under Krogh, who ran drug programs and the plumbers.

There was no office space immediately available except a conference room in the offices of the Special Investigation Unit, which was then looking into the leak of the Pentagon Papers to the New York Times by Daniel Ellsberg. Minnick briefly had an office next to G. Gordon Liddy and E. Howard Hunt — the two men who were to become central to one of the biggest political scandals in American history.

Both plumbers, who masterminded the break-in at the Democratic headquarters in the Watergate Hotel, were later convicted for breaking into Ellsberg’s psychiatrist’s office.

Minnick got to know both men. He described Liddy, a former FBI agent, as “gregarious and self-important.” Hunt, a former CIA agent, was “very reserved, very professional. He wasn’t very happy I was there.”

“Occasionally, Liddy would say a half word too much, but I knew what they were doing just like everybody knew,” Minnick said.

In documents obtained through the Freedom of Information Act, the two Idaho bloggers found what Minnick told Department of Justice investigators on Oct. 12, 1973: He said he overheard the plumbers discussing Ellsberg, that they would be able to prosecute him for leaking the Pentagon Papers and that they wanted to “nail Ellsberg in a vindictive sense.”

Minnick soon moved into an office next to Shepard and became the staff assistant of the Cabinet Committee on International Narcotics Control. He spent the next two years traveling around the world to enlist other countries in the Nixon administration’s “war on drugs.”

He became Nixon’s top aide on drugs and often briefed the president directly. But as the Watergate scandal grew after Nixon’s 1972 re-election, Minnick became troubled, he said.

In January 1973, Hunt and Liddy were convicted for the break-ins. In March, Nixon’s chief counsel John Dean cooperated with prosecutors; in June, Dean testified before Congress that Nixon was aware of the break-in and was involved in covering it up.

Nixon fired Dean and Chief of Staff H.R. Haldeman. Ehrlichman resigned when the top aides’ roles in the break-in were made public. Minnick’s old boss Krogh was indicted for perjury Oct. 11.

John Andrews, then a speech writer for Nixon, was becoming disillusioned with the president on moral and spiritual grounds, Minnick said. They would talk at lunch about their concerns.

“He said, ‘What the president has done is inconsistent with my faith,'” Minnick recalled.

Andrews, a Republican who served as the president of the Colorado Senate and is now a conservative talk-show host, was the only Nixon staffer to publicly resign in protest.

He remembered Minnick, though he didn’t know him well.

“Though I don’t recall the details of our conversations, we did agonize together about Nixon’s failure of moral leadership,” Andrews said.

Minnick’s day of decision came after the so-called “Saturday Night Massacre,” when Nixon fired Attorney General Eliot Richardson and his deputy William Ruckelshaus when they refused to fire special prosecutor Archibald Cox. Minnick had been the last staffer to meet with Richardson as they prepared for a meeting about drug policies and police corruption with Mexico’s attorney general.

As he went into the White House on Sunday to finish the briefing booklet for Richardson, he heard about the firings on the radio.

“I thought, ‘John Andrews was right. I can’t work for this (expletive deleted),'” Minnick said in an interview. “So I went into the office and took the briefing book and threw it into the wastebasket.

“I wrote a letter of resignation to (Office of Management and Budget Director) Roy Ash. It was handwritten, and I took it over to him the next morning.”

Rowe said she was unable to find a copy of that letter in the Nixon Presidential Papers. She found records that Minnick remained on the job until January 1974.

Minnick said he told Ash he would stay on while they found a new man to head the drug programs. Shepard remembers talking to Minnick at the time.

“He said, ‘I can’t in good conscience be on this team anymore,'” Shepard said.

DEAN SAYS MINNICK WAS NO PLUMBER

Rowe based her assertion that Minnick was a member of the Plumbers Unit on journalists’ reports on statements from Hunt and Dean and on Hunt’s own book.

But Dean told the Statesman that his understanding is that Minnick told investigators that while he roomed with Hunt and Liddy, he was not a member of the plumbers.

“He would be in a heap of trouble if he hadn’t squared it with them,” Dean said.

Dean rode with Minnick to the Camp David presidential retreat early in 1973 in an incident Dean wrote about in his book “Blind Ambition.” Dean was going to share a tape of Hunt’s demands for money with Haldeman and Ehrlichman; Minnick was going there for drug meetings.

“In the dealings I had with Minnick he was a straight shooter,” Dean said.

Both Shepard and Krogh have remained close friends of Minnick and have given money to his campaign. Dean and Andrews have not had much contact with Minnick over the years.

As for Hunt’s assertions of Minnick’s connection to the plumbers, Shepard believes the old spy, now dead, based them on Minnick’s short stay in the office. Minnick himself has always denied being a plumber.

“Hunt was simply wrong: There was — and is — absolutely no basis for Hunt’s assertion,” Shepard said.

Rowe still wonders why Hunt identified Minnick as a plumber twice, once in his book and once in testimony before Congress.

“I don’t give Hunt much credibility,” she said. “But he’s not here to defend himself.”