"... What he calls a 'conspiracy' is more a threat to the future of the big oil and gas companies that have been the most generous contributors to Mr. Inhofe's re-election campaigns. ..."

People who voted for the GOP in the congressional elections this week may be surprised to learn they chose a militant climate change denier to oversee federal efforts to deal with climate change. The widespread expectation is that, when Republicans take charge of the U.S. Senate in January, Oklahoma Sen. Jim Inhofe, a vehement foe of those who believe human exploitation of fossil fuels is contributing to a sharp rise in global temperatures, will be chairman of the Environment and Public Works Committee.

Exit polls taken during Tuesday's vote indicated that this year's electorate leaned conservative and that their top two desires were smaller government and a healthier economy. Mr.  Inhofe would probably argue that halting efforts to deal with climate change would contribute to both goals, but, besides being wrong, his remedy may not be what many of those voters had in mind.

What were the voters saying? Conservatives have been expressing their wish for less government for years but, no matter who gets elected, Republican or Democrat, the federal government remains huge. And that is because, when it comes down to cutting the big stuff, there is not much that even conservatives want to do without. Besides the massively expensive right-wing sacred cow of defense, the two biggest pieces of government are Social Security and Medicare and those are dear to all the older voters who vote Republican.

What a push for smaller government usually comes down to is cutting food stamps for the poor and eliminating regulations for the rich. The former, while making life more miserable for folks at the low end of the economic scale, does not make a very big dent in the federal budget. The latter, while further enriching corporations, banks and Wall Street firms and freeing them to pollute the environment and come up with new, risky ways to manipulate the stock market, has not been proven to extend the benefits of a booming economy to the middle class. 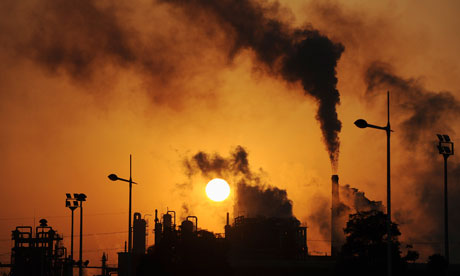 Surely voters are hoping for more than that, but it is not always easy to know since a lot of people contradict themselves with their ballots. At the same moment voters were giving the Senate to the GOP and choosing a batch of new Republican governors, some were also voting to raise the minimum wage. This happened in five states -- Alaska, Arkansas, Nebraska, South Dakota and Illinois -- where Democrats were being dumped in favor of Republicans, even though pro-business Republicans have blocked a federal minimum wage hike for years.

Voters do not always think about these contradictions, and they certainly don't spend time wondering how their vote will affect individual committee assignments in the Senate. But those obscure, small results are usually more tangible than all the noisy promises about improving the economy. Entrusting Jim Inhofe with climate change policy is one good example.

Mr. Inhofe answers the worldwide scientific consensus that climate change is already responsible for melting glaciers and extreme weather with reassuring passages from Genesis. Contrary to the ominous research-based predictions of climatologists, the senator insists a warming planet might, in fact, be a good thing. Summing up all his skepticism and paranoia, Inhofe published a book in 2012, "The Greatest Hoax: How the Global Warming Conspiracy Threatens your Future."

Actually, what he calls a "conspiracy" is more a threat to the future of the big oil and gas companies that have been the most generous contributors to Mr. Inhofe's re-election campaigns. As far as actual danger, there are few places in the country more in peril than Mr. Inhofe's Oklahoma and the lower Great Plains. Record temperatures, drought and water depletion are already big problems in the region. If climate scientists are correct and the current crisis is just a hint of worse days to come, one would think Mr. Inhofe might want to open his mind to the possibility he could be wrong about how wonderful climate change is going to be for his constituents.

Don't expect it, though. He's got books to sell, big donors to please and a committee chairmanship he can use to block any small effort to deal with what some consider an existential threat to the nation and the human race. No matter what they may have thought they were doing in the voting booths on November 4, what voters did was put Jim Inhofe in charge of the future of the world.

Not Backing Down: Coburn Outlines Opposition to 9/11 Health Bill