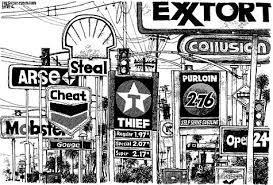 WASHINGTON, Sept. 27 (UPI) — An advocacy group said it was frustrated by the level of influence the private oil and natural gas industry has on U.S. policymakers.

Oil Change International, a group scrutinizing the  industry, said North American oil and natural gas companies reported a combined $271 billion in profits last year. It said a “huge share” of the overall profits can’t be accounted for, however, because private companies aren’t required to disclose their financial information.

“Fossil fuel industry lobbying expenditure and contributions to the U.S. Congress amounted to over $536 million in the 112th Congress [2011-12],” it said in a statement Thursday.

The New York Times reported Thursday members of the U.S. House of Representatives offered a “legislative Christmas tree” to lawmakers debating a measure to prevent the government from defaulting on its debt obligations by mid-October.

Supporters of more energy development say it would help the economy. Oil Change International said campaign financing from the energy sector “ensures that U.S. politicians represent the fossil fuel industry’s interests above those of the people that elected them.”