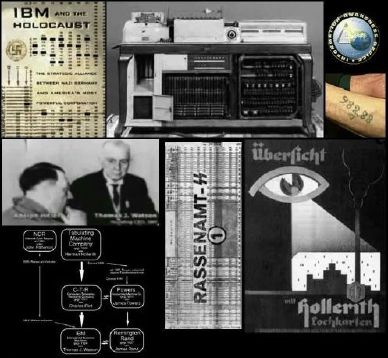 ... The US giant IBM, which made computers that worked mechanically using punch cards, supplied vast quantities of hardware and software to Adolf Hitler's Nazi regime from 1933 to 1945.

Most of what we know about this was dug up by the investigative journalist Edwin Black for his book, 'IBM & the Holocaust'.

He says he was visiting the Holocaust Museum in Washington when he saw an IBM device and no-one could tell him about its role.

I asked Edwin Black what his investigations eventually turned up.

EDWIN BLACK: That IBM directly under the micro-management of its president Thomas J. Watson in New York and through other subsidiaries, consciously co-planned and co-organised all six phases of the Holocaust from 1933 to the last months of 1945.

Most people do not understand that the Auschwitz tattoo began as an IBM number.

MARK COLVIN: Looking from this perspective, it's hard to imagine that you could get any real computing power with a bunch of punch cards.

And so it was IBM under Watson's personal supervision that undertook to do a national census to identify the Jews and they punched in, for example, the city in one column, the religion in another column, the national origin in a third column, in a fourth column the mother tongue, in a fifth column, the profession.

And at the rate of 60,000 cards per hour they could identify bang, exactly all the Jews in Berlin of eastern extraction who had engaged in the fur trade. Once they were identified they could then be excluded from all the organisations. The banks all ran on IBM punch cards and so their assets could be seized.

Eventually when it came time to moving the Jews into ghettos, one day everybody picked up from their comfortable home and were moved across town into slums in tiny dilapidated quarters, everybody knew their street address, they knew their apartment, they knew what floor to go, they knew which stairway.

MARK COLVIN: You seem to be talking about the early stages of it?

EDWIN BLACK: I'm talking about the early stage was identification.

EDWIN BLACK: That was '33, '34, '35 but they were constantly identifying not only the Jews of Germany but the Jews of Poland; wherever they went in they were able to identify the Jews by these technologies.

MARK COLVIN: So after the war starts, then they start bringing machines with them.

EDWIN BLACK: That is right. In fact IBM consciously moved in cadence with the Nazi takeover of Europe. For example, they organised the rape of Poland when the Nazis perpetrated the Blitzkrieg using General Motors trucks, the Blitz truck, IBM went in right with them and established a special Nazi subsidiary called Watson Business Machines and they organised the starvation of the Jews through statistical methodologies.

Eventually they set up a train system that would send the Jews efficiently to Auschwitz. There was an IBM customer site in virtually every concentration camp.

MARK COLVIN: Did they know about the gas?

EDWIN BLACK: Of course they knew about the gas. IBM devised a system by which Jews could be … the manner of death could be identified. They had one code for suicide, one code for execution and they had a special code, Sonderbehandlung - gas chamber.

That meant that IBM engineers had to design this card, it had to be printed up, the machines had to be set, the individuals had to be trained and remember; these machines needed to be maintained and serviced every two weeks, whether that was in downtown Berlin, in the Hollerith Bunker across the main gate from Dachau or in Auschwitz, just near the IG Farben factory.

MARK COLVIN: Now a lot of people would know for instance that Henry Ford was an admirer of Hitler but Thomas Watson, who's heard of him?

EDWIN BLACK: Well everybody in the United States has heard of Thomas Watson. There are Thomas Watson research centres from IBM. They just rolled out a game show, a Jeopardy computer.

MARK COLVIN: What I'm asking is why isn't it better known that he and IBM were so complicit?

EDWIN BLACK: Well IBM has done everything it can to suppress the information or to be non-responsive.

EDWIN BLACK: For instance, for years, for some 10 years major community leaders and journalists have been asking IBM for a response and IBM's response is - we don't have much information about the period, we just don't remember.

And the fact of the matter is they should take a cue from their Nazi clients; apologise, fess up and move on with the future at hand.

MARK COLVIN: What do you think people should do about it?

EDWIN BLACK: Many people ask me if we should boycott IBM.

MARK COLVIN: It would be pretty difficult to do wouldn't it?

EDWIN BLACK: It would be impossible to do, I don't recommend it.

MARK COLVIN: There may be an IBM computer buzzing away in the bowels of this building for all I know.

EDWIN BLACK: Well all of my computers are IBM, they're deadly accurate and I use them.

MARK COLVIN: Edwin Black, author of 'IBM & the Holocaust'. You can hear a longer version of that interview with more detail and more discussion about the use of computing now on our website from this evening.

Edwin Black is teaching courses at the Shalom Institute at the University of New south Wales and he'll be talking about 'IBM and the Holocaust' in Melbourne on June the 2nd at Monash University.