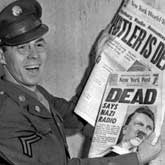 (Sept. 28) - New DNA tests show that a skull long thought to be Adolf Hitler's is not his after all. Scientists at the University of Connecticut conducted tests on the bullet-pierced skull -- which had been secretly preserved for decades by Soviet intelligence -- and discovered that it belonged to an unidentified woman under 40, the British newspaper The Guardian reported Sunday.

The results cast doubt on the long-held account that the Nazi dictator swallowed a cyanide pill and then committed suicide in his Berlin bunker as Allied forces were closing in on him in 1945. The story of the testing was also reported in a History Channel documentary, "Hitler's Escape."

University of Connecticut archaeologist and bone specialist Nick Bellantoni knew from the outset that something was amiss. "The bone seemed very thin; male bone tends to be more robust," he said. "And the sutures where the skull plates come together seemed to correspond to someone under 40." Hitler had turned 56 in 1945.

Bellantoni had flown to Moscow to inspect the skull and was given one hour to take DNA samples. The testing was conducted in Connecticut.

According to the Guardian, the skull fragment was the only positive physical proof that Hitler had shot himself. So who does the skull belong to?

According to witnesses, Hitler committed suicide with his mistress Eva Braun. Their bodies were then wrapped in blankets and carried to a bomb crater outside the Berlin bunker, doused with gas and set on fire. But Bellantoni doesn't think the skull belongs to her.

"There is no report of Eva Braun having shot herself or having been shot afterwards. It could be anyone. Many people were killed around the bunker area," he said.