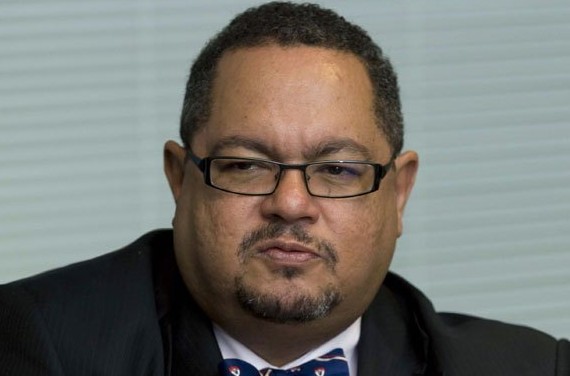 From humble beginnings in his native Sierra Leone, Arthur Porter quickly — inexplicably, some say — became part of Canada’s business and political establishment. A medical doctor, he was named Canada’s top spy watchdog two years ago, giving him direct access to state secrets. He was made a member of the Privy Council. As a director on the board of Air Canada, he travelled the world free of charge. He led the McGill University Health Centre (MUHC), one of this country’s largest public health-care providers.

But his credibility was called into question last year. A National Post investigation exposed curious business activities and relationships. Dr. Porter resigned from his prestigious positions and left the country. According to court proceedings brought against him this month by McGill University, Dr. Porter is “now of unknown address.”

In fact, further investigation by the National Post reveals Dr. Porter has his hands full in the Bahamas, advising its national government and promoting an assortment of new business ventures. These include a private cancer-treatment company that he runs with another entrepreneurial doctor, someone with ties to Libya’s fallen Gaddafi regime.

Like Dr. Porter, Karol Sikora is a British-trained oncologist, and no stranger to controversy. Dr. Sikora has an abiding interest in alternative medicine, and is known for his vehement criticism of public heath-care systems. In 2009, Dr. Sikora allegedly misled the British public by claiming to hold an honorary professorship at a large medical school in London. “This individual has been warned before by the college for making claims that he is employed by us, or associated with us,” an official with Imperial College London told The Guardian newspaper.

But Dr. Sikora is most notorious for his ties to Saif Gaddafi, son of the late Libyan dictator Muammar Gaddafi.

Three years ago, the Libyan regime retained Dr. Sikora to provide an opinion on the medical condition of Abdel Baset-al Megrahi, a terrorist convicted of 270 counts of murder for the 1988 bombing of Pan Am Flight 103, over Lockerbie, Scotland. Megrahi had been sentenced to life in prison in 2001, and had developed prostate cancer. The Gaddafi regime sought to have him released on compassionate grounds. Dr. Sikora was approached.

“It all began with an unannounced visit to my office by a shadowy but charming fixer who floated between London, Tripoli and Washington,” Dr. Sikora recalled, in a Wall Street Journal essay published earlier this year. “Offering my advice on Megrahi’s condition seemed a fairly routine task. It seemed reasonable for the Libyans to know how strong their case was for arguing for Megrahi’s compassionate release. I explained my strategy over tea with Saif Gadhafi, son of the late dictator, in the Park Lane Intercontinental Hotel in London.” 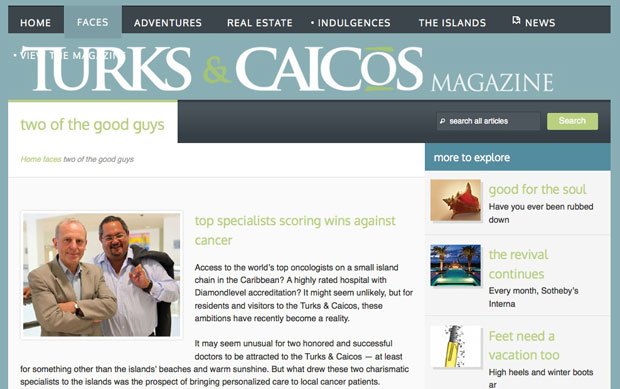 Arthur Porter and Prof. Karol Sikora are shown on the website of the Turks & Caicos Magazine website.

Dr. Sikora examined the mass murderer in Scotland’s Greenock prison, and determined that, “on the balance of probability,” he had only three months to live. The Scottish government decided to release Megrahi from custody on compassionate grounds and he immediately returned to Libya, where he was given a hero’s welcome. He lived another three years.

In the United Kingdom, Dr. Sikora was pilloried for his role in helping the terrorist obtain years of freedom, on grounds that he was on death’s doorstep. “I feel very sorry for any distress the role of the various doctors’ opinions, including mine, may have caused to the families of the victims of the Lockerbie bombings,” he wrote in the Wall Street Journal. “This sad episode has taught me to be even more cautious than before — unusually good things can sometimes happen to cancer patients.”

He’s been travelling around the Caribbean with Dr. Sikora in recent days, offering free cancer lectures and touting their company, CancerPartners UK, which operates five private treatment centres in Great Britain. Dr. Sikora is a company founder and its medical director. Dr. Porter is chairman.

On a recent stop in the Turks and Caicos Islands, the pair announced plans to offer private cancer treatment in a local hospital. The two doctors already run a cancer centre in Nassau, located a few kilometres from Dr. Porter’s home in Old Fort Bay, an exclusive waterfront community where houses are priced in the millions of dollars.

The Cancer Centre Bahamas is described on its website “as part” of a larger, private health centre, the Medical Pavilion Bahamas. These are all “headed” by local cardiologist Conville Brown, the website says.

Dr. Brown has plans to build a new “stem cell manufacturing facility” at The Medical Pavilion. Stem cell research and treatment — which may help in the fight against degenerative diseases — are contentious, and are tightly controlled and restricted in countries such as Canada and the United States.

According to a local newspaper report, The Medical Pavilion’s new stem cell facility will allow foreign patients “to come to the Bahamas, have their blood drawn, have their cells processed, administered all under one roof and then fly back home.” 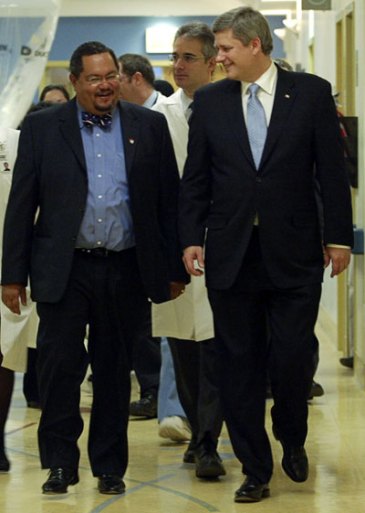 John Mahoney/Postmedia News files – Dr. Arthur Porter, then head of the McGill University Health Centre, with Prime Minister Stephen Harper during a visit to the Montreal General Hospital in 2006..

Indeed, Dr. Brown has already provided stem cell treatment to at least one foreign patient. “On the medical tourism side, it allows us in the Bahamas to provide a service to people from outside of the country [who] couldn’t have accessed that service where they come from,” he told the The Tribune newspaper recently.

Meanwhile, the government of the Bahamas has just appointed Arthur Porter as chairman of a National Task Force on Stem Cell Therapy Treatment. Unveiled in Nassau two weeks ago, the task force is to develop a strategy that may recommend the use of human embryonic stem cells in the Bahamas, paving the way for stem cell tourism.

The National Post was able to reach Dr. Porter in the Bahamas, via email, but he did not respond to a series of questions about his relationship with Dr. Sikora, Dr. Brown and his stem cell work. A former McGill bioethicist who studies medical tourism and stem cell procedures, however, says that Dr. Porter’s position at The Medical Pavilion, combined with his new role as national stem cell task force chairman, puts Dr. Porter in “a clear conflict of interest.”

“One of the main beneficiaries of whatever policy is promoted” by the stem cell task force will be the facility he shares with Dr. Brown, says Leigh Turner, a professor at the University of Minnesota Center for Bioethics. “That means Porter, as chair of the stem cell task force, is ideally suited to advance the financial interests” of his business associate. It is to Dr. Porter’s discredit that he likely is going to play a leading part in making Bahamas a destination for what I suspect will be desperate yet seriously ill patients seeking clinically unproven stem cell interventions,” Prof. Turner says.

In an email sent to the National Post on Friday, Dr. Brown suggested there was no conflict of interest, and said that Dr. Porter and the Cancer Centre Bahamas are merely his tenants.

This isn’t the first time that Dr. Porter has been accused of a conflict of interest. Last year, the National Post revealed that he had entered into a questionable business arrangement with a notorious international consultant named Ari Ben-Menashe. In 2010, Dr. Porter wired Mr. Ben-Menashe $200,000 in personal funds; in exchange, Mr. Ben-Manashe was to secure a $120-million Russian aid package for a company controlled by Dr. Porter. The funds were to be spent on public infrastructure in Sierra Leone, a country beset with poverty and corruption. The deal eventually fell apart.

Three weeks after signing with Mr. Ben-Menashe, Dr. Porter was made chairman of Canada’s Security and Intelligence Review Committee (SIRC), which examines activities conducted by Canada’s spy agency, CSIS. The appointment was made by Prime Minister Stephen Harper.

Had Dr. Porter disclosed to the Prime Minister’s Office his dealings with Mr. Ben-Menashe? No one in Ottawa seemed aware of it. Nor were officials aware that he commonly represented himself as a “special advisor” to the president of Sierra Leone, and as an “ambassador plenipotentiary” for that country — a rare designation, defined as someone who has the authority to represent a head of state.

“That is a complete conflict of interest and it raises the spectre of the potential for foreign influence in Canadian affairs — sensitive Canadian affairs,” Wesley Wark, a specialist in the history of intelligence services and national security policy at the University of Toronto, said last year. “The simple fact that someone is on the one hand serving in a very sensitive Canadian position, and on the other hand holds an appointment — however honorific — for a foreign government, is just not ‘on.’ ”

McGill University — separate from MUHC — immediately asked for repayment of a $500,000 housing loan it had made to him. He “reimbursed the amount of $214,409.60,” according to court documents. But he left Montreal without repaying the rest. Earlier this year, Dr. Porter stepped down from Air Canada’s board.

In September, anti-corruption police in Quebec raided the MUHC headquarters. They were looking for information about the manner in which the organization, under Dr. Porter’s management, had awarded a $1.3-billion hospital and construction contract to SNC-Lavalin Inc.

McGill finally received word from Dr. Porter in late October. He sent the school’s assistant vice-president of financial services a brief email, in which he claimed to be the victim of a “malicious witch hunt,” adding that he was “heading back [to Sierra Leone] and will make arrangements to pay off the loan from there from one of our family businesses.” But the funds still didn’t materialize.

McGill has requested that Dr. Porter also return $30,131.63 in salary, “paid to him after his resignation and to which he was not entitled.”

Curiously, numerous profiles and biographies circulating on websites belonging to companies with which he’s attached still identify Dr. Porter as the MUHC’s director general, chairman of SIRC, and an Air Canada director.

Responding to the National Post’s email, on Friday, Dr. Porter was willing to address the continued use of credentials. “Biosketches and biographical information released by my office is ‘time stamped’ and relevant to that date,” he wrote. “Occasionally entities or conferences may edit them. If requested we provide updated material.”

Dr. Porter attached to his email a 33-page curriculum vitae. It, too, is out of date. But there’s one boldfaced line at the top that may never be erased: “Member, Queen’s Privy Council for Canada.”

It is, the doctor notes, a “life time appointment.” 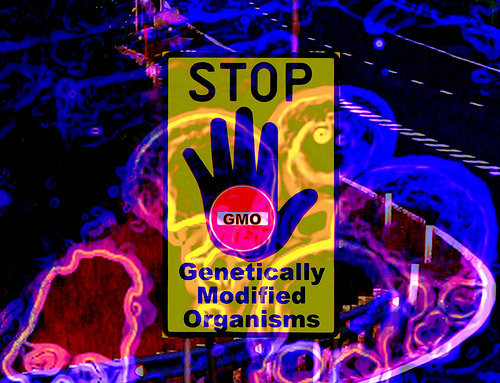