The average motorist has the details of 200 of their journeys stored on the Government’s controversial vehicle surveillance database, new figures have shown. 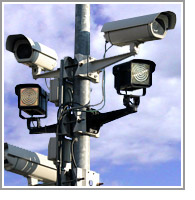 The records, which include photographs of private cars, can be secretly handed by ministers to the governments of other European countries or the United States.

The database is constantly fed pictures and details of journeys by Britain’s 38 million motorists as they drive past thousands of cameras across the country.

It was also disclosed that the records can be stored “for as long as is operationally necessary”. It was previously thought most were destroyed after a month and none was kept for more than five years.

Civil liberties campaigners last night called for the system to be scaled back and for a one-month limit on storing records. The Information Commissioner’s Office (ICO) said it was “in discussions” with chief police officers over reducing the limit.

However Nick Clegg and the Liberal Democrats, who were sharply critical of the system before joining the Coalition government, declined to comment.

ANPR was originally developed in the 1990s to monitor traffic and congestion charging. However under the Labour government it was gradually adapted for policing and anti-terrorism surveillance.

The police initially developed its own network of roadside and mobile cameras to detect stolen cars, uninsured drivers and unpaid road tax through checks against the Police National Computer.

Since then thousands of traffic and CCTV cameras in city centres, airports, petrol stations and elsewhere have been connected to the police network to combat terrorism. Police helicopters have also had the devices installed.

The newly released documents disclose that more than 4,000 cameras a week pass images and data on journey times and locations to a central computer in Hendon, north London.

The system, which is operated by Home Office officials, currently records about 14 million licence plates a day. Almost all police forces in England and Wales are connected.

In 2008 it emerged Jacqui Smith, then Home Secretary, had signed a “special certificate” allowing data to be sent outside the European Economic Area (EEA) to anti-terrorism authorities in the US and elsewhere.

Simon Davies, the director of Privacy International, described the situation as “a classic case of ‘function creep’.”

“The system was originally designed to be a traffic management system. It has quickly become a policing tool and national security device. Who knows what it will be used for next?

“The technology must be scaled down, and the period for which the data can be retained should be brought down to a month. The Government has never made a case for why it needs to be kept longer than this.”

The ICO spokesman said: “Following a complaint about the length of time ANPR data can be held, we have been in discussions with the Association of Chief Police Officers about reducing it.”

In recent years Mr Clegg has said the system “poses a threat to personal privacy”. He accused the last Government of being "happy to hand over potentially huge amounts of information on British citizens under the catch-all pretext of 'national security'."

Spokesmen for the Liberal Democrats and the Cabinet Office, both of which are led by Mr Clegg, last night declined to comment.

A spokesman for the Home Office said: "The new coalition government is very clear that it will protect civil liberties."