” … The three-and-a-half-year investigation by the Scottish Criminal Cases Review Commission (SCCRC) concluded that there were six grounds for believing Megrahi may have suffered a miscarriage of justice. … Despite the SCCRC’s continuing discussion on disclosure with the Crown Office, the Foreign Office and the police, it is difficult to avoid the conclusion that it is keen to avoid re-opening the diplomatic and political issues surrounding the Lockerbie bombing.The UK relatives seeking a public inquiry were told that was not possible while a criminal investigation was continuing. When that concluded, the Scottish Government and Foreign Office each said only the other had power to call an inquiry. … “ 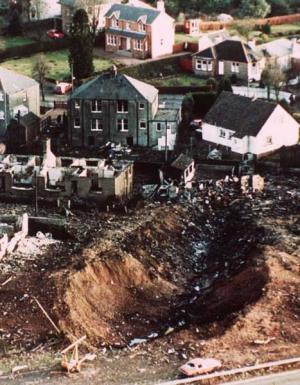 Hundreds of pages of information pinpointing why the man convicted of the Lockerbie bombing should be granted a fresh appeal will remain a secret.

The Crown Office, the Foreign Office and police have all failed to give their consent to an official request to disclose the material, as has Abdelbaset Ali Mohmed al Megrahi.

The revelation that the official Lockerbie papers may never be published is likely to prove embarrassing for those who have not allowed disclosure and the ministers who suggested the papers would be published.

It will also fuel the frustration of the families of the 270 victims who have waited more than 21 years for answers.

There was a clamour from politicians and relatives for the information to be released last year following the controversial early release of Megrahi on compassionate grounds. The Lybian had been sentenced to life imprisonment by a panel of three Scottish judges sitting in a special court at Camp Zeist in the Netherlands in 2001.

The Scottish Government said it wanted to see as much information as possible made public. But the information cannot be released without consent from the major parties.

The three-and-a-half-year investigation by the Scottish Criminal Cases Review Commission (SCCRC) concluded that there were six grounds for believing Megrahi may have suffered a miscarriage of justice. He was granted fresh leave to appeal in June 2007, based on these papers, but the appeal suffered numerous delays and last summer he dropped the case to improve his chances of returning home to Libya. He was expected to die within three months, but has survived more than nine.

Under the Crime and Punishment (Scotland) Act 1997, which created the commission to investigate potential miscarriages of justice, material can be disclosed “in any circumstances – permitted by an order made by the Secretary of State” using a simple piece of legislation called a statutory instrument.

Since devolution, the power has passed to Justice Secretary Kenny MacAskill and on December 21 he revealed that the statutory instrument would come into force on February 1.

At the time, MacAskill said: “The order laid today allows the SCCRC to disclose information it holds and it is now for them to decide what, if anything, they release.”

The Herald made a Freedom of Information request for the papers to the commission on February 1 which was rejected and, on appeal, the FoI commissioner upheld the decision because permission has not been granted by the main parties.

It is not known why Megrahi has not given approval.

Gerard Sinclair, the commission’s chief executive, said: “I believe that the decision of the Scottish Information Commissioner is the correct one, and the only decision he could have reached in light of the statutory prohibition which remains upon disclosure by the SCCRC.

“Over the last four months, there has been ongoing correspondence and discussions with the main parties concerned, but to date none of them has provided their unqualified consent to publication of the documentation. The commission continues to correspond with those parties, but is obviously not in a position at this time to disclose the documents concerned.”

A spokeswoman for the Crown Office said: “The Crown remains in discussion with the SCCRC and police on this matter, which raises a number of complex legal issues, and the suggestion that the Crown has refused permission is not true.”

Truth of Lockerbie Must be Disclosed

The questions over how Pan Am flight 103 came to be blown up over Lockerbie in December 1988, killing 270 people, have multiplied over the past two decades, with no definitive answers.

Hopes that information gathered by the Scottish Criminal Cases Review Commission (SCCRC) in its investigation of grounds for appeal by Abdelbaset Ali Mohmed al-Megrahi, the Libyan found guilty of the atrocity, would finally shed light on the murky background to the bombing have been dashed by a refusal to disclose the information.

Four months after the Scottish Justice Minister, Kenny MacAskill, used a statutory instrument to allow the SCCRC to release the investigation documents, the commission has refused The Herald’s request for disclosure under Freedom of Information legislation because it does not have the consent of the main parties involved: Megrahi, the Crown Office, the police and the Foreign Office.

This latest impasse is all the more frustrating because the SCCRC is willing in principle to consider releasing the Statement of Reasons, and the accompanying 13 volumes of appen­dices which were provided to determine whether Megrahi should be allowed to appeal against conviction.

It follows numerous delays to the appeal itself, the most significant one due to the refusal on grounds of national security to release a top secret document from an undisclosed third country thought to contain vital information about the timer that detonated the bomb. The mass of evidence gathered by the SCCRC during its three-and-a-half year investigation cannot now be subjected to examination and challenge in the Appeal Court because Megrahi dropped the case to improve his chances of returning home to Libya. With the commission finding six grounds for believing that Megrahi may have suffered a miscarriage of justice, that leaves far too many questions unanswered.

It is not known why Megrahi himself, having previously vowed to clear his name, has refused permission for disclosure. He has lived for longer than expected when released from prison last year and returned to Libya but remains terminally ill and, if he was wrongly convicted, that should be rectified sooner rather than later.

Despite the SCCRC’s continuing discussion on disclosure with the Crown Office, the Foreign Office and the police, it is difficult to avoid the conclusion that it is keen to avoid re-opening the diplomatic and political issues surrounding the Lockerbie bombing. The UK relatives seeking a public inquiry were told that was not possible while a criminal investigation was continuing. When that concluded, the Scottish Government and Foreign Office each said only the other had power to call an inquiry.

Many of the relatives of the victims are plagued with doubt about whether justice was done at Camp Zeist. For their sake, and to remove the uncertainty that has clouded the case and damaged the reputation of the Scottish justice system, it is essential that the truth is established. After 12 long years, that is the vital lesson of the inquiry into Bloody Sunday which is published today. Lockerbie remains the worst terrorist attack suffered in Britain; it must not remain unfinished business.