Is the U.S. a Fascist Society? Fascism is a Political Economic Structure that Serves Corporate Interests - The Constantine Report
0 SHARES

Civil Rights » Is the U.S. a Fascist Society? Fascism is a Political Economic Structure that Serves Corporate Interests

Most Americans are taught in school that fascism is a ruthless one party dictatorship, the most popular example being Nazi Germany. This is a misconception. Fascism is a political economy, not merely a political system that existed in one moment of history. Fascism, as defined by Black revolutionary and assassinated political prisoner George Jackson, is the complete control of the state by monopoly capital. Fascism is the last stage of capitalism in the heart of the US imperial center where the relationship between the state and corporation becomes indiscernible.  A difficult, but necessary, task for the left in this period is to acknowledge that fascism is the system of rule in the United States.

The privatization of the public sector, de-unionization of the entire labor force, and violent austerity are the seeds of domestically grown fascism in the economic realm.  Such fascist activity has brought about the rapid decline of political and economic conditions for the working class and the rapid accumulation of wealth and profit for the ruling class.

Workers are doing more and more on the job for less and less pay.  The jobless are either searching desperately for work or not searching at all.  Shelters are overflowing and turning the homeless away. The US has 25 percent of the world’s prisoners despite only possessing 5 percent of the world’s population.  Mass joblessness, poverty, imprisonment, and homelessness are material forces that breed fear and competition amongst the working class.

The paradox of fascism lies in its ability to sustain and grow in the midst of deteriorating conditions for the majority of the population. The racist foundation of this country is useful in this regard. The white working class steadfastly defends its privileges obtained from white imperial pillage of Black and indigenous people both here and abroad. The white ruling class maintains unity with the white working class because, although exploitation has heightened for everyone, Black and indigenous people (including undocumented immigrants) remain economically and socially oppressed to a much harsher degree than Whites.  To ensure racism does not precipitate a radical struggle between white supremacy and Black freedom, the US ruling class has molded and trained a Black political class. This class of neo-colonial elites, with Barack Obama leading the way, works in the interests of fascism by protecting the rule of the white ruling class while teaching the entire Black community that Black faces in high imperial places is not only desired, but also worthy of staunch defense.

Furthermore, fascism relies on a racist enforcement arm to control the political direction of the oppressed.  The expanded surveillance and military state that currently spies, detains, and wiretaps the 99 percent remains more dangerous and repressive for the Black community. The vast majority of wiretaps, police and vigilante murders, and stop-and-frisks happen to Black and brown people.  So instead of joining forces with the Black community to build a powerful movement, exploited white Americans can still rely on the state to enforce racism on its behalf. 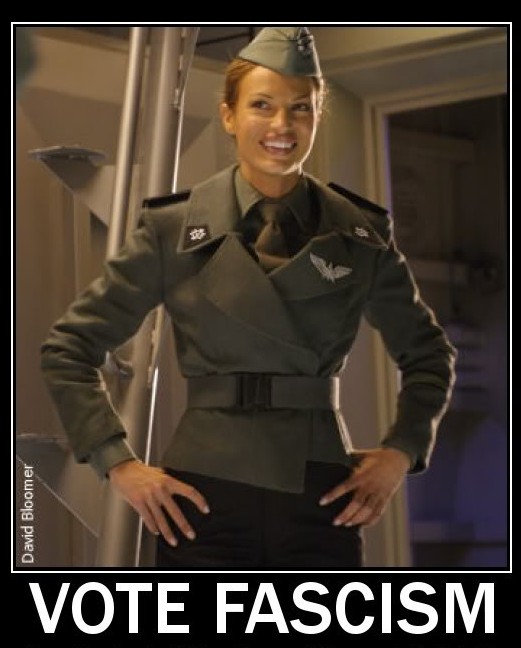 The US corporate media and education system provide the ideological chains of fascism.  In this period, both systems serve as mouthpieces for US imperial ambitions, values, and behaviors. Fascism is normalized in the American mind through the inculcation of racism, individualism, and a depoliticized and inaccurate conception of history and politics.  The US education system conditions the oppressed and oppressors into their positions in society. Black and indigenous youth attend factory schools that emphasize obedience to authority, which instills a dehumanized and subservient disposition for a future in low-wage work or prison.  From K-12, Black working class youth are taught to “pledge allegiance” to the flag of genocide and colonialism in over-crowded, police-occupied, and privatized schools.  White youth “pledge allegiance” in better-funded schools more capable of conditioning them into positions of power.  However, all youth are taught a mythological version of US history that applauds white supremacy, colonialism, and capitalist development as “freedom” and “democracy.”

The corporate media, despite being far more monopolized than the US school system, provides a more diverse means of education. Corporations like CNN and the New York Times habitually lie about the facts of political events to protect the white ruling class and its institutions from accountability.  Corporate hip-hop, music, and television entertainment compliment corporate news syndicates by doping the mind full of mindless garbage.   It matters little if the media of choice is watching “Scandal”, listening to Nicki Minaj on the radio, or reading the Washington Post. The boardrooms of five corporations are manufacturing consent to the US fascist system. Malcolm X succinctly summarized the function of the corporate media when he said “if you are not careful, the newspapers will have you hating the the people who are being oppressed, and loving the people who are doing the oppressing.”

Friday, April 4th was the 46th anniversary of Martin Luther King Jr’s assassination.  Although King never claimed that the US was a fascist society, he certainly was struggling with the fundamental structure of US society by the end of his life. Unsurprisingly, King’s opposition to racism, capitalism, and war placed a target on his life. The US government was found guilty of using its intelligence agencies to murder King in 1999.  The murder of King was part and parcel of the US government’s crackdown on the radical left, which is now imbedded in the legal framework of this country since the institution of the “War on Terror.”  King’s legacy should inspire us to dig deep into the roots of the type of society we live in and the type of society we want to live in.  George Jackson’s conclusion that the US indeed is a fascist society receives little attention from the US left. However, there is ample evidence that we should no longer be asking the question of whether fascism exists in this country, but rather, where do we go from here.

Danny Haiphong is an activist and case manager. You can contact Danny at: wakeupriseup1990@gmail.com.