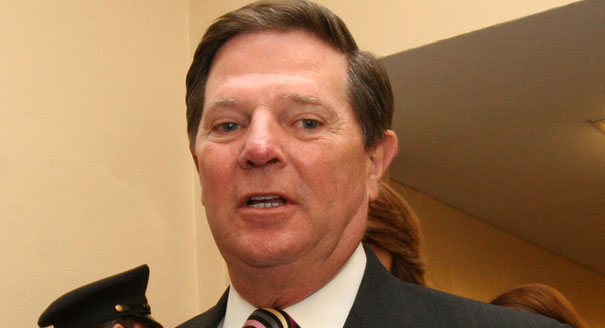 Tom DeLay has pleaded not guilty to money laundering and conspiracy. | AP Photo

"The Hammer” is heading to court.

Former House Majority Leader Tom DeLay is set to face trial in Texas on Tuesday four years after he resigned from Congress over allegations he illegally funneled money to GOP candidates in the state Legislature.

At the heart of the case is whether DeLay and his Texas allies used corporate “soft money” in 2002 state legislative races, which would be illegal under Lone Star State law. Texas Republicans were able to seize control of the Legislature that year for the first time since Reconstruction and redrew a number of Democratic-controlled congressional districts, a hugely controversial move that led to the ouster of several longtime Democratic incumbents.

In September 2002, an organization called Texans for a Republican Majority donated $190,000 to the Republican National State Elections Committee, an arm of the Republican National Committee. TRMPAC, which was founded by DeLay in 2001, made the donation to the RNSEC in the form of soft money. The RNC unit then donated the exact same amount in hard money — funds raised under federal donation limits — to Texas GOP state candidates.

In September 2005, DeLay was indicted by then Travis County District Attorney Ronnie Earle for conspiring to violate Texas election laws. Under House GOP rules, DeLay was forced to step down as majority leader, and the next summer, he resigned his seat in Congress rather than face reelection.

DeLay’s attorneys have been fighting the Texas case for years, claiming it was nothing more than political retribution by Earle and Texas Democrats. But a state judge earlier this year refused DeLay’s motion for a change in venue, opening the way for the proceedings to finally begin.

Pat Priest, a retired state judge from San Antonio, will preside over the case.

"I know there's negative feeling about Tom DeLay — and it's strong," Priest said in August, according to the Austin Statesman. He added that with proper precautions, "we can give Mr. DeLay a fair trial in Travis County."