The Urban Legend of Ronald Reagan - The Constantine Report
0 SHARES

The Urban Legend of Ronald Reagan

" ... The Right in America elevated Ronald Reagan to an almost mythical status that’s far from the Reagan Reality. A fair comparison would be the cult of personality of Kim Jong-il; and it seems to have produced the same results with some Americans. ... Ronald Reagan once said, 'Facts are stupid things.' His worshippers have this same philosophy. ... " 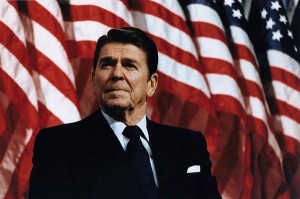 To write something negative about Ronald Reagan is akin to blasphemy in West Texas; but it’s distasteful to listen to phony politicians like Gingrich and Palin and to read conservative bloggers gush on and on about him. From reading all the unmerited praise on his 101st birthday, one would think he parted the Red Sea, resurrected people from the dead, and saved the free world from Communism all by himself.

There is not even one grain of truth in this deification of our 40th President.

Did you ever play the game of Gossip when you were a child? One person whispers a message to another and another, traveling around the circle until the last player announces the message. Remember the mistakes and how the announced message was so different from the original? This game highlights the unreliability of human recollection. The problem with the legendary Reagan mystique is the myths have been perpetuated so loudly and so long, they’ve magically evolved into supposed truth.

The Right in America elevated Ronald Reagan to an almost mythical status that’s far from the Reagan Reality. A fair comparison would be the cult of personality of Kim Jong-il; and it seems to have produced the same results with some Americans, just as Kim’s colorfully constructed myths have brainwashed the people of North Korea, so have the Reagan groupies brainwashed Americans with their selective amnesia of the facts of the Reagan Presidency.

Ronald Reagan’s Presidential persona reminds me of Willy Loman in Arthur Miller’s Death of A Salesman. Like Loman, Reagan personified the mistaken belief that the key to success in life is popularity and that all you need is “a smile and a shoeshine.” And like Arthur Miller’s tragic character, Reagan lived in the past; his oratory and policies were an attempt to drag America back to a time that only existed in the movies.

Thirty-two years later, we’re discovering the damage inflicted by his administration. I don’t believe he did it intentionally. He was an old man who ran his entire Presidency as if it was a movie with himself in the lead role, doing what he always did; act. And he delegated the management of America’s real work to a cast of evil men; resurrected in Bush Junior’s time. I’ll give him credit for this; he was the progenitor of White House politics as political theatre; the actor never strayed far from the stage.

Americans are themselves responsible for their buy-in to Reagan folklore. They jump on the Gipper bandwagon desperate for any version of the so-called good old days of America legend; the misty landscapes of the past when, in their vivid imagination, they believe that America as the “shining city on a hill” was reality, not mere oratory. I hate to tell people this, but most of this “shining city” song and dance is revisionist history. There was a lot of conveniently forgotten “bad” in the good old days that resulted in a lot of dead martyrs and morally comprised survivors.

Robert Lekachman, a well-known economist, summed up the Reagan years quite succinctly and accurately: "Ronald Reagan must be the nicest president who ever destroyed a union, tried to cut school lunch milk rations from six to four ounces, and compelled families in need of public help to first dispose of household goods in excess of $1,000...1f there is an authoritarian regime in the American future, Ronald Reagan is tailored to the image of a friendly fascist."

The anti-government, pro-corporate-rule Reagan Revolution messed up a lot of things for regular people and for the country. Charts, charts and more charts about anything and everything prove that things really changed around 1981; and not for the better. Statistics don’t lie; but he did a lot more damage than the charts and Lekachman convey.

He smashed the long standing, dependable safety nets of FDR’s New Deal; claiming they were based in Fascism. The corruption and subsequent bailout ($150 billion worth of “cleanup”) of the savings and loan industry happened on his watch. He met with the Taliban in the White House and claimed that they were, “the moral equivalent to our Founding Fathers.” We can attribute most of the situation we have in Afghanistan, Pakistan, Iran and Iraq to the positions and actions he took while he was President. He took credit for the fall of the Soviet Union (which, in reality, had nothing to do with him). He ignored the problem of AIDS, saying (in his autobiography) "maybe the Lord brought down this plague," because "illicit sex is against the Ten Commandments." His administration was one of the most corrupt in history with 138 administration officials having been convicted, indicted, or the subject of official investigations for official misconduct and/or criminal violations. During the Reagan administration the national debt tripled, the number of families living below the poverty line increased by one-third and unemployment hit ten percent. He was a polarizing figure to Black Americans and deaf to the pleas of apartheid victims in South Africa. And who could forget the Iran-Contra affair?

The saddest legacy of his Presidency, according to journalist, Sam Smith, is “convincing everyone that happiness was a free, unfettered market”…there was never any empirical evidence for his absurd economic assumptions because his charm sufficed where logic failed." And he was never blamed for anything; the media labeled him as the “Teflon President.”

I’d have to say the only sensible or useful thing that Ronald Reagan ever did was to pardon Merle Haggard.

To me, Ronald Reagan represents the “con” in Conservative and now his groupies want to resurrect that mythic con for their own devious purposes; don’t be fooled. The likes of Gingrich, Palin and right-wing bloggers spin the Reagan years as some Arthurian legend in Knights of the Roundtable.

Ronald Reagan once said, “Facts are stupid things.” His worshippers have this same philosophy.

Carol Morgan is a career counselor, writer, speaker and the author of Of Tapestry, Time and Tears, a historical fiction about the 1947 Partition of India. You may follow her on Twitter @CounselorCarol1, on Facebook: CarolMorgan1 and follow her writer’s blog at www.carolmorgan.org

Iran Contra, Cocaine & the War on Drugs in the 'Hood'