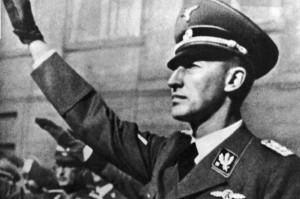 A portrait of General Reinhard Heydrich

The surroundings were utterly civilised – a villa overlooking a popular beach in Berlin.

The participants, enjoying gourmet cuisine and fine wines and discussing art and culture during breaks from business, appeared as ordinary and harmless as councillors at an average town hall meeting.

But the outcome of the infamous Wannsee Conference on January 20, 1942 – 70 years ago today – was previously unimagined barbarity. In just two hours, 15 politicians and administrators of the Nazi state sealed the fate of more than 10 million people. Here “The Final Solution of the Jewish Question in Europe” was determined.

These men, under the direction of SS General Reinhard Heydrich and his Jewish affairs expert Adolf Eichmann, decided how to exterminate all of Europe’s Jews. This systematic, industrialised genocide ran alongside the slaughter of gypsies, homosexuals, the disabled, prisoners of war and other enemies of the Nazis.

Today the victims will be remembered at ceremonies around the world – from the USA, to Israel and, of course, in Germany.

Despite the unspeakable sins of his father, when the Mirror this week tracked down Heydrich’s only surviving son Heider, now 77, he told us he would not be attending any of the memorial services – and even seemed to try to excuse his family history

“If you examine the files of the German foreign office and the files of the Eichmann trial in Jerusalem, you will not see a mention of a secret programme,” he stated. And yet Heydrich senior was so notorious for his zeal for mass murder that Adolf Hitler described him as “the man with the iron heart”. Until his assassination by British-trained Czech partisans, this evil loner was angling to succeed Hitler.

At his state funeral in Berlin the Fuhrer comforted the Heydrich children – while his troops murdered 1,300 Czech men women and children in retribution.

It can even be said that Heydrich started the Second World War.

In 1939, he led an operation in which German troops dressed as Poles attacked a German radio station on the border between the two countries. Hitler used the supposed attack as an excuse to invade Poland and trigger war.

Former SS member Karl Landesgericht later said: “The victims had to lie face down in a trench and were shot in the side of the head. The corpses were covered with sand before the next batch was brought up. In later operations, this was rarely done, so the next victims had to lie on the corpses of those who had just been killed.”

On his appointment as acting Reich Protector of Bohemia and Moravia – now in the Czech Republic – Heydrich oversaw the torture and killing of so many he gained the nickname “the Butcher of Prague”. But he deemed the methods of execution – hanging, shooting, explosives – as too haphazard and slow.

So the Wannsee Protocol was drawn up to focus famed German efficiency on the business of murder.

The result was the gas chambers in the extermination camps where Zyklon B pesticide was used to kill human beings on a scale beyond comprehension.

Thankfully not every descendant of those responsible for the “Final Solution” defends their Nazi relatives. The family of Hitler’s deputy Hermann Goering, who called the meeting but did not attend, are appalled by his actions.

Bettina Goering, his great niece, lives in Santa Fe, New Mexico. She and her brother were both sterilised because they could not bear the thought of carrying his bloodline to a new generation.

She said: “I had my tubes tied because I feared creating another monster.”

And Ricardo Eichmann, son of Adolf – who was responsible for the trains transporting Jews to death camps such as Auschwitz and Treblinka – is well aware of the kind of man his father was. The 57-year-old archaeologist said recently: “I went to see the deportation orders that my father had signed. I never wanted anyone saying I didn’t believe what he had done. I have no explanation why my father became the chief architect of the horrors of the Holocaust.”

Josef Buhler, who was at the conference and executed in 1948, represented the brutal German governor of occupied Poland Hans Frank, also hanged by the Allies. Hans’ son Niklas Frank, a godson of Adolf Hitler, has spent his life reviling his father’s memory. “My father was a slimehole of a Hitler fanatic,” he said. “He committed terrible crimes. I want nothing to do with his property, his name, anything. I often dream of the piles of corpses in the camps.

“My country will never be rid of that history. It is a story that is still not over.”

WHAT HAPPENED TO THE WANNSEE PARTICIPANTS?

SS General Reynard Heydrich was assassinated in May 1942 by British trained Czechoslovakian resistance fighters. 1,300 Czech men women  and children were murdered by the Nazis in retaliation.

SS Lieutenant Colonel Adolf Eichmann, oversaw transportation of Jews to extermination camps, escaped to Argentina after the war under false identity, until captured by Mossad agents, and tried and executed in Israel in 1962.

Wilhelm Stuckart, of the Interior Ministry, served three years and 10 months in prison after the war. Despite drafting anti-Jewish laws a German de-Nazification court simply fined him 500 deutschmarks in 1952. He was killed in a car accident a year later at the age of 51. There is much speculation it was arranged by Mossad.

Roland Freisler, a judge who was President of the People’s Court in Berlin where political show trials were held, was killed during a wartime air raid in February 1945.

Josef Buehler, second in command in the General Government in Poland, executed in Kracow, Poland in 1948 for crimes against humanity.

Martin Luther, Foreign Ministry, intrigued against Foreign Minister Joachim von Ribbentrop and was sent to the Sachsenhausen concentration camp. Freed by the Russians, he died in a Berlin hospital in May 1945.

Friedrich Kritzinger, State Chancery, possibly opposed the ‘final solution’. During the Nuremberg Trials, he stated he was ashamed of Nazi’s atrocities. Released, he died of ill health in 1947.

SS Squad Leader Otto Hofmann, Race and Settlement Office. Sentenced to 25 years in prison at Nuremberg, he was pardoned in 1954 and worked as a clerk in Wurttemberg until 1982, when he died aged 84.

SS Squad Leader Heinrich Mueller, Head Office for Reich Security. Last seen in the Führer’s bunker at the end of April 1945, and was reported missing without trace a month later.

SS Capt. Karl Schoengarth, security police, executed in 1946 after a British military tribunal after personally ordering the shooting of a British prisoner of war.

SS Captain Gerhard Klopfer was arrested for war crimes after the war but released due to lack of evidence. Worked as a lawyer and died in 1987, the last surviving participant of the Wannsee Conference.

Undersecretary Erich Neumann, commissioner for the four-year economic plan, was interned by the allies after the war but released due to ill health. He died in 1948.

Divisional Director Georg Leibbrandt, Ministry for the Occupied Eastern Territories, was interned until 1949 and a year later all charges dropped. Moved to America, studied Russian German and died back in Bonn in 1982.

Kristallnacht: Before the Glass Began to Break (Re “Jewish Week on (Gay) ‘Sex And Kristallnacht: The Boy Toy (And Boy Assassin) Who Started It All’”)

The Quiet Death Of A Nazi: Martin Sandberger's Last, and Only, Interview

The Nazi Monster Recruited by MI6 to Spy for Britain

A Holy Mission to Reveal the Truth about Nazi Death Squads