By Marisa Taylor and Erika Bolstad
McClatchy Newspapers | May 28, 2010 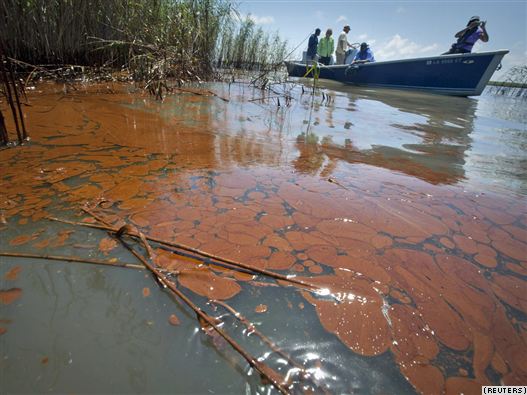 WASHINGTON — Federal regulators have complained in a scathing internal memo about "significant deficiencies" in BP’s handling of oil spill worker safety and asked for the Coast Guard's help in pressuring the company to address their litany of concerns.

The memo, obtained by McClatchy and written by a Labor Department official earlier this week, illustrates the government’s growing concern about potential health and safety problems posed by the oil spill and its impotency in forcing BP to respond to them.

BP says that it has deployed 22,000 personnel to combat the spill, which experts now estimate has spewed 37 million gallons of crude oil across the Gulf. At this point, much of the oil remains offshore.

David Michaels, the assistant secretary of labor for occupational safety and health who wrote the memo, raised the concerns on Tuesday, the day before seven oil spill workers were hospitalized after experiencing nausea, dizziness, headaches and chest pains. The workers were on boats off the coast of Louisiana.

In the memo to Coast Guard Adm. Thad Allen, Michaels said his agency has witnessed numerous problems at several work sites and staging areas through the Gulf Coast region.

“The organizational systems that BP currently has in place, particularly those related to worker safety and health training, protective equipment, and site monitoring, are not adequate for the current situation or the projected increase in clean-up operations,” Michaels said in the memo.

“I want to stress that these are not isolated problems,” he continued. “They appear to be indicative of a general systemic failure on BP’s part, to ensure the safety and health of those responding to this disaster.”

Michaels added that BP “has also not been forthcoming with basic, but critical, safety and health information on injuries and exposures.”

Michaels is raising the alarm about BP as his own agency is coming under fire for not being aggressive enough in monitoring the company or the contractors who are providing the oil spill cleanup training.

Graham MacEwen, a spokesman for BP, maintained his company was being responsive to any problems as they develop. “We consider safety a number one priority,” he said. “We will continue to try to improve our safety record.”

He said BP was also ensuring that cleanup workers are getting “very rigorous training,” adding that he was not aware of any systemic problems being raised by the Obama administration.

“Whenever we see any problems, we’re moving very quickly to resolve them,” he said.

Michaels, however, raised several significant concerns in his memo that he said were not being addressed including:

_ Lack of sufficient control over work sites. As recently as May 20, he said, the agency found over 800 personnel at one of the Biloxi sites without the required training.

_ Difficulty in obtaining adequate and timely data from BP on injuries and illness, chemical sampling, monitoring data and training materials.

_ Concerns that BP’s manager of workplace safety “does not appear to operate with the full support of the company, nor does he seem to have the authority necessary for the job which he has been tasked.”

“We strongly suggest that BP place someone in this position who has the authority and the ability to make changes expediently in order to address the safety and health of cleanup workers.” ...