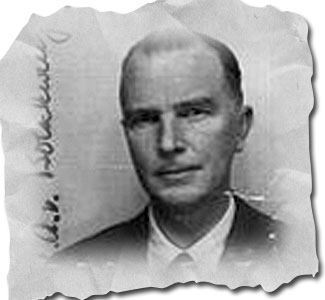 ... For the past 10 years, Otto Albrecht von Bolschwing’s care­fully con­structed life in Amer­ica has been com­ing apart a piece at a time. He was pres­i­dent of a high-technology invest­ment firm with head­quar­ters in Sacra­mento and sub­sidiaries in Sil­i­con Val­ley. It went bank­rupt in a 1971 scandal.

He was a dot­ing hus­band until his ail­ing wife killed her­self in 1978.

He num­bered among his busi­ness asso­ciates mil­lion­aires, bankers and sci­en­tists. Then his brain stem was hit with a rare dis­ease two years ago, send­ing him into iso­la­tion at a Carmichael rest home.

He told his friends he had worked for the Amer­i­cans dur­ing and after the World War II. But in May, the fed­eral gov­ern­ment began pro­ceed­ings to deport him for lying about his Nazi past.

In a widely pub­li­cized attempt to revoke von Bolschwing’s cit­i­zen­ship, the Jus­tice Depart­ment accused him of help­ing Hitler’s per­se­cu­tion of Euro­pean Jews, and of being an asso­ciate of Adolf Eich­mann, the archi­tect of Germany’s mass killing program.

The dis­clo­sures come at the end of a long, improb­a­ble career that took von Bolschwing through the Nazi hier­ar­chy, into the CIA and finally to the high­est lev­els of Amer­i­can business.

The list of peo­ple he knew, some of whom met him through a Cal­i­for­nia high tech­nol­ogy busi­ness ven­ture in 1970 reads like a Who’s Who. They include jus­tice William A. New­som of the 1st Dis­trict Court of Appeals in San Fran­cisco. Helene von Damm, Pres­i­dent Reagan’s per­sonal sec­re­tary. Thomas A. Franzi­oli, banker to the Boston Cabot fam­ily, Emanuel Fthenakis, Fairchild Corp. senior vice pres­i­dent. Elmer Bobst, pres­i­dent of Warner Lam­bert Phar­ma­ceu­ti­cal Co.; and Albert Driscoll, for­mer New Jer­sey gov­er­nor and Warner Lambert’s chairman.

... The fascist side of Pelosi’s pedigree may be found by exploring the background of one of her major benefactors, Gordon Getty, the son of oil tycoon J. Paul Getty. While he is a Republican, Getty has acted as a “major fundraiser for local and national Democratic Party candidates” and has even contributed to Pelosi’s campaign coffers (“Gordon Getty”). Gordon’s deceased brother, J Paul Getty Jr., provides a bridge between Pelosi and old-school Nazis.

J. Paul Jr. was a director of TCI, a high technology firm based in Sacramento (Carey). In 1970, J. Paul Jr. made Otto Albrecht von Bolschwing TCI’s president (ibid). What is little known about von Bolschwing is the fact that “he became a Nazi party member at the age of 24, the only member of his family to do so” (ibid).

At the age of 30, von Bolschwing took his Nazi political activism to a whole new level when he joined the ranks of the Nazis’ dreaded elite secret police, the SS (ibid). Von Bolschwing’s deeds as an SS captain would help build a Justice Department case for the revocation of the Nazi’s U.S. citizenship (ibid). Pete Carey elaborates:

According to the Justice Department, as an SS captain he [von Bolschwing] helped plan the expulsion of Jews from the German economy and developed anti- Jewish propaganda to force their emigration from Germany (ibid).

In 1938, von Bolschwing was collaborating with a group of Palestinian Germans who, according to a history of the SS by Heins Hohne, “lined their pockets by certain extramural activities” (ibid). Von Bolschwing was also spying on the Zionist Hagana army, a Jewish paramilitary organization that was part of the British Mandate of Palestine and would later become the nucleus of the Israeli Defense Force (ibid). These activities would cease when the British expelled von Bolschwing from Palestine for espionage (ibid).

The expulsion, however, did not end von Boslchwing’s Nazi activism. He reemerged in Romania as a government “oil expert” and, in 1941, assisted the leadership of the Iron Guard, Romania’s fascist political (ibid). With von Bolschwing’s help, the Iron Guard fled to Berlin after having “gone on a three-day rampage in which many jews – the estimates vary considerably – were killed” (ibid).

That same year, von Bolschwing may have played a role in the Aryanization of Dutch property when he joined the Bankvoor Oenroerende Zachen (ibid). It is the assertion of investigations that the Amsterdam bank forced the sale of “Dutch Jewish farms, businesses, homes and securities” (ibid).

In August of 1941, it appears that an anti-Nazi veneer was being constructed for von Bolschwing. With no formal charges against him, von Bolschwing was thrown into a Gestapo prison and then inexplicably released in April 1942 (ibid). In 1945, von Boslchwing assisted American troops entering Austria in the capture of Nazi officials and SS officers (ibid). This helped von Bolschwing gain the trust of U.S. Army Intelligence and the Nazi was soon working for the CIA as the end of World War Two gave rise to the East/West dialectical climate of the Cold War.

The Western power elite and their agents that comprise the sinister elements within the Intelligence Community hoped to use Nazis to manage the Cold War dialectic. The power elite required the existence of the Soviet menace to provide an adequate pretext for world government, but they could never let the communist world become powerful enough to overwhelm them. The Nazis who escaped prosecution at the end of the war were supposed to help maintain the delicate balance. For this purpose, former Nazi spymaster Reinhard Gehlen “helped the CIA build a spy network in postwar Europe, then became head of postwar German intelligence activities” (ibid). It is believed that von Bolschwing “became the controller of Gehlen’s CIA operation after Gehlen returned to the German government” (ibid).

Von Bolschwing immigrated to the United States in 1954 and worked several less-than-flattering jobs until he gained citizenship five years later (ibid). It was at this point, according to Carey, that von Bolschwing’s “career took a sudden upward turn” (ibid). It is almost as if the American power elite were waiting for von Bolschwing to gain the legitimacy he needed to be elevated. Carey shares some of von Bolschwing’s impressive resume:

He became an assistant to the director of international marketing at Warner Lambert Pharmaceuticals Co., developing close ties to the company’s president, the late Elmer Bobst, and its honorary board chairman, former New Jersey Gov. Alfred Driscoll, according to a close associate.

“His contacts at Warner Lambert were way out of proportion with his job,” the associate said. “Driscoll continued to write him recommendations for many years.” (ibid)

As was stated above, it is believed von Boslchwing took over Gehlen’s operation after Gehlen went back to Germany (ibid). Is Pelosi a conscious or unconscious agent of this postwar Nazi infrastructure?

Another intimation of Pelosi’s ... propensities is the relationship between von Bolschwing and William Newsom, a retired state appeals judge and the father of current mayor of San Francisco, Gavin Newsom. William Newsom became acquainted with von Bolschwing in 1969-70 when he was an attorney for TCI (ibid). Newsom and von Bolschwing traveled Europe together on Behalf of TCI during this period of time (ibid). ... The Pelosi family is extremely close to William Newsom. Pelosi’s brother-in-law was once married to William Newsom’s sister (Finnie) ...