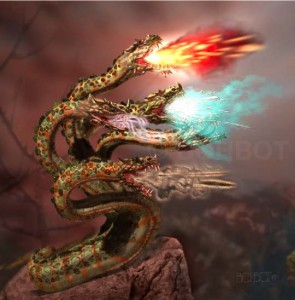 Remember the mythical hydra? Every time Hercules lopped off one of the monster's heads, two more grew in its place.

Over the weekend, The Boston Globe reported that Lawrence M. DuBuske, an asthma expert, left Harvard's Brigham & Woman's Hospital over new restrictions on how much professors there could be paid to speak for pharmaceutical companies. He pulled in $99,375 for giving talks for GlaxoSmithKline in the second quarter of 2009. It's not clear whether he is going to go to another academic institution or just rake in drug company dough.

DuBuske's departure serves as a wake-up call that it will not be as easy to remove the influence of pharmaceutical money as many opponents of financial conflicts of interest have assumed.
Academics are popular as speakers for pharmaceutical companies because they had instant credibility and an appearance of impartiality. But drug companies don't need academics. They can make experts out of community docs, then use those for speaking. Cutting them off from paying the academics just keeps the academics out of the system. It doesn't get rid of the system.
Speaking is one of the most powerful tools a drug marketer has. It benefits both the pharmaceutical brand and the speaker, who gets to be seen by his peers as an expert. But academic physicians are becoming more reluctant to give these talks, which are sometimes based on slides provided by the drug company.  Anecdotally, more and more of these talks seem to feature community physicians, says Steven Nissen, chairman of cardiology at the Cleveland Clinic. (For more on how this system works, see this piece by psychiatrist Daniel Carlat on his time as a speaker for Wyeth.)
Part of what makes academics such useful experts is that they are historically the people who run the clinical trials that are the main evidence a new medicine works.  That is changing. A report by the Office of the Inspector General of the Department of Health and Human Services notes that more and more clinical trials are being run by community doctors or at specialized clinical trial centers, because these can recruit patients more quickly. Pharmaceutical companies are perfectly capable of grooming an army of pharma-funded researcher-speakers without academic credentials.
Doctors can and do become powerful advocates for new drugs without the title "professor."  One of the speakers at an investor meeting for Seattle's Dendreon, which is awaiting approval of its prostate cancer immunotherapy later this year, was a South Carolina urologist named Neal Shore. I wrote that he was "over the top in his enthusiasm."

Non-academic physicians sometimes show up company press releases. Cephalon quoted Donald Taylor, of Comprehensive Pain Care PC in Marietta, Ga., in studies of its pain drug Actiq; he was an investigator in one of the company's clinical trials. In 2008 Sepracor quoted Sandra Gawchik, of Asthma & Allergy Associates, Upland, Pa., in one of its news releases. Sepracor is now part of Dainippon, the Japanese drugmaker.

If academics can't take big speaking fees from drug companies, there may be plenty of doctors elsewhere -- many of them capable scientists -- who will. There are a lot of reasons for regulating financial conflicts of interest in medicine. That doesn't mean such regulation is easy, or that it will be without unintended consequences