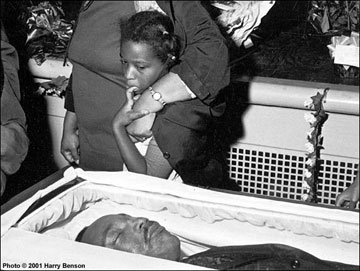 Conventional history would have the public believe that MLK’s assassin was a white, 40-year-old, career criminal, and fugitive from justice named James Earl Ray.

When MLK was killed by a single .30.06 bullet the evening of April 4, 1968, rioting broke out all across the country; America was on the verge of an all-out civil war. It was imperative that MLK’s killer be apprehended and brought to justice – quickly.

April 19, 1968, the FBI announced that they were looking for James Earl Ray in connection with the MLK assassination.  Eluding law enforcement for a couple months, Ray was arrested at Heathrow Airport, in London, England, June 8, 1968. July 19, 1968, Ray was extradited from England to Memphis to stand trial.

March 10, 1969, at the Shelby County Courthouse, James Earl Ray entered a “guilty plea” in the MLK assassination and received a 99-year sentence.

When I conducted a live, Q&A interview with Ray at the Lois M. DeBerry Special Needs Facility, in Nashville, March 25, 1998, the first question I asked him was if he killed MLK.  He responded with “no.”

But Ray was a career criminal, and all criminals lie, right?  So, then, it’s case closed?

For those with the ability to think for themselves and arrive at their own conclusions, here are a few facts to consider regarding James Earl Ray’s guilt/innocence:

• When Ray was extradited from England to Memphis, he was housed in a special cell in the Shelby County/Memphis Jail: Bright lights were on him around the clock.

He couldn’t use the restroom in privacy.  When Ray would happen to doze off for some much-needed rest, a guard would come in and roust him.  He was so closely monitored, that he and his attorneys had to get down in the floor and roll around and whisper in each other’s ears.

Attorney Mark Lane, who later represented Ray, stated that the conditions were comparable to a “Russian Gulag.”

• Attorney Percy Foreman, a.k.a. the “Texas Tiger, “convinced Ray not to take the stand, and instead enter a “guilty plea” to avoid the electric chair.

Troubling, though, is that when Foreman first took over as Ray’s lead defense counsel, November 1968, he told Jerry Ray, James Earl’s brother, this was the easiest case he’d ever taken, that the state-prosecution didn’t have any real evidence against James Earl, only the word of a drunk and fingerprints on a rifle they couldn’t ballistically match to the slug that killed MLK.

Further, Foreman didn’t even take murder cases where the defendant entered a guilty plea; it went against his reputation and colossal ego.

Why the legal spin at the end?

When he went to trial, he’d had virtually no sleep in the nine months leading up to the trial.

• James Earl admitted buying the alleged murder rifle – a .30.06 Gamemaster hunting rifle -- but claimed he handed it over to a man named “Raoul” April 3, 1968, day before the MLK assassination, and never again saw the rifle.

Sounds a little fishy, but three ballistics tests have been conducted on the alleged murder rifle, and all three proved inconclusive, meaning: A definitive murder weapon in the MLK assassination does not exist.

The third ballistics testing of the rifle was conducted spring 1997 under Memphis Judge Joe Brown (now of television court fame). “12 of the 18” bullets fired during this third round of testing had land and groove markings “dissimilar” to the slug extracted from MLK’s body.

Judge Joe was set to allow yet another round of ballistics testing, but, before he could do so, he was removed from the case by the Tennessee Court of Appeals.

• From the time he was incarcerated for the MLK murder, March 10, 1969, until he expired from liver disease, April 23, 1998, James Earl Ray adamantly fought to have the alleged murder rifle re-tested until a ballistics conclusion was reached.

Just as adamantly, the state and Memphis District Attorney General’s Office fought against the rifle being re-tested.

Obviously, the stances were bass-ackwards.