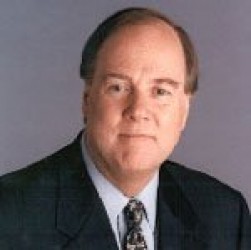 "... From 1999 to 2005, [Thomas] Donilon served as executive vice president at Fannie Mae, where, ABC News reported, he oversaw the mortgage giant's retroactively controversial lobbying efforts. ... Donilon did the debate preparation for Obama, associates said. He went on to cochair the Obama-Biden State Department transition team ..."

Thomas Donilon appears to be taking Scowcroft's advice to heart. A former assistant secretary of state for public affairs, Donilon has become almost entirely invisible to the outside world since assuming the No. 2 job in Obama's National Security Council.

Don't be fooled by his low profile, associates say. As deputy national security advisor, Donilon, 53, is the lynchpin of the interagency process. He runs the all-important deputies meetings, where the real foreign-policy options get ironed out. In a White House where policymaking is growing ever more complex, associates describe, Donilon's role is unmatched in importance.

Donilon is what keeps the government together, one associate explained on condition of anonymity. "He doesn't have time to talk; he runs the government when it comes to foreign policy."

"Donilon leaves the press to others," said former NSC official Philip Zelikow. "Meanwhile, he runs the machine. The way they have the system, Donilon chairs all the deputies meetings. To a significant degree, that is where the options are really roughed out, and the issues are narrowed for the principals discussion."

The way the Obama team has set up the NSC, national security advisor Gen. James L. Jones (ret.) wants the deputies empowered to speak for their principals, Zelikow noted.

"Policy design is choreography," Zelikow added. "The stars on stage" -- the principals, Secretary of State Hillary Clinton, Secretary of Defense Robert Gates, etc. -- "don't choreograph their own numbers. A lot of choreography is done at the subcabinet level, where people unroll things: ‘Are we going to have a meeting, what is the agenda.' The most important thing the deputy does is quality control of the staff work, to ensure the sheer quality of the analytical work" informing the options.

Associates note that Donilon doesn't come from the ranks of foreign policy wonkdom, however, but rather from the network of Democratic party insiders and operatives. Donilon's wife, Catherine Russell, has been named chief of staff to Jill Biden, the wife of Vice President Joe Biden, whose presidential campaigns Donilon has advised. And his brother, Mike Donilon, was a partner of Democratic consultant Bob Shrum, in the firm of Shrum, Devine, and Donilon. ...

From 1999 to 2005, Donilon served as executive vice president at Fannie Mae, where, ABC News reported, he oversaw the mortgage giant's retroactively controversial lobbying efforts. An Iraq advisor on Biden's recent presidential campaign, Donilon endorsed Obama after Biden dropped out. Donilon did the debate preparation for Obama, associates said. He went on to cochair the Obama-Biden State Department transition team, where he helped vet appointments, before being named deputy national security advisor.

In recent years, Donilon made concerted efforts to burnish his foreign policy expertise, becoming a member of the Aspen Strategy Group and a trustee of the Brookings Institution. ...