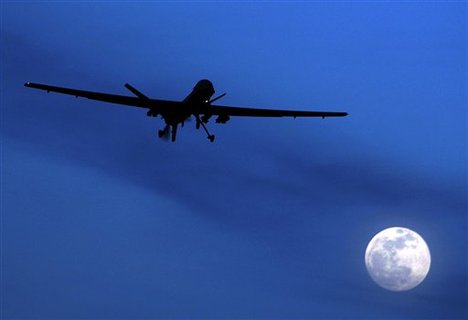 Legal experts have warned US legislators that the shadowy CIA drone assassination programme in Pakistan is a “clear violation of international law” that exposes drone pilots to the risk of prosecution.

At a Wednesday hearing of the House national security and foreign affairs subcommittee in Washington, University of Notre Dame Law School professor Mary Ellen O’Connell said that drone use was only legal on sharply defined battlefields – and only when used by the military.

“Outside of a war or an armed conflict, everyone is a civilian when it comes to the use of lethal force,” Ms O’Connell said. She insisted that “the combatant’s privilege to kill on the battlefield without being charged with a crime applies inside an armed conflict and not outside.” Ms O’Connell also said that “only a lawful combatant” – not a CIA agent or a mercenary – could carry out a drone strike. The CIA and civilian contractors have no right to do so because they do not wear uniforms and they are not in the military chain of command – and most importantly they are not trained in the law of armed conflict.”

The CIA strikes are “a clear violation of international law,” Ms O’Connell stressed.

David Glazier of Loyola University is a former  research fellow at the Center for National Security Law, and a pro bono consultant to Human Rights First

But Loyola Law School professor David Glazier, a former navy surface warfare officer, disagreed. Mr Glazier argued that “enemy forces” were legitimate targets anywhere. And he contended that it has historically been considered lawful to conduct limited military operations in countries not directly involved in a conflict.

But Mr Glazier acknowledged that pilots operating the drones from afar could be dragged into the dock in the countries where the attacks are mounted because the CIA drone pilots aren’t legally combatants. “CIA drone pilots are liable to prosecution under the law of any jurisdiction where attacks occur for any injuries, deaths or property damage they cause,” Mr Glazier declared.

According to a conservative analysis by the US New American Foundation think tank, US drone strikes in Pakistan between 2004-10 killed between 830 and 1,210 individuals, of whom around 550 to 850 were “described as militants in reliable press accounts.”

UN Special Rapporteur on Extrajudicial Executions Philip Alston has called on the Obama adminstration to clarify the legal justification for the remote-controlled air strikes, observing that they “might violate international humanitarian law and international human rights law.”

CIA spokesman George Little insisted on Wednesday that the organisation’s counterterror operations are “conducted in strict accordance with the law.”