The Fascist Conspirators at the John Birch Society Celebrate a Birthday 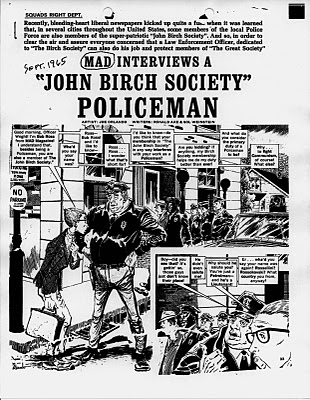 On this day in 1958, Robert H.W. Welch Jr., a, retired Boston candy manufacturer, formed the John Birch Society, a conservative, membership-based organization dedicated to supporting free enterprise and to fighting what it sees as growing threats to the U.S. Constitution and the Declaration of Independence.

Welch named the new society in honor of John Birch, regarded by the group’s backers as the first American casualty in what was to become the Cold War. In 1945, Chinese communists in the northern province of Anhui killed Birch, a Baptist missionary and U.S. Army intelligence specialist.

Initially founded in Indianapolis with only 11 members, the society had grown by the early 1960s to some 100,000 subscribers.

At the time, it assailed such mainstream Republicans as President Dwight Eisenhower and Earl Warren, the chief justice of the Supreme Court, for their alleged failure to stem a purported vast communist conspiracy that the society claimed existed within the U.S. government.

As the society’s influence grew, conservative mainstream office seekers were often called upon by reporters and rivals to avow whether or not they supported the society’s agenda.

According to the society’s website, the group “labors to warn against and expose the forces that seek to abolish U.S. independence, build a world government or otherwise undermine our personal liberties and national independence.”

The group supports Rep. Ron Paul (R-Texas), a candidate for the GOP presidential nomination, as the only member of Congress to score 100 percent on its “Freedom Index.”

According to the New American magazine, a society publication, the index “rates congressmen based on their adherence to constitutional principles of limited government, fiscal responsibility, national sovereignty, and a traditional foreign policy of avoiding foreign entanglements.” Paul earned his perfect score based on the society’s examination of 10 recent key votes.

TM & © THE POLITICO & POLITICO.COM, a division of Allbritton Communications Company