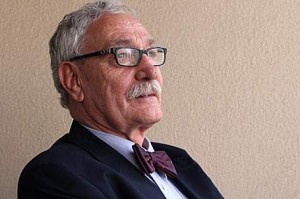 The ears gave him away.

It was during the early 1970s in Peru that John Schneider-Merck, a keen adventurer and import-export businessman, first ran across a suspicious-looking fellow who called himself Klaus Altmann.

“I used to come down from the Andes mountains to visit the city and along the way I would stop at a German friend’s house for a drink,” says Schneider-Merck, who has lived in Dubai since 1976. “This man Altmann was always hanging around.”

Altmann turned out to be Klaus Barbie, the infamous head of the Gestapo in Lyon during the Second World War. Schneider-Merck said he contacted the Holocaust survivor and Nazi hunter Simon Wiesenthal after realising the similarities between the man who called himself Altmann and old photos of Barbie.

“As you get older, many things change,” he says. “But the ears, they stay the same.”

As Schneider-Merck recalls, Barbie was a secretive and conniving man who swindled him out of 2kg of gold, the equivalent of $500,000 (Dh3.85m) at the time.

“Once I was saying that Hitler had destroyed the reputation of Germany,” he says. “Then he stood up and said, ‘In my presence, no one will say anything negative about der Führer.”

Schneider-Merck’s early suspicions played a role in the eventual extradition of Barbie to France, where he was put on trial for war crimes and sentenced to life imprisonment. Barbie died in prison of leukemia just four years later at the age of 77. And Schneider-Merck, now 70 years old, ended up in the Emirates where he is still in the import-export business. He is among a select cast of yarn-spinners that tell of an earlier frontier lifestyle lived by expatriates around the world.

His story of Klaus Barbie intersects with other tales of intrigue and failed justice. It was also later revealed that another member of the German Chamber of Commerce in Peru was Frederick Schwend, a Nazi colonel who ran a major counterfeit-currency operation during the war. He also made the acquaintance of one Otto Skorzeny, who was personally selected by Adolf Hitler to liberate Benito Mussolini from the Imperatore Hotel at the top of the Gran Sasso mountain and later created a secret organisation to help Nazis escape Germany after the war.

“Those were interesting times,” Schneider-Merck says of his South American days.

For the last 34 years, he has run a full-time business importing car parts and other goods to the region, but he has also emerged as the man to call when a German gets in trouble. “I’ve been here since the days when you could just show up at Sheikh Rashid’s house for a meeting,” he says.

Schneider-Merck, whose business card lists his phone numbers in Dubai, Baghdad and Tehran, spends much of his free time visiting prisoners in Al Awir prison or making calls to help German citizens out of a sticky situation.

In 1997, he helped Helmut Hofer, a German businessman who was accused of having had sexual relations with a Muslim Iranian woman in Tehran. Hofer was sentenced to 99 lashes, followed by death, but was eventually freed in 2000, according to news reports.

Each case and business transaction he handles has its own blue folio that he stores along the walls of his office and in a large storage room that is bulging with decades’ worth of work. “I never throw anything away,” he says.

His interest in helping prisoners comes from a “hatred of torture”.

“Criminals in many countries are treated terribly,” he says. “There is a standard for what should happen when you are arrested.”

Schneider-Merck can trace his taste for travel and adventure to his childhood. Once his father decided to send him on his own to summer school to study English, but he got off the train at the next station and sold his ticket to someone else. With the cash he headed to Crete by way of what was then Yugoslavia and Greece.

“I slept in monasteries and travelled all over the island,” he says. On an earlier trip he rode a bicycle all across England. But when he graduated from university – a rarity in his family – there was really only one line of business for a Schneider-Merck: trade.

His forefathers hail from a line of traders, bankers and pharmaceutical manufacturers that dates back hundreds of years. Schneider-Merck wears a ring with the blue stamp of his family’s crest, which he uses to seal documents with wax.

His twin brother, Kim, who is younger by 45 minutes, was always “the clever one”, Schneider-Merck says. “He would send me out to the dangerous places to check them out.” Via e-mail, Kim writes that it would be “a very good idea to write TRUE STORIES of all the dangerous adventures of JOHN’s life … South America alone is more than good enough for one Hollywood movie”.

In a lengthy diatribe about the events in Germany in the 20th century, he added that “all COMMUNISTS ARE DIRTY LIARS, CROOKS and CRIMINALS” and intimated that John was an organiser of a plot involving plastic explosives from Australia that were smuggled into West Berlin and ignited with “Spanish rural cigarette lighters”. Schneider-Merck says that those events took place in 1961, when as a student he helped organise a group of young students who blew holes in the Berlin Wall. “No one was injured, thankfully.”

After years in South America, Schneider-Merck headed to Dubai for a short assignment to assess the abilities of a new local manager that the family company had hired. Schneider-Merck later decided the man in question was a “nincompoop”.

He decided to take the job himself and make his home in the UAE. Dubai of the 1970s and 1980s was, to him, a trader’s town with constantly arriving ships and dockside deals – not unlike the Hamburg of his childhood. He recalls that one of his early bright ideas was to buy old American barges to unload cargo from ships that were stuck in kilometre-long queues outside the port.

“The only newspaper read back then was a leaflet printed by hand that listed the ships waiting to get to the port,” he says.

The new neighbourhood of Jumeirah was mostly desert when he arrived, known only for the Chicago Beach Hotel, which was demolished to make way for the Burj al Arab.

Pictures on the wall of his Deira office show holidays spent wandering the age-old streets and souqs of Sana’a and Damascus, where he often brought along his children. He enjoys spending time at his small farm in Tehran where he is breeding small Caspian horses.

“I believe I’ll be here for a while more,” he says with a mischievous grin. “I guess I’m a bit of an adrenaline junkie.”