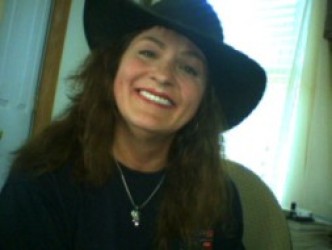 If Your Son Dies In Baldwin County, Alabama, don't ask questions. Else Kentucky and Georgia and the railroad track boys will jump in and destroy your life.

Why should Americans fear Bin Laden when they're afraid of their own AMERICAN CRIME-INFESTED POLITICIANS and CORPORATIONS?

At the time my son died in Alabama Republican FOB James was Governor. His home county is Baldwin County. It's one of the fastest growing counties in Alabama. It's where the dog tracks could dispose of spent greyhound racing dogs discarded dirt cheap, and where it's difficult to determine who the sheriff really is.

Not too far away Karl Rove has a little beach house.

I had understood John Garner, who investigated my son's death, was sheriff. He'd said I'd have to get a subpoena to get the PUBLIC police records recording details of my son's death. Later, I'd discover Garner wasn't sheriff, at all. Sheriff Johnson gladly sent me the files, WITHOUT a subpoena.

These are notes regarding my son's death, body shipment and discussions with Alabama authorities regarding his "suicide." 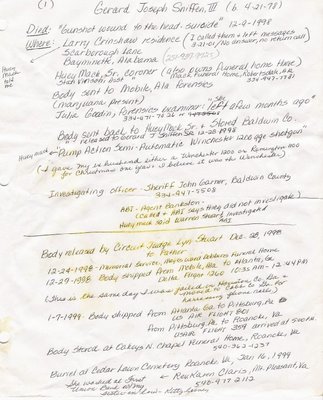 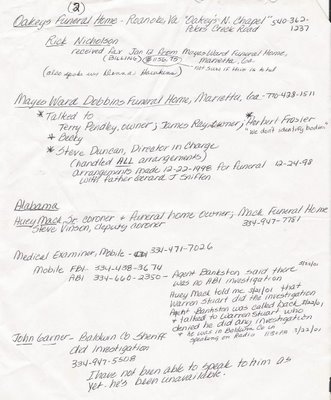 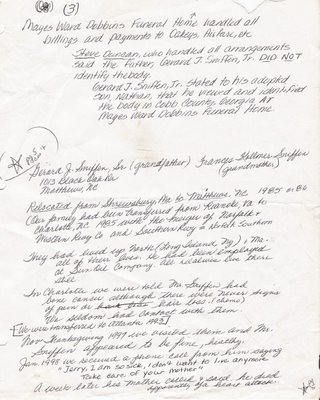 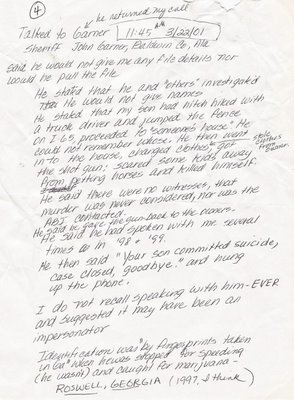 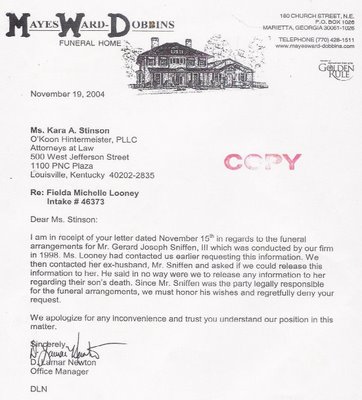 WHO IS MRS. ROSE?

She came to my son's burial and traveled from Atlanta, Georgia to Virginia to attend. She was a stranger among family and friends. Members of my Virginia family asked, "Who was the older lady there at the grave site with her little girl?"

Later I'd learn Mrs. Rose was a married woman from Kennesaw, Georgia. She worked at a craft store where she had met my son, and then is said to have had an extramarital affair with him. She must have been twice his age.

She had said she hated her father.

"Because he kills people and covers up the murders," she'd said.

My source said, "If you tell anybody this, he'll kill us, too."

("Should I be afraid of this American Military retired officer? I've done nothing to this man," I thought.)

I thought her father must be in the organized crime group I had wrestled with in Georgia which was connected to Kentucky, and who had killed my son in Alabama. But he apparently was a retired US Army General.

Strange how many retired Army people had been involved in destroying my life and child. Nell Stumpff, the Georgia landlord had said her ex-husband was a retired US Army Captain. In fact, she'd bragged they'd spent 12 years in Dachau, Germany and she was supplied with fraulein maids while the family was stationed there.

Not only did she have Alabama connections through dog shows, she had taken me to two dog shows there, in Birmingham and Montgomery. I was introduced to a man Nell said was "Jack Onofrio" at an Olive Garden restaurant there.

I knew "Jack Onofrio" was the name of a dog show, AKC superintendant, but was he a real person? I wondered it at the time, and it had given me more reason to distrust the woman. Her son, Steve, was apparently involved with drugs and had some terrifying friends who frequented the trailer Nell had provided for him.

But she'd also said her retired, US Army Captain ex-husband had once "owned a farm in Alabama," but "lost it." She'd said he had remarried another dog show person and was living in Florida. The one time he visited Nell when I lived there, they merely whispered at the front door, so I never had the pleasure of making his acquaintance.

Another US Army, retiree was apparently my husband's attorney, Michael Broadbear. Internet accounts indicate he was a Captain in the US Army, in Vietnam, and at one point he was also active in Veterans organizations.

After moving to Kentucky, I was being landed upon by "interested" men, and would gather information about them for their interests, surprised to learn of more retired US Army connections.

Because the police turned the other cheek, the FBI shelved the case, I realized my son's murder was of little interest. The cover-up had been well orchestrated, by experts and powerful people.

"SUICIDED" is the word for silencing witnesses. It's a carry-over from the Twentieth Century, organized crime, corrupt government, and the world of illegal drugs that has taken down what was once a great country.

We've produced wonderful tv shows conditioning Americans to believe we are the greatest crime-solvers in the world.

Is the truth instead, that we've plenty of champions at drug running, smuggling, murder, organized crime, cover-up: and our politicians have protected it and profited from it for fifty years?

It's a big organization, and it's not "Al Quaeda." How does it connect throughout the South? Southerners killing Southerners, Southern Families selling poison to their own children. Dixie Mob Boys? Bluegrass? Cornbread killers rotating the streets to keep crime rising for security stock prices?••••••••••••This segment is published in memory of Tommy Schlette, of Melborne, Florida who died of "overdose" in Melborne, Florida, May 3, 2006. Sorry you were caught up in this mess, Tommy. Thanks for the friendship: RIP

NY Times: Blackwater Founder Is Said to Back African Mercenaries

NukeGate: A.Q. Khan Interview – “The U.S. Sold Us Nuclear-Specific Components of the Bomb”

UK: The Provincial Lawyer who is Helping Plot an Emirate Coup with US Lobbyists & Special Forces