The Death of Salvador Allende: Murder or Suicide? 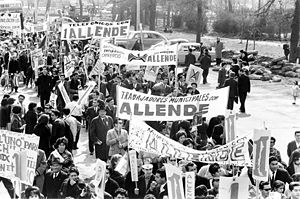 The body of former Chilean President Salvador Allende was exhumed in May in an attempt to determine whether the democratically elected Socialist president was murdered by the Chilean military in the initial stages of the coup or whether he committed suicide as General Augusto Pinochet claimed on that day, September 11, 1973.

The sixty-five year old president had been in office for three years. An official investigation has also been opened in the death of world renowned Chilean poet Pablo Neruda, who died on September 23, 1973. His death, the junta reported, was from prostate cancer, but the newly released military files indicate he too may have been murdered by the Pinochet regime. Neruda was sixty-nine at the time of his death. Neruda’s driver has said that he (Neruda) had been poisoned by Pinochet’s henchmen.

Judge Mario Carroza ordered investigations into both deaths. While most appear to support the investigations, some say they will “open up old wounds.” While Pinochet continues to have supporters on the Chilean right, most Chileans want to see the truth, and perhaps justice.

The wanton nature of Pinochet’s regime and their foreign backers, particularly U.S. President Richard Nixon and Henry Kissinger, have always called into question the true nature of the oft self-proclaimed “greatest democracy in the world” and its foreign policy. Even prior to Salvador Allende’s election to the presidency in 1970, the U.S. government was at work interfering with Chile’s internal affairs and sovereignty. For example, Nixon and Kissinger had funneled several million dollars to candidates opposing Allende before the election and continued funding opposition figures after the election.

Allende’s first act as president was to make sure that all school children had milk. In part, this policy was enacted because he, as a medical doctor, saw developmental deficiencies in many poor children. Therefore, he concluded that the inclusion of milk in their diet would greatly improve their health and well-being.

At the same time, Allende and his Popular Unity Party allies were prevalent among the copper miners, union people in general and shantytown dwellers. Accordingly, the political right, rich and foreign corporate interests, particularly Kennecott Copper, Anaconda and ITT, were all set in opposition to Allende. This was especially the case since he aimed to nationalized most major corporations in the belief that the revenue from a nation’s resources should be directed towards the common good, social development and poverty alleviation rather then to enrich the already wealthy elites and foreign corporations.

So it is understandable that Nixon and Kissinger were very active in attempting to manipulate Chile’s internal affairs immediately after Salvador Allende’s election. Indeed, the first act in relation was the assassination of General Rene Schneider on October 22, 1970. (People should not forget that the first 9/11 type of event is considered by many researchers to have taken place in 1973 and was an act of state terrorism against the democratically elected government of Salvador Allende in Chile.) The assassination of Rene Schneider, who was sympathetic to Chilean democracy, opened the door for Pinochet to lead the military.

“60 Minutes” aired an episode outlining the Schneider story just a few days before the second (the US) 9/11 occurred. The timing perhaps was appropriate.

Throughout the Allende presidency, as he was implementing programs to achieve the realization of his social and domestic policies, the U.S. was running constant interference with Chile’s trade relations and international banking relations. Therefore, the reality with Chile is that we were never allowed to see what a free, socialist Chile would have looked like because of the constant interference and ultimately violent U.S. led opposition to a democratically elected, socialist president.

(It is easy to imagine the reasons that a successful socialist-leaning country would pose a serious threat to the USA in relation to its prevalent economic models, political system and connected ideological underpinning. In relation, the destruction or marginalization of such a country, in tandem with propaganda about socialism, is an acceptable and longstanding US policy whether involving Salvador Allende, Venezuela’s Hugo Rafael Chávez Frías or any number of other leaders who would cut into maximum earnings by US favored corporations in order to serve their own countries’ people. Under the circumstances, perhaps US citizens can learn a lesson about their own present economic conditions.)

So after the coup with the US’s darling Pinochet in power, Kennecott and Anaconda were free to extract Chile’s mineral wealth with no concern for the society, justice, nor ecological considerations. Instead, profits and other sorts of self-serving gains were the main concerns, just as they are today vis-à-vis the US government’s cozy relationship with big business at the expense of average people in their own and other nations.

All considered, Chile’s current willingness to take an honest look at her history is commendable, as the pursuit of truth and justice are sorely needed when such grievous wrongs have existed for so many countrymen in the fairly recent past. (The most common number of civilians killed by Pinochet’s regime is “over 3,200.” It’s apparent that the number is way more then 3,200, but its hard to find a more specific sum since much of the slaughter was undertaken in a clandestine manner.) Moreover, Chile’s example in such an honest self-examination could eventually be emulated by many other governments, including West Papua’s in Indonesia.

A close but almost totally ignored parallel to Chile’s resource wealth and corrupt history is West Papua, Indonesia. West Papua is one of the most resource rich places on Earth with large amounts of gold and copper. Despite the tremendous resource wealth, most of the people residing there live in extreme poverty. Further, West Papua was taken over by Indonesia during the time of the Suharto dictatorship, and with (of course) the blessing of the US government.

Such a blessing is understandable in light of the fact that the primary beneficiary of wealth extracted to date has been the U.S. based mining company Freeport. Indeed, U.S. corporate interests continue to reap the resource wealth across the world while demonstrating little or no concern for the populations or environment in those places that are making them rich. So Freeport is hardly the exception to the rule in its partnership with the brutal Indonesian military, involved in many human rights abuses, serving as Freeport’s main security force.

West Papua is and has been for over forty years under occupation by the Indonesian military, that is in turn supported by the U.S. with arms and periodic training arrangements paid for by the US taxpayers. As we wait to find out the truth concerning Salvador Allende and Pablo Neruda, we should bear in mind that their history is simply one component in our struggle for truth and justice — a longstanding, ongoing and never ending process that must never be abandoned. 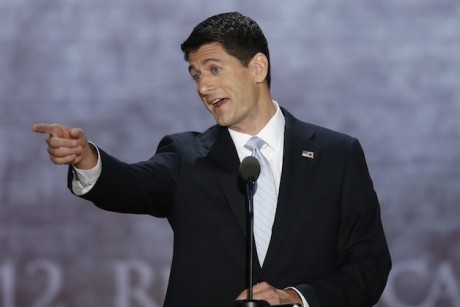 Paul Ryan Blames Minorities for Getting Themselves Shot
Oct 12