THE COVERT WAR AGAINST JAMES BROWN THE GODFATHER OF SOUL vs. THE MUSIC INDUSTRY'S GODFATHERS OF CRIME 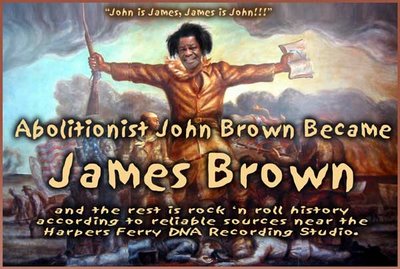 "Brown proceeded to tell Alpert the mob had such control over the music industry that it could demand huge kickbacks from most performers.... "

Brown's act? You had to be there
James Brown was electric on stage

"Be sure to get a good shot," Robert Cooper said as he handed the digital camera to his lanky, 16-year-old son, Davis.

The two were standing in front of the Apollo Theater, amid the throng of thousands of mourners who flocked to Harlem yesterday from near and far to bid farewell to the Godfather of Soul.

Cooper, a jazz saxophonist, has called Vienna home for the past 14 years. It was there that he and his son first heard a live performance by James Brown some six years ago.

Even though Brown was past his prime, "His music was simply amazing," Cooper said. "All the Germans and Austrians in the audience couldn't stop dancing from the moment he started his act." That's how it always was with Brown.

No matter how great his music, it was incomparably better when he was on stage live.

Filmmaker Jon Alpert was a young NBC reporter more than 25 years ago when he first saw Brown in concert.

"A friend once told me, 'Don't die before you see James Brown perform,'" Alpert recalled yesterday. So in 1980 he went to the Beacon Theater where Brown was the headliner and the Ohio Players were the opening act.

Brown was at the height of his artistry and already a legend, but the theater was practically empty.

"He gets on stage and rips the roof off the place, he was so good," Alpert said, "But I couldn't understand why there was nobody in the audience."

In the middle of his Beacon act, Brown dropped to his knees and began his trademark soliloquy as the band played in the background.

The words that came out stunned Alpert.

"Look around you; the theater's empty," Brown said that night. "The MAFIA's freezing me out. I can't get on the radio or TV. I can't get a record contract. If you're independent in this industry, they freeze you out."

Alpert, who has won 12 Emmys over the years, was mesmerized. He rushed backstage after the show to meet Brown and found him in his dressing room under one of those big hair dryers.

Next to him, sitting under another hair dryer, was the Rev. Al Sharpton.

Brown proceeded to tell Alpert the mob had such control over the music industry that it could demand huge kickbacks from most performers.

"I own myself. I manage myself," said the man who made "I'm Black and I'm Proud" a virtual black national anthem.

"But if you don't give them what they want, they freeze you out."

Alpert offered on the spot to do a documentary to expose graft in the industry. Brown, one of the biggest icons in the history of music, agreed. For several weeks after that, Alpert conducted hours of interviews with the performer. He traveled with him all over the city, questioning key industry people and filming several Brown concerts.

"I thought it was going to be the greatest documentary ever made," said Alpert, who recently directed the gripping HBO film "Baghdad ER."

Then Brown signed a new contract with a major record label. Soon after that he stopped answering Alpert's phone calls.

"He doesn't want to rock the boat," one of Brown's aides told Alpert.

Without Brown, the great exposé of the music industry never got made, though Alpert still has the raw footage.

In the end, the Godfather of Soul chose not to defy the godfathers of crime.

And who among the millions of us whose lives were enriched by Brown's music could say that was not a prudent choice?

Also outside the Apollo yesterday was Deborah Mitchell, 53, who waited patiently in a wheelchair for a chance to pass Brown's coffin.

"I never saw him perform in person, so I figured I should at least come see him now," said Mitchell, who was just a teenager when she first heard one of Brown's songs. My favorite was one you never hear these days, 'Don't Be a Dropout,'" she said. "They should play that more for these young people. He had a message for everyone."